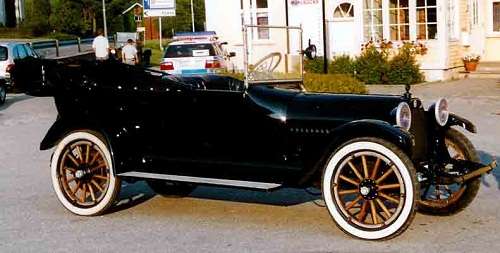 Kansas man the acknowledged guru of the vintage Studebaker

Those concerned with keeping a model of the long gone Studebaker line road or show worthy know the name of Vern Ediger. In addition to his Halstead KS E&V Motors, he owns a salvage yard with over 120 of the vintage automobiles providing recycled parts to collectors and restorers around the globe.
Advertisement

In the year 1900, Studebaker was the top vehicle manufacturer in the Americas, having built up their carriage business since its beginning in 1852. They built their first electric powered vehicles in 1897.

The company was incorporated in 1911 and ceased production of electric vehicles that year. They began building what was to become a respected brand for the next forty years – ultimately merging with Packard until the final models of either marquee rolled off the lines in 1958.

These cars, orphaned for over 50 years, are Ediger’s passion, according to the story posted today by Mike Berry on Greenwichtime.com. Among his collection are three shining examples of the model line: a rare 1949 Land Cruiser sedan, a remarkable 1952 2R6 pickup and a slick, sporty 1960 Hawk coupe.

"I had one in high school just like this," Ediger is quoted as saying, pointing to the gray Land Cruiser with its rear-opening suicide rear doors. Its 6-cylinder flathead, served him well though it was no hot rod, he said.

Ediger’s father bought several trucks from the brand during the ‘40s, so you might say he grew up in Studebaker family. Upon hearing tell of a Land Cruiser sedan, he went all the way to Pennsylvania to find it in the basement of a former dealership, with a non-functioning motor.

"I had a motor for it that I stuck in it and I drove it ever since without doing anything to it," Ediger said. "This was their big car, to compete with the smaller Oldsmobiles and Mercuries," he said, mentioning the 6 inches in length the Land Cruiser had over the Commander series and a 245 cubic inch flathead 6, their largest engine.

Noticeable for the upscale trim and rear vent windows, "This was top of the line at the time,” he said. “There were no upgrades on the inside or the outside to make 'em fancier."

He converted it to a 12-volt electrical system and a friend, John McCall, installed brand new upholstery. McCall has a degree in Auto Restoration fro McPherson College.

The car came with a 3-speed manual transmission plus overdrive.

"If I'm going to go on a longer trip, this is the one. My wife (Sally) loves this one. It's like going down the road in an easy chair," Ediger stated.

According to Ediger, it gets 22 mpg on the highway and look greats with its custom rear venetian blinds and Goodyear wide whitewall reproduction tires.

He has vehicles from Oldsmobile, Buick, Mercury and Ford, but his passion obviously sits behind the wheels of the vintage Studebakers he prizes.