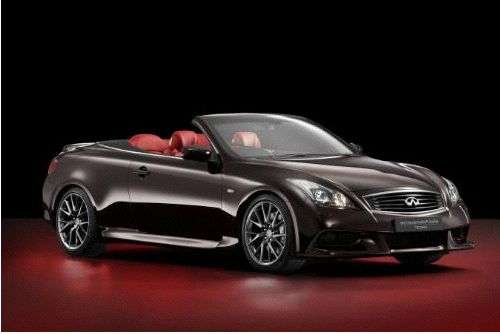 In the spring of 2012, fans of open-air driving will have an attractive new option – the Infiniti IPL G convertible will appear in showrooms – a hard-top decapotable (if you’ll pardon my French) focused on total vehicle performance on the road and in the driver’s seat.
Advertisement

"The Infiniti Performance Line, as demonstrated by our first offering, the IPL G Coupe, challenges the concept of an ultra-high cost sports series. IPL pushes the premium performance envelope for buyers seeking a higher level of exclusivity and driving exhilaration, but does so with an Infiniti twist," said Poore. "The IPL G Convertible will deliver the goods, just like the current IPL G Coupe does. Plus, the new IPL G Convertible offers the added pleasure of open-air motoring."

The new IPL G Convertible is built on the same foundation as the Infiniti G37 Convertible, featuring a 3.7-liter V6 and power retractable hardtop designed to look just as good with the top up as it does down.

"Like every Infiniti, the new IPL G Convertible will take a different path from its established competitors," added Poore. "It's a terrific addition to the Infiniti Performance Line, taking the dramatic Infiniti G Convertible to an even higher level."

The production model of the 2013 IPL G Convertible will be revealed at the Los Angeles Auto Show in November.

Toyota's First EV Will Have a Name of BZ: Toyota BZ
First Videos From Inside The Boring Company's Las Vegas Loop
END_OF_DOCUMENT_TOKEN_TO_BE_REPLACED