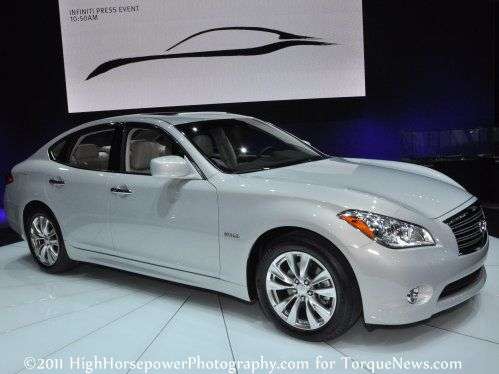 If you were watching March Madness on St. Patty’s Day yesterday, you may have noticed an ad or two for he new Infiniti M Hybrid. Though not the first Asian manufacturer to add green technology as a performance enhancement, one look at the M Hybrid and you’ll know this is not your father’s green car.
Advertisement

The ad campaign, which features the former frontman for Black Flag, Henry Rollins, providing the voice over for the commercial, is meant to dispel the Prius born impression that hybrid cars are boring to the performance enthusiast. That you can go green without your wrists falling limp.

It comes on the tails of the brand’s announcement earlier this month that sales were up 29.9 percent last month. In addition, sales on the popular G sedan rose by 50.6 percent while sales of the M line grew by 44.2 percent. Sales of the FX crossovers were also up by just over 20 percent.

"The Infiniti brand continues to outperform its luxury competition and gain share with a line of automobiles that are designed and engineered to inspire at every turn," said Ben Poore, vice president, Infiniti Americas. "This month, the latest expression of that mission, the Infiniti M Hybrid, goes on sale, allowing luxury sedan buyers to never again have to make the compromise between performance and fuel efficiency."

The 2012 Infiniti M hybrid will launch nationwide in spring 2011. The unprecedented new vehicle features the Infiniti Direct Response Hybrid™ system, which utilizes one-motor and two clutches in a parallel system. The Infiniti M Hybrid delivers a phenomenal 360 horsepower AND 32 miles to the gallon – brilliant!