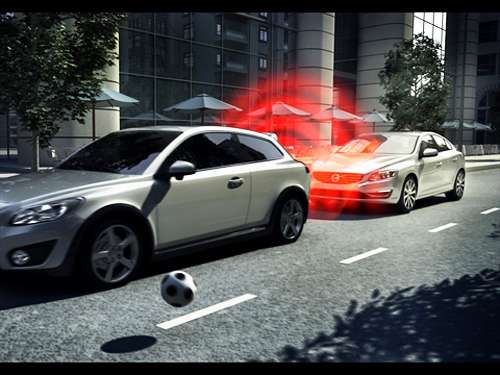 Despite the widely witnessed failure of the City Safe low-speed impact avoidance system in 2010, the technology really does work and the improved version now featured in the all-new 2014 Volvo S80 and XC70 will stop itself at speeds up to 31-mph to avoid an impact.
Advertisement

Not only that, but these models will read and display road signs in the instrument panel, theoretically even if an 18-wheeler blocks them from your view.

Let’s face it – the brand has been passed around like a redheaded stepchild ever since Ford bought the ailing manufacturer for $6.45 billion in 1999. After having their way with the brand, the American giant sold Volvo at a loss to China’s privately held Zhejiang Geely Holding Group for $1.8 billion.

Nevertheless, whatever the growing medium the Volvo tree is planted it, the brand’s intrinsic DNA will remain the same. Since buying Volvo, the vehicles built by the Geely Group in China have risen from a Zero safety rating to the first compact commuter in China to receive a five-star rating. That says something about what they have already learned from Volvo.

So when we say the 2014 Volvo S80 and XC70 have improved safety, it is implying Chinese ownership has not altered the true essence of the 85-year-old automaker. The Geely Group wants the brand to help them grow, something they can’t accomplish by changing what it has always been.

The new models and technology will be revealed at the upcoming Geneva Auto Show next month, marking the most extensive redevelopment of existing models in the automaker's history.

"The new features in the new Volvo S80 and XC70 are based on our human-centric approach, which has been a Volvo hallmark for more than 85 years. They take the elegant sophistication of our largest models to a new level," says Lex Kerssemakers, Senior Vice President, Product Strategy & Vehicle Line Management at Volvo Car Group.

"We pave the way for our future model line-up by bringing the models visually closer to each other. The renewal is one of the most extensive in our history, with the main focus on improved quality and attention to detail."

Enhancing the sophistication of the Volvo S80
New design cues give the exterior of the 2014 S80 sophisticated countenance. The bumpers at both ends serve to stretch the flagship’s image, making it look wider and lower. Newly added Daytime Running Lights up front bring the face up to date, while the rounded classic Volvo lights distinguish the sedan’s derriere. To add to the S80’s elegant appeal, 19-inch wheels are optional.

"The whole effect adds elegance to the car," explains Fedde Talsma, Design Director, Exterior. "We have created a wider proportion on the front grill and added more detail, such as chrome exterior highlights to give the car an elegant feel."

The Inscription trim level adds an extensive palette of upholstery options, giving the customer the chance to feel involved in the creation of Volvo's most luxurious offering.

"We are very proud of having Bridge of Weir in Scotland as a supplier of our quality leather seats. Their genuine cowhide has far less surface treatment than that in other premium cars, making it feel softer and more natural," says Lena Jiseborn, Design Director, Color and Trim. "The quality of the seats and other materials used in the car give the car a true Scandinavian feel," she continues.

How many cars can you specify from the very foundation? The S80 consumer gets to choose from two different chassis – Comfort and Lowered Sport.

The new Volvo XC70 – the S80’s rugged all-terrain sibling
Volvo Cars launched its entry into the SUV/crossover segment with the V70 Cross Country in 1997.

"Our main focus in the continuous development of the XC models has been to create a very comfortable on-road car with capable, off-road potential. The rugged and refined contemporary look reflects the XC70's underlying strength and capability," says Lex Kerssemakers.

The XC70 also features new off-road capability thanks to skid plates that protect the underside on uneven surfaces. The reinforced section below the belt line now surrounds the fog lights and the rear lights have also been redesigned.

The rear seats split and fold in three sections in a 40/20/40 breakdown. Folding the rear seats flat boosts cargo space from 20.3 to 56.5 cubic feet. Another handy feature comes in the power liftgate. The rear seats can easily accommodate double two-stage child seats, offering children from three up a safe, comfortable ride.

Sensus Connected Touch - a new level of automotive connectivity
Sensus is the name Volvo uses for it telematics functionality and the all-new Connected Touch version a state-of-the-art infrared, beam-scanned 7-inch touchscreen display functional even when wearing gloves – something you’ll appreciate if you ever tried using your smartphone with covered hands.

It enables connectivity and Internet in the car via a car-mounted 3G/4G dongle or the driver's phone, providing access to full Internet browsing when not driving, streamed music, web radio and HD radio with thousands of channels from all over the world, Google Maps and Search, Embedded 3D navigation with real-time traffic info and danger zone warnings, parking locator, weather updates, several native applications, an app store as well as a Volvo retailer locator.

New safety technology
IntelliSafe, Volvo's name for active safety systems, includes City Safety technology standard. This advanced safety system keeps an eye out for people in the car's path and now works with Pedestrian Detection to automatically brake at speeds of up to 31-mph whenever a pedestrian strays into the vehicle’s path.

"As the leader in automotive safety, we have reduced the risk of being involved in an accident or being injured in one of our latest car models by about 50 percent since the year 2000. By continuously introducing new preventive and protective systems, we keep moving toward our safety vision that nobody should die or suffer serious injuries in a new Volvo car by the year 2020," says Thomas Broberg, Senior Safety Advisor at Volvo Car Group.

You have to admit it is an admirable goal – let’s hope it is an achievable one.