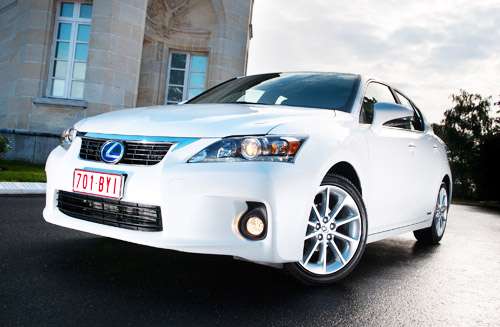 Vehicles of nearly every size were chosen by the Insurance Institute for Highway Safety’s (IIHS) TOP SAFETY PICKS for 2012. From the miniscule to the gargantuan, consumers have more choices than ever before among the safest vehicles on the road today.
Advertisement

In all, 69 cars, 38 SUVs, 5 minivans, and 3 pickups were selected as providing the best protection for drivers and passengers in front, side, rollover and rear-end crashes based on the Institute’s evaluations. Covering the most common kinds of impacts helps shoppers pick the vehicles offering the highest levels of safety available.

The winners’ circle includes 18 new recipients for 2012, while 97 models that had previously qualified for the 2011 award remain on the list for 2012.

Honda stands out for a commendable effort to get more of their lineup up to IIHS standards of safety.

That automakers have made a sincere commitment to protecting people in crashes is evidenced by the design improvements rapidly implemented during the past year. Originally, only 66 vehicles qualified for last year’s award as disappointing rollover ratings derailed a number of contenders. Another 34 made the grade as manufacturers created new and stronger roofs or introduced new models. The Institute’s rolling test schedule allows for recognition of additional winners throughout the year. Many selected 2012 models were a TOP SAFETY PICK in 2011 as well.

Though every major automaker has at least one model so designated, Subaru retains the distinction of being the only manufacturer winning awards for every model in its line.

Toyota along with its sister brands Lexus and Scion scored 15 winners for 2012, more than any other auto manufacturer. General Motors came in next with 14, followed by Volkswagen and Audi with 13, edging out Ford plus Lincoln and Honda along with Acura with 12 picks apiece.

“It’s great to see the Accord and Camry, 2 of the top-selling midsize cars in the U.S. market, join the TOP SAFETY PICK ranks this year,” Lund says. “The Accord previously won the 2009 award but has been missing from the list since then.”

With fuel efficiency and reduced emissions a priority, the winners’ circle contains many more green choices including Toyota’s all-new Prius v. with more cargo room than the original, bringing the number of hybrids winning the safety designation to 15. The plug-in electric Chevrolet Volt and Nissan Leaf, winners in 2011, return to earn this year’s award.

For those who need their vehicle to help them do their work, the Ford F-150, Honda Ridgeline, and Toyota Tundra are all good choices in the large pickup category.

So far, no small pickups have made the grade – at least none the Institute has tested qualified.

“When we launched TOP SAFETY PICK in 2005, consumers had 11 models to pick from. Six years later, finding a winner that fits most budgets and lifestyles is easy,” Lund said. “It’s a testament to the commitment automakers have made to going above and beyond minimum safety standards.”