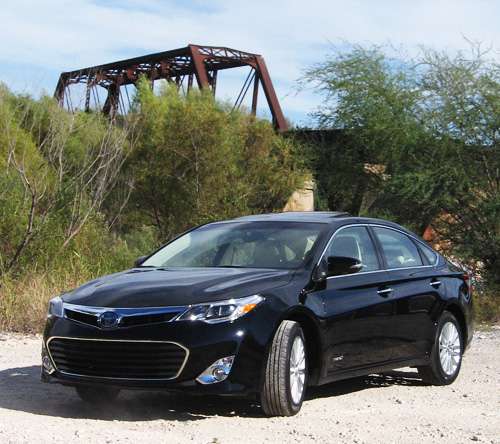 How the 2013 Toyota Avalon Hybrid outdoes the gasoline models

Now in its forth generation, the 2013 Toyota Avalon now for the first time offers a hybrid version, which takes full advantage of the revised Toyota Hybrid Synergy Drive to achieve a potential 39-40 mpg in both city and highway driving.
Advertisement

That is a remarkable level of efficiency for this spacious sedan, which will comfortably seat five adults for short urban jaunts or longer cross country outings.

“The point of the new Avalon is to show the market that ‘Toyota is Back!’ It will lead the charge for great styling, great handling performance, and the highest and best level of technologies” said Randy Stephens, Chief Engineer of Avalon.

Exterior
The Hybrid model takes even greater advantage of the exteriors aerodynamic enhancements. These include the front to rear tapering design of the body, flattened door handles with dimple scoops for access, carefully shaped and positioned sideview mirrors and refined airflow artifices on the undercarriage. Such efforts have combined to reduce the coefficient of drag to 0.28 – a level seldom exceeded by any vehicle.

The hybrid model is distinguishable from its purely combustion driven cousin by blue-trimmed Toyota emblems front and rear along with unique hybrid badges on the trunk lid, front doors and a hidden exhaust outlet.

Notably the rear seats provide bolster support for a more comfortable ride with available rear-seat heating. Between the outer seats a large rear console box is large enough to contain a box of facial tissue and includes a detachable sliding tray for smaller items. The sliding armrest lid can be moved up to 1.61 inches to function as an armrest, opening and closing in any position.

Ambient LED lighting gently illuminates the door controls, center device bin and cup holders, which can be dimmed or brightened at three different levels to suit.

Unlike the gasoline model, it has an electronically controlled continuously variable transmission with a final drive ration of 3.54 to 1.

It features the same steering, suspension and braking as the other 2013 Toyota Avalon models. Notably, the hybrid weighs in at just 124 lbs. heavier, 3,585 lbs, than the non-hybrid variants.

Safety Technology
Like the other Avalon models, the hybrid has an available two-millimeter wave radar system that enables a Blind Spot Monitor and Rear Cross Traffic Alert, provided to detect cross traffic behind the vehicle in parking spaces or residential driveways.

The Blind Spot Monitor will indentify vehicles larger than 125-cc motorcycles at speeds from 10 to 26.8 mph faster than the Avalon is proceeding. The system’s detection range extends from roughly 10 to 2 feet, based on the vehicle’s location.

The Avalon’s Rear Cross Traffic alert uses rear sensors to detect vehicles approaching from either side behind the vehicle. A buzzer sounds if a vehicle is detected approaching when the cars is in reverse.

The system will detect cars, trucks, vans and anything larger than a 125cc motorcycle, while Avalon is backing up a less than five mph and the vehicle approaching does not exceed 18 mph.

Driving the Avalon Hybrid
The Avalon Hybrid has an EV Mode, ECO Mode and SPORT Mode, indicated on the color gauge display. In EV Mode the battery can propel the vehicle using only the electric motor for a mile up to 20 miles per hour in ideal conditions.

In ECO Mode fuel-efficiency is prioritized via reduced throttle response and energy consumption by the HVAC system.

In Sport Mode, even the 2013 Toyota Avalon Hybrid possesses more of the sporting DNA that distinguishes it purely petrol-powered brethren. It creates a more gratifying driving experience with boosted throttle response and acceleration, along with a more direct steering connection via the EPS.

So most of the time, you can be your concerned, responsible self, carefully conserving fuel and keeping your contribution to global warming down. Doing so more than 80 percent of the time, should earn the reward of brief indulgence – letting the horns grow and you foot get heavy.

Then you can just as quickly return to the socially conscious, politically correct Hybrid owner, your friends are sure to perceive in you.

The final word
The 2013 Toyota Avalon Hybrid has many refined characteristics to recommend it. Start with its green cachet that extends to the green in your pocket. With 40-mpg the hybrid will leave more money in your pocket – money to spend on the kids, the family, your personal passions or favorite charities.

All the while, riding around in a prestigious, spacious, comfortable and tech savvy sedan, that’s only $1,750 to $2.360 more than the 30-mpg models.

Though Torque News is not here to steer you wrong, we think you should drive one yourself and see what the 2013 Toyota Avalon Hybrid says to you. It can only help you make a more informed choice.

The new hybrid models will arrive in Toyota dealerships December 7.

For more about the 2013 Toyota Avalon models.