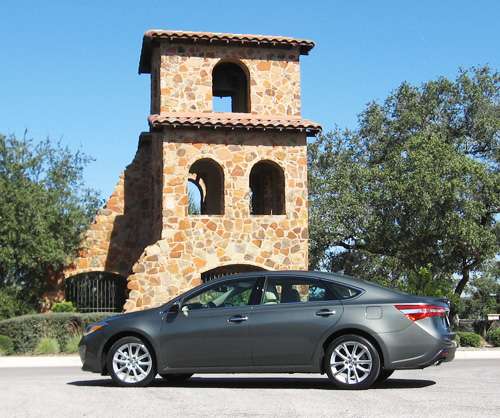 The all-new 2013 Toyota Avalon no longer an elder's sedan

With the refreshed 2013 Toyota Avalon, the brand is targeting a younger demographic with the first offering from the brand envisioned, designed, engineered and manufactured entirely by the American branches of the corporation.
Advertisement

The company is justifiably proud of the expertise shared among the 20,000 design and engineering professionals they employ at their design centers in Arizona, California, and Michigan. The all-new 2013 Toyota Avalon is their sole creation and marks a break from the tradition of all products being totally overseen by Japan.

The new model so embodies Akio Toyoda’s challenge to create exciting products that when the firm's charismatic leader was shown the final model his response was simply, “It looks cool, don’t change a thing!”

Exterior
The forth generation Avalon, as the flagship for the brand in the US, Canada, Puerto Rico and the Middle East, was first revealed at the New York Auto Show last April. It has attracted a lot of attention since then based primarily on its looks. The appearance of the new Avalon marks the direction for the brand’s new design philosophy with its aggressive yet sophisticated countenance, muscular stance, elegant profile and crisp, clean lines.

The hood sweeps downward from the windscreen to form flared nostrils between the LED headlamp eyes, over a wide, gaping mouth grille with horizontal louvers, dimpled by the parking and fog lamps on either side.

Gone is the bland innocuous look of past generations, replace with a look that seems to say, “Don’t tread on me!”

Depending on trim level, the 2013 Avalon sports either 17 or 18-inch alloy wheels that compliment the nine different exterior paint colors that come in mica, pearl or metallic, with four new shades never offered on this model before.

LED taillights are featured on all trim levels.

Interior
The 2013 Toyota Avalon is an open and roomy five-passenger vehicle with twin buckets replacing a bench seat and an unusual amount of legroom in the back seats.

The dash has been resigned for more efficient human interaction with a shorter, yet wider touchscreen display and an even more highly articulated steering wheel. The navigation screen is less than two inches below the level of the gauges behind the wheel, so an operator glancing at the screen need only adjust their angle of vision very slightly.

The interior surfaces are handcrafted and provide pleasing tactile contact. The materials come in a selection of ivory, light gray and black with tasteful wood accents.

An entirely new seat design has a thinner back, adding to the legroom in the back seat, while still containing the creature comforts of a 10-way power adjustable driver's seat, leather covered and heated even in the base model. The upper trim levels get heated and ventilated premium leather seats and a new rear seat heater in Limited models.

All models feature the Toyota pre-collision system, and a new blind spot monitor comes optional and includes a rear cross-traffic monitor as well.

A rear view camera and the Toyota STAR system are also included on all models.

Ten safety airbags are ready to deploy if needed. Dual-stage and knee units up front, along with outboard seat mounted bags for all four doors plus front and rear side curtains.

A Homelink garage opener has been integrated into the rearview mirror and Limited models also get the Safety Connect System providing 24/7 assistance from the third party Response Center. Those services include Automatic Collision Notification and Stolen Vehicle Location as well as Emergency Assistance when needed.

Driving the Avalon in Texas Hill Country
A press event in San Antonio last week provided the opportunity to drive the 2013 Toyota Avalon XLE in the Hill Country of south Texas. One prescribed route put the new sedan through its paces climbing the long ascents and descending into the valleys on sweeping curves as we negotiated the ridge known as the Devil’s Backbone.

Striking to the core of the next generation’s driving dynamics is the 70 additional spot welds that add a significant new level of rigidity to the chassis and frame. They also required the addition of six new robot arms to the assembly line in Georgetown, KY.

The wider track with a tread with over 62 inches confers an improved level of stability and agility to the big sedan, maximizing the effect of the new electric steering.

Shift paddles are available along with three drive modes in all trim levels for those who want to have them ready – for when that winding stretch of serpentine road extends beyond the horizon, the family’s safe at home, obligations are met and traffic is nonexistent.

The power output of the engine flows through a 6-Speed Toyota U660E tranny, that in sport mode provides quick shifting and dynamic rev management.

Rebound springs are used to improve roll rigidity and a larger, solid stabilizer bar has been added.

For the rear axle, the dual-link independent strut suspension has been revised to enhance stability while all new engineering geometry creates a high level of straight-line stability and agility. The shocks, springs and stabilizers echo the front suspension, but the No. 1 control arm uses a pillow ball joint to significantly boost performance.

In conclusion
There are a number of smaller improvements in the 2013 Toyota Avalon we’ve overlooked. Like the handy device bin with its automatic lid and the way the fuel lever has been replaced with a smart key function and a push open door that locks when the car does.

Remarkably, this roomy, comfortable five-passenger sedan with 268 horsepower gets better fuel economy than a VW Beetle at 21 mpg city and 31 mpg highway.

With all the improvements and enhancements, the new base model costs $2,205 less than last year’s model. The three trim levels of the XLE range from $30,900 to $35,500. The top of the line Limited, with a long list of premium appointments and technological features will still come in at less than $40,000.

When I first drove a 2006 Avalon years ago, my first thoughts were, “It’s an old man’s car – I probably won’t like it.” Nevertheless, after driving it to and from Albuquerque NM, taking the Interstate one way, and returning via the mountains of New Mexico and Colorado, I was simply amazed at how much I loved the car. It was roomy, comfortable, quiet and easy to drive. Beyond that, it demonstrated the spirited performance its outer appearance denied was there.

With a few minutes to kill before my flight back to Denver, I stopped at the lobby bar in the J W Marriott Country Resort and in talking with the bartender there discovered he had bought an Avalon new six years before. He had put over 100,000 miles on and still loves it without reservation. He was maybe a day or two over 40.

That’s just the kind of car it is. As my driving partner put it, “It’s the Buick GM wishes it could build.” That may be a left-handed compliment, but there’s a kernel of truth there if you look for it.

Watch for the next generation of the 2013 Toyota Avalon at dealerships next month.

Tigger wrote on November 14, 2012 - 3:33am Permalink
Very good, but overpriced and bloated rendition of the Hyundai Sonata. It took Toyota five years to develop this? Perhaps the design work should go back to Japan if the American designers are just copying hyundai. The 2013 Impala, Chrysler 300 and Ford Taurus are much better values and alternatives.
MsAvy wrote on December 11, 2012 - 4:27pm Permalink
@Tigger, if you don't own an Avalon then you wouldn't have any idea what you're talking about. Copy Hyundai is a joke!!! The Avalon is the BEST vehicle I've owned. I have a 2005 Limited model and still receive compliments. It drives like a dream. Highway driving is unmatched. I wouldn't own another Chrysler is you gave it to me! I don't know about the new design, but if this car drives anything like mine, I love it! Step back Tigger, the Avalon is obviously out of your league. My sister brought a Hyundai Sonata because she like the style of mine. Can't touch it. My 2205 still shines next to hers. Skip the alternatives, I'll keep my Avalon any day!!!