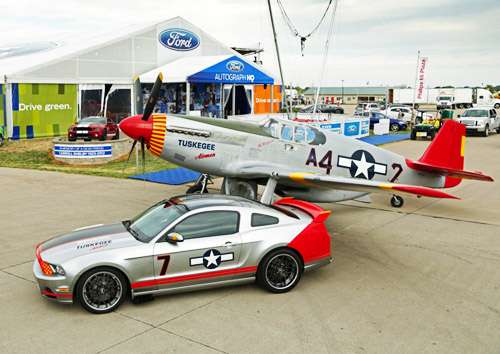 Recent efforts by the Ford engineering and design teams have resulted in the fabrication of a truly unique Tuskegee Airmen Red Tails model of a 2013 Ford Mustang GT, to be sold at the Gathering of Eagles charity July 26.
Advertisement

The tribute to the brave African Americans who formed the 99th Pursuit Squadron in their P-51 Mustang fighter planes will take place during the Experimental Aircraft Association (EAA) AirVenture Oshkosh 2012, billed as the World’s Greatest Aviation Celebration.

Proceeds from the auction of the donated car will benefit the EAA Young Eagles program, a provider of 1.6 million free introductory flights (so far) to young people since 1992, to inspire a new generation of leaders, aviators and innovators.

“The perseverance and excellence displayed by the Tuskegee Airmen are qualities we also celebrate at Ford,” said Edsel B. Ford II, a member of Ford’s board of directors. “With this year’s beautiful Red Tails edition Mustang, we’ve captured the recognizable symbols in honor of their important role in our history, and paired it with the innovation our Ford design and engineering teams build into all of our products.

“Through this project,” Ford added, “we take great pride in continuing our support for EAA and the Young Eagles organization.”

Pilot shortage
It could not come at a better time as the Associated Press announced a looming global shortage of pilots just over a week ago. As the profession has lost some of its glitz and glamour, fewer young people are pursuing a career in flight.

"In many regions of the world, a pilot shortage is already here," according to the Boeing forecast on which the AP based their story. "Asia Pacific in particular is experiencing delays and operational interruptions due to pilot scheduling constraints."

The Ford Red Tails Mustang GT celebrates and commemorates the WWII efforts of the Tuskegee Airmen, who made up the 332nd Fighter Group and the 477th Bombardment Group. The spirited squadron was the first US African American military air group. The Tuskegee Airmen flew over 1,500 combat in World War II, in their P-51 Mustangs with the tails painted red.

This one-only car is stamped with VIN 00051 in honor of the P-51 Mustang fighter planes the Red Tails flew. The 2013 Mustang GT 5.0-liter coupe has a glass-roof in a clear connection to the World War II fighters and a modern flair for the serious collector.

The exterior is stunning polished aluminum nonproduction finish paint just like the fighter planes. It is accented with Race Red and School Bus Yellow, complete with the P-51 fighter’s red tail plus all logos and markings of the United States Army Air Corps, 332nd Fighter Group and Squadrons – including TUSKEGEE Airmen proudly emblazoned across the hood.

On the inside, special details of the Red Tails Mustang include a modified navigation screen, instrument cluster and rear seat-delete. The car’s seats are Recaro covered with the Red Tails logo on the seat backs while the 332nd Fighter Group logo graces the floor mats

When the doors open Red Tails script is illuminated in the sill plates, while puddle lamps project a Red Tails image.

The Gathering of Eagles annually draws more than 1,000 aviation fans in support of Young Eagles and other EAA programs intended to inspire the young to become engineers, aviators, astronauts, scientists and innovators – the pioneers of tomorrow.

“Ford is a longtime, committed partner of EAA and AirVenture, bringing value to those who make Oshkosh the pinnacle of their aviation year,” said Rod Hightower, EAA president and CEO. “These specialty vehicles allow EAA to provide support to its valuable programs and dedicated members in helping us grow the next generation of aviators.

Previous Aviation themed models
Other vehicles Ford has produced for the EAA Young Eagles include the Mustang AV8R, with cues from the F-22 Raptor, which in 2008 introduced the glass-roof canopy and garnered a record auction amount of $500,000.

Last year, Ford’s contribution saluted the legendary Blue Angels, with a Mustang celebrating 100 years of United States naval aviation.
During this year’s event, Ford will reveal the latest advances in auto technology at the Ford Hangar, and many revered classics at the popular Cruisin’ Legends area on the grounds of Wittman Regional Airport.

The Ford Red Tails Mustang GT, the North American Aviation P-51 Mustang and the brave men of the Tuskegee Airmen Red Tails have finally found a revered place in the annals of US history.

It’s important we remember freedom isn’t free – it needs to be earned.

LG's New EV Battery Plant Is a Welcome News for Tesla
Tesla Giga Berlin's New Hurdle: It's Not Only the Gov't, but Now Tesla Itself
END_OF_DOCUMENT_TOKEN_TO_BE_REPLACED