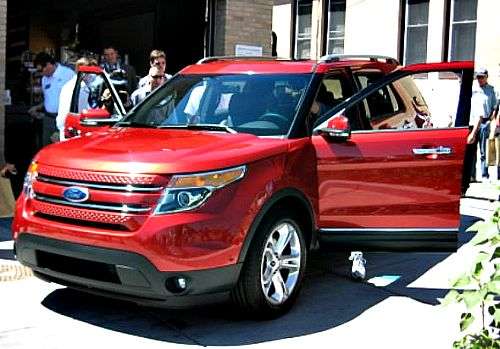 Ford’s MyKey technology will have a new feature added to SYNC so parents (who have enough to worry about when they hand their keys to a teenager) can block incoming phone calls and deter text messages while teens are behind the wheel. This will make the Do Not Disturb feature, available on all 2011 vehicles with SYNC and MyFord Touch, available as a parental control through MyKey when the new Explorer rolls out in early 2012.
Advertisement

The dangers of texting or operating other digital devices behind the wheel are known to be as deadly serious as driving drunk, Recent studies have revealed most accidents involving teen drivers occur in the first month or during their first year of unsupervised driving. The new Ford MyKey Do Not Disturb feature will let harried parents breathe just a little easier.

This new Ford MyKey Do Not Disturb blocks incoming phone calls or text messages from a Bluetooth mobile phone, routing calls into voicemail and saving text messages for later viewing. But unlike shutting off the phone, drivers can still make voice-activated outgoing phone calls and the SYNC 911 Assist feature can make an emergency call if needed.

"Adding Do Not Disturb to MyKey is yet another way Ford is helping parents to encourage their kids to drive safer," said Andy Sarkisian, Ford Safety Planning and Strategy manager. "We are continually listening to our customers and responding to parents' desire to make sure their kids are paying attention to the road, not their cell phone."

Can you remember how invincible 19 felt? You really believed you could do almost anything didn’t you?

The U.S. Department of Transportation has conducted large-scale, long-duration, driving research helping us to better understand driver distraction and its consequences. Multiple studies repeatedly find simply not looking where you’re going is the primary cause of most crash and near-crash incidents.

Ford was among the first to support a federal ban and state-level legislation banning hand-held texting while driving simply because you can’t text and operate a vehicle at the same time. The SYNC voice system reduces the risk of distractions, allowing drivers to keep their hands on the wheel and eyes on the road even when they decide they can safely do other things.

Novice teen drivers are on a steep learning curve, lacking the skill levels needed to control the vehicle, detect hazards and accurately assess situations. The MyKey Do Not Disturb feature is an option parents can use to set limits on their teen’s driving in order to engender a focus on safe driving skills and habits.

The MyKey system allows parents to program any key through the vehicle message center. Along with the added Do Not Disturb feature, MyKey features include limiting top speed, enforcing No seatbelts, No tunes muting the audio system until kids buckle up, blocking adult satellite radio programming, limiting stereo volume to 44 percent of maximum, disallowing traction control deactivation, enabling a chime alert at designated speeds and a low-fuel warning at 75 miles until empty.

"Our dealers tell us that when they have a buyer with kids in the house and they mention the MyKey feature, every single one of them says, 'How do I turn that on?' Customers are very happy with the feature," Sarkisian concluded.

kevinpmcw wrote on October 28, 2011 - 11:54am Permalink
SafeApp, LLC launched this technology on Android this year. It's called DO NOT DISTURB (Bluetooth) and only cost $4.99. No Ford required...
Frank Gibson wrote on October 28, 2011 - 12:46pm Permalink
Keeping teen driver’s safe is something we all feel strongly about. That’s why we developed MOTOsafety, a new service that helps parents monitor and coach their teenage drivers. We worked with members of law enforcement, driving instructors and accident investigators to develop this powerful tool. The service gives parents a daily report card showing how their teen performs on key safe driving habits such as speeding, harsh braking and rapid acceleration. We believe MOTOsafety gives parents a great way to increase the safety of their teen drivers.
hid conversion kit wrote on November 4, 2011 - 4:08am Permalink
Thanks for taking the time to discuss about this, I feel strongly about it and love learning more on this topic. If possible, would you mind updating your blog with more information? It is extremely helpful for me.

Toyota's First EV Will Have a Name of BZ: Toyota BZ
First Videos From Inside The Boring Company's Las Vegas Loop
END_OF_DOCUMENT_TOKEN_TO_BE_REPLACED