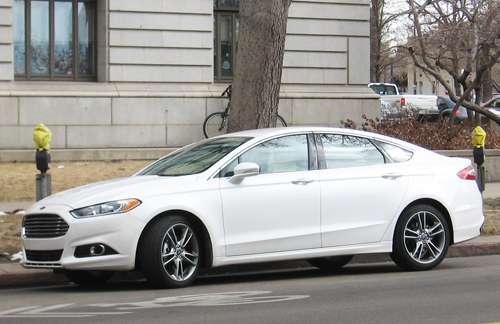 For the first time ever, Ford hybrid sales have exceeded 20,000 units in a fiscal quarter this year, lead by the Fusion and C-Max models that are impacting the demographic of those less than 36 years of age.
Advertisement

In large US key markets, such as New York, Los Angeles and San Francisco, Fusion Hybrid sales have skyrocketed by 518, 478 and 325 percent respectively, in the first quarter of 2013.

According to the brand, many buyers cite design and technology as the prime reasons for their purchase, above and beyond the exceptional economy of a hybrid vehicle.

Notably, the last three months marked the first quarter Ford had four new hybrid and plug-in hybrid vehicles on the market, including the Fusion Hybrid, Fusion Energi, C-MAX Hybrid and C-MAX Energi, even though Ford’s first hybrids went on sale in October of 2004, nearly a full decade ago.

Also encouraging the brand, three fourths of the customers in key hybrid markets previously owned other brands, and were drawn to Ford by the new models. These young savvy buyers are not only investing in hybrid and plug-in vehicles, the are seeing they have the latest and most up to date technology available.

Strongest impact on the West Coast
A full 25 percent of all the electrified vehicles sold in the US last year were in California – far more than any other state and likely because of the state’s leadership towards sustainable energy. Ford seem to be capturing the loyalty of these concerned citizens as 73 percent of the 2013 Ford Fusion’s customers in Los Angeles have never owned a Ford before. In the San Francisco area, 77 percent of Fusion Hybrid customers are converts from another brand.

Eddie Sasaki, of Los Angeles, replaced his Jeep Wrangler with a Fusion Hybrid four months ago. First he looked into the Chevrolet Volt and Kia Optima Hybrid, but said “I love the look of the Fusion. Fusion’s overall appearance and value are what sold me.” He’s getting about 42 mpg on his 40-mile daily commute so far.

Remarkably the Fusion and C-MAX hybrids are taking most of their business from former Toyota owners. Initial sales data shows over 60 percent of C-MAX Hybrid and C-MAX Energi buyer are new to Ford, since the vehicles became available in 2012.

According to Edmunds.com, Ford’s all-new Fusion Hybrid is already getting more purchase attention than the Toyota Camry Hybrid, long one of the best selling hybrids and sedans in the nation.

At the same time, Fusion hybrids are attracting the youngest wave of customers in the midsize segment, with over 20 percent of Fusion Hybrid and Fusion Energi buyer less than 36 years of age.

Remarkably, Ford’s electric vehicles are making inroads where buyers have traditionally shied away from such, including Texas, Florida and the central states. One-third of all C-MAX sales are in the Midwest, where hybrid sales have historically been paltry.

Hybrid buyers want technology
Industry analytics from J.D. Power indicate design and technology are among the top reasons customers are choosing Fusion Hybrid over the competition. Fusion’s design gets their attention while technology reals them in. Systems like SmartGauge with EcoGuide, the Lane-Keeping System, Driver Alert, Blind Spot Information System and SYNC with MyFord Touch are helping sales.

Buyers of new hybrids are tech savvy
Hybrid buyers opt for the MyTouch package 70 percent of the time while only half of gasoline model want the technology package. Blind spot and lane-keeping systems are included on 31 percent of hybrids, double the number for the standard variant. Another 12 percent of hybrid buyers select active park assist, compared to 7 percent for the conventional Fusion.

C-MAX Hybrid owners spend their gas savings on tech too
It seems C-MAX Hybrid move out three times faster than those without the extras. They also tend to like fresh air as 27 percent opt for the panoramic fixed-glass roof and over 75 percent select the hands-free liftgate option.

Ford’s move into electrified vehicles
Ford’s most fuel-efficient sedan, the Fusion Energi is EPA-rated for up to 620 miles total range and boasts 21 miles of pure electric power, nearly triple the electric-only range of plug-in hybrids from Toyota and Honda. It also gets an EPA-rated fuel economy of 108 MPGe city, 92 MPGe highway and 100 MPGe combined. Not bad for their first venture into the plug-in arena.

The Ford Fusion Hybrid claims the crown as America’s most fuel-efficient midsize hybrid sedan with an EPA-estimated rating of 47-mpg city, highway and combined.

Is the C-Max hybrid the right car for you? See what we thought after 600 miles here.