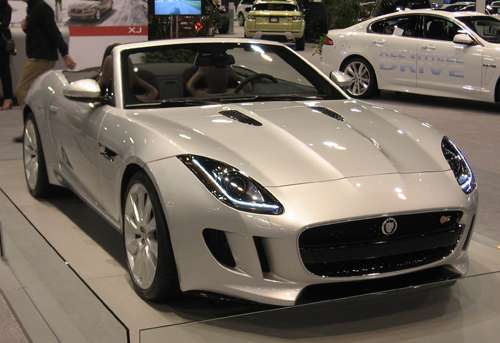 The all-new Jaguar F-type sports car will begin to arrive at dealerships one week from today and over 50,000 potential buyers and 20,000 Facebook fans agree this event could not happen at a better time than one month before the Summer Solstice of 2013.
Advertisement

Jaguar has announced an aggressive advertising campaign to publicize what they call, “the first official sports car that the brand has offered in over 50 years.”

"We have built on Jaguar's sports car heritage which stretches over 75 years, and in the F-TYPE we have reignited the flame," said Adrian Hallmark, Global Brand Director of Jaguar. "The Jaguar F-TYPE sports car – not designed to be like anyone else's sports car – is ultra-precise, powerful, sensual and most of all it feels alive. The campaign perfectly embodies all Jaguar's values."

We personally drove a 1971 Jaguar E-Type when it was new, but it was not a true two-seater, even though the rear seats were something of an afterthought. Still the purest definition of a sports car is a two-seat roadster and that is what Jaguar means when it refers to the Jaguar F-Type sports car.

Jack TerHar, President of Sill-TerHar Motors in Broomfield, CO, told us he first knew of this new model when in 2004 he when to England for a test drive of the new Jaguar XK.

He was talking with a designing engineer from Jaguar at a local pub that evening and the Briton described his vision of the F-Type convertible and drew a quick outline on a napkin.

He remembers the night clearly because he and engineer to “totally pissed” and ended up driving through a English field after falling asleep at the wheel at 2 am, in the attempt to return to his accommodations.

TerHar pointed out it is three quarters of an inch longer than a Porsche 911 with a wheelbase 6.7 inches greater, resulting in a nearly perfect 50/50 front-to-rear weight balance.

The 340 hp supercharged base model will accelerate from zero to 60 in 5.1 seconds. Remarkably this is a 4-cylinder supercharged model. The 380 hp V6 F-Type S can reach that speed in 4.8 seconds and the full-blown 2014 Jaguar F-Type V8 S model will cut the time to 4.2 seconds.

Not suprisingly the vehicle has taken advantage of carbon fiber to cut weight while boosting displacement in an engine 25 percent lighter.
“Its performance from 60 to 120 is startling,” added TerHar. “It’s a thrill to drive on the track – I was amazed.”

The new Jaguar F-Type convertible features a spoiler that rises out of the rear deck at 40 mpg. It comes with available Damper Suspension and a Dynamic Mode that alters suspension, throttle and shifting to more aggressive points.

Dennis Lassiter of Jaguar was also on hand and noted how he much he appreciated the OSH grips. You know – the things you grab when your mind races and is filled with the need to hang onto something - “Oh S--t Handles,” are what you grab onto in those moments.

The vehicle has a transmission specifically designed for it by Zeta, and even though it is a dedicated rear-wheel-drive vehicle, it is available in an all-wheel-drive model that will shift up to 30 percent of the torque to the front wheels. The base model has an MSRP of a highly attractive $69,900.

Keep tuned in to Torque News as Jack TerHar promised us a chance to drive the Jaguar F-Type sports car when models arrive next week and he is, if anything, a man of unquestionable integrity.

If open-air driving doesn't appeal to you, the fact a Jaguar F-Type Coupe is coming should. Lassiter stated the brand will introduced a new model every six months for the foreseeable future, so there's plenty of Jaguar excitement still to come.