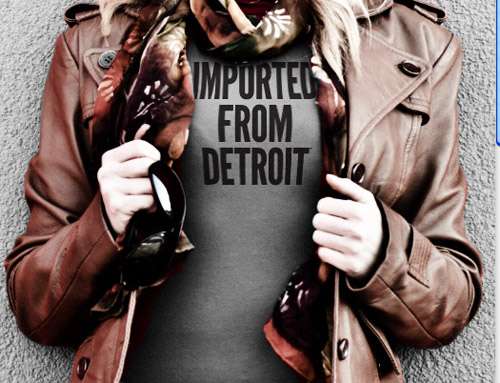 Chrysler trots out all new Imported from Detroit merchandise

"The Imported from Detroit theme continues to generate a conversation throughout this country and we are proud to share that message through this new collection of clothing and accessories," said Saad Chehab, president and CEO for the Chrysler Brand. "Keeping in the spirit of the campaign, we will continue to donate a portion of our proceeds to four local charities so that they can continue to develop programs and initiatives that contribute to the youth of Detroit and the surrounding communities."

The new collection features a wide variety of items including decals, posters, clothing, outerwear, hats, tote and messenger bags, as well as an array of items for kids. The least expensive item is the decal at $5, but men’s T-shirts are $29, with women’s T’s the same or a little more. Totes and backpacks range from $20 to $160.

All products are U.S. made and feature the new Imported from Detroit logo or graphics as well as some with the original bolt in fist design. Prices stated do include shipping and handling.

A unnamed portion of the proceeds from sales of the Imported from Detroit goods will go to four area nonprofits to continue the regeneration of the city hit so hard by the economic downturn of 2008.

The first of these is Eminem’s Marshall Mathers Foundation that works to rescue low-income and at-risk youth in the city of Detroit.

The Southeastern Michigan Boys and Girls Club is a youth enrichment organization serving 23,000 youths annually at 12 different sites in Wayne, Oakland, Macomb and Washtenaw counties, where kids from six to 18 can go after school five days a week.

The Detroit affiliate of Habitat for Humanity, the international Christian charity that seeks to empower the disadvantaged by providing safe and affordable housing to low-income families will to invest their time and labor in the construction of their home. The organization has either rehabilitated or built new houses for more than 300 families in Detroit since 1986.

Think Detroit PAL was founded in 2006 by the combination of Think Detroit Inc. and the Detroit Police Athletic League. The partnership between the Detroit Police Department and community volunteers helps builds character in the young via athletic, academic and leadership programs, serving 10,000 kids in 24 sports and academic programs. It is one of the largest youth organizations in Michigan, with 80¢ of every dollar going directly into the programs for youth.

To get your Imported from Detroit goodies visit the IFDstore.com.