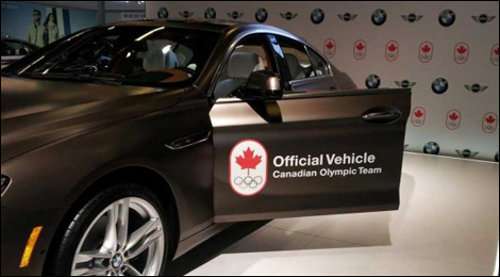 The agreement was announced today by the BMW Group Canada, based on the assertion that and a company focused on performance and innovation makes a perfect partner for the Canadian Olympic Team, who strive for peak performance in every sport they compete in.

The partnership was revealed at high-revving events in Montreal and Toronto, in the presence of Winter and Summer athletes, giving the Canadian athletes fuel-injected funding for their performance and coaches that will continue through the next two Olympic Games in Sochi during 2014 and Rio in 2016.

“The BMW Group, a company focused on performance and innovation, is the perfect partner for the Canadian Olympic Team, whose athletes strive for peak performance in every competition,” said Eduardo Villaverde, president and CEO, BMW Group Canada

“Our two organizations share many of the same beliefs and values, and we believe working together will bring tremendous benefits to both of our teams,” added Villaverde Over the next four years, we look forward to creating innovative programs that provide substantial financial support to Canadian athletes. Our retailers look forward to this as well – they will be a major force in our overall contributions and programming. At the same time, we know that our associates and customers will be mightily engaged in this partnership, as well.”

Canadian Olympic Athletes, on hand for the sponsorship announcement were thrilled to the have the brand’s support for their competitive efforts.

“It’s very cool to be here and there’s a lot of pride in being associated with a high-quality brand like BMW,” added Roseline Filion, London 2012 Bronze Medallist in Diving. “It’s also a tremendous feeling to know that, once again, we’re seeing increased support for the amazing work athletes and coaches are doing 365 days a year. It’s a pretty exciting time to be a Canadian Olympic athlete.”

“More support for athletes and coaches is always great, especially when it comes from such a high-performance company like BMW,” echoes Antoine Valois-Fortier, London 2012 Bronze Medallist in Judo.

“It really helps us athletes to know that we’ve got such amazing support behind us for the next four years. It lets us concentrate on improving every aspect of our game as we head toward Rio and beyond.”