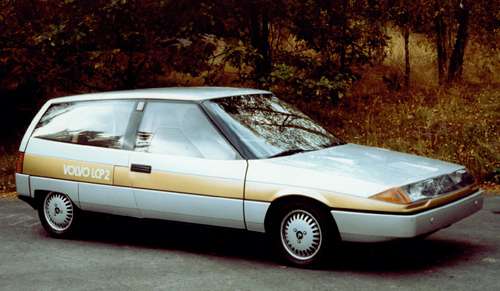 When Volvo began its Light Component Project in 1979, fuel efficiency and alternative fuels were not the watchwords of the day.
Advertisement

At that time, power and performance were all that really mattered to auto buyers, but somehow the visionaries at Volvo foresaw the dawn of a new day in the distant future. The firm envisioned a focus on sustainability replacing conspicuous consumption in the cars we drive ¬and set out to create a new kind of automobile.

The goal was to design a functional vehicle out of lightweight materials, and produce prototypes of highly efficient vehicles retaining the brand’s safety level. The target date for the realization of production models based on the project was the year 2000, thus the name given the prototype was the LCP 2000.

Rolf Mellde, who had been director of the electric car study, took the lead on the project. Under his leadership, the Volvo team developed four different vehicles using the various new materials and technologies under development at the time.

The first showing of the two-door variation of the iconic Volvo box wagon shaped vehicle came in 1983, at an early environmental symposium in Stockholm. A rear seat facing backwards was entered through the plastic liftgate – a least one model of Mercedes and the Tesla Model S are configured that way today – though rear gates are not primarily made of plastic.

The cargo area was between the front and rear seats and remarkably the LCP 2000 looks a bit like the Volvo 480, released in 1986.
Design guidelines required the prototypes to get nearly 60-mpg and weigh in at no more than 1,540 pounds.

Placed transversely in the engine compartment, two different manufacturing technologies were used to produce the prototype’s engines. One was a lightweight magnesium 1.3-liter engine developing 50 horsepower.

The second was a 1.4-liter cast iron diesel producing 90 hp. The engine used oil to cool itself, with no cooling jacket in the cylinder head. Remarkably, it could run on any oil, including rapeseed (similar to Canola), which apparently created the aroma of Fish & Chips as it passed by.

The prototypes were all front wheel drive and featured either a manual five-speed transmission or an electronically controlled CVT.

Extensive use of magnesium, aluminum and plastic enabled the vehicles to meet the weight goals. The materials were picked not only for their weight, but also for longterm availability and recycling capability, in the interest of sustainable production.

For some reason no one was looking for a more environmentally friendly car in 1983, but the efforts of this project, along with following studies of the LCP 2000’s lifecycle – from raw materials to production, consumer lifespan and scrapping – helped formed Volvo Cars' environmental strategy.

Subsequent, the brand issued their environmental declaration on new cars, known as the EPI, in 1998.

Today the LCP 2000 is in the Volvo Museum, but many of the concepts it brought to the fore are very much a part of the automotive world of 2013. Certainly, the lessons learned in the Light Component Project are used in everything the firm builds today.

Let’s raise a toast to a true pioneer of the automotive world of today - The LCP 2000.