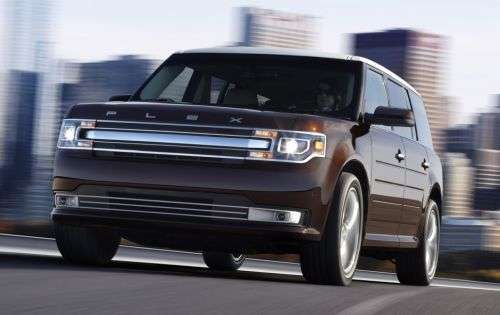 When the 2013 Ford Flex is revealed at the Los Angeles Auto Show,10 days from now, it will be following on the heels of the model’s best year-to-year sales to date. In an effort to capitalize on that popularity, the seven-seat vehicle will feature an updated new front end, fresh new interior appointments, 20 hp more power and a 1-mpg improvement in efficiency.
Advertisement

Mark Fields, Ford president of The Americas, said the Flex is one of the fastest growing SUV’s in sales for 2010, experiencing an 48 percent conversion rate of formers buyers of competing brands. He also stated 18 percent of Flex buyers are choosing the new EcoBoost engine.

“Flex appeals to people who want to stand out from the crowd and has the highest retention rate of any vehicle in the Ford lineup,” said Mark Fields “With technologies not found in other full-size utilities, even better fuel economy and a more modern, sophisticated look, we’re offering people even more reasons to choose Flex with the new model.”

The 2013 Ford Flex will feature SYNC standard with the new MyFord Touch, sporting an improved display, making the control of climate, navigation, entertainment and other features easier and more responsive.

“We’ve listened to our customers and have improved what they love about MyFord Touch,” said Kenneth Williams, systems integration engineer. “In this upgrade, the screens have a cleaner, clearer display. The words on the screens are larger and easier to read, the pressable areas on the screen look more like buttons, and we have made the functions clearer for faster navigation.

“What separates MyFord Touch is that there are multiple ways for customers to manage and control what they want through voice commands, menus accessed through the steering wheel controls, touch screen, buttons or knobs – whatever they prefer.”

MyFord Touch includes two 4.2-inch screens in the instrument cluster and an eight-inch screen in the center stack. The base SYNC package includes hands-free, voice-activated calling via Bluetooth or USB connected device, 911 Assist free for the life of the vehicle, and an on-demand diagnostic/maintenance information feature.

The system helps reduce head, neck and chest injuries for rear seat passengers, frequently children and older passengers more at risk for such injuries. Ford and their suppliers have developed inflatable seat belts that deploy over an occupant’s torso and shoulder in just 40 milliseconds during a crash.
The new Flex also boasts available radar-enabled adaptive cruise control (ACC) and collision warning with brake support and Blind Spot Information System (BLIS) with cross-traffic alert. These features help drivers avoid accidents using radar to detect the position of other vehicles and warn the driver with a both visual and audio alerts.

The ACC uses advanced radar to scan for other vehicles 20 times per second. The sensor detects vehicles up to 150 yards away as well as speed changes as small as 0.25 mph. When activated, the system functions like normal cruise control except when slowing in response to slowing traffic. When the road has cleared, the vehicle resumes speed. Four different distance settings allow customization to your style or road conditions by setting distance, speed and the gap between vehicles.

The popular 3.5-liter EcoBoost V6 remains is still available, providing the fuel economy of a V6 engine with all-wheel-drive and V8-like performance of 355 horsepower and 350 lb.-ft. of torque.

EcoBoost engines are part and parcel of Ford’s strategy to providing technologically advanced, high-output, smaller-displacement powertrains delivering improved fuel economy without compromising performance to the world. By 2013, more than 90 percent of Ford’s North American lineup will have with EcoBoost technology available. Ford holds over 125 patents on its EcoBoost engine technology.

Both engines come with a six-speed SelectShift Automatic transmission. When SelectShiftis paired with EcoBoost, paddle shifters are integrated into the steering wheel spokes. SelectShift won’t second-guess the driver – manual control is truly manual. The thumb shift is new for 2013 with the standard engine models.

The 2013 Ford Flex uses EPAS (electric power-assisted steering) to improve fuel efficiency by 4 percent, also reducing emissions while improving steering because the system is powered by an electric motor instead of engine-mounted hydraulic pump systems.

A few exterior touches tell the story of the 2013 Ford Flex – notably the familiar blue oval brand badge has been replaced with the FLEX emblem in the front grill. But for a closer look, you have to wait for the Los Angeles Auto Show when it kicks off next week.

yannieB wrote on November 9, 2011 - 4:12am Permalink
Ford's cutting-edge touch-screen infotainment encounter MyFord Touch will obtain an upgrade by early next year, reports the Detroit Free Press. Sources suggest that grievances that the old system was not fast enough and cluttered prompted the update. Current owners of a MyFord Touch-equipped Ford automobile will be able to update totally free. <a title="MyFord Touch upgrades to appear in 2013 models" href="http://www.cardealexpert.com/news-information/auto-news/myford-touch-upgrades-2013/">MyFord Touch upgrades to appear in 2013 models</a>. It's getting better all the time. The upcoming version of MyFord Touch will appear in the 2013 Ford Taurus, Flex and Escape. Owners will be sent a USB stick with any software upgrades. Self-installation is possible, but the less technically inclined will have the option of going to a Ford dealership for a free installation.
yannieB wrote on November 9, 2011 - 4:23am Permalink
Ford introduced touch-screen systems in the 2010 Ford Edge and 2010 Lincoln MKX. Since then, improved versions of MyFord Touch have appeared in the Explorer and Focus. In addition, the new MyFord Touch will respond to a wider array of voice commands. It will also work with Sirius satellite radio’s Game Finder feature so that drivers can speak the name of the broadcast sporting event to which they’d like to listen.