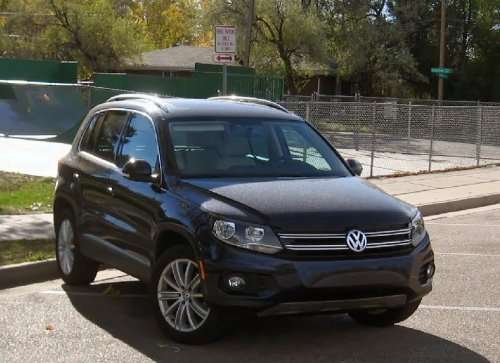 The 2012 VW Tiguan SE is a fun, versatile, compact runabout

Still in its first generation, the 2012 VW Tiguan was adopted by Volkswagen from Auto 5000 and is still working on its first million in global sales.
Advertisement

Nevertheless, it is a right-sized, economical and versatile compact SUV with sleek styling, plus smart ergonomics and engineering throughout.

Exterior
Two double ribbons of chrome cross the grille between the headlamps, dissected by the circular VW logo. With the black air intake below and over the receding front fascia, the 2012 Volkswagen Tiguan presents the countenance of a woodland predator – ready to chase and catch up to its prey.

It is 174.3 inches nose-to-tail, 71.2 inches from side to side and stands 66.3 inches tall over the street, making it just big enough without making it hard to park or keep fed. It shares the PQ35 platform with the VW Golf and, according to the manufacturer, “This highly capable compact SUV has the soul of a GTI.”

The fender lines continue to the rear gate and the rocker panels between the tires feature a chrome line that ties the style together. Slight bulges circle the wheel wells.

The roofline of the glass top is augmented by chrome roof rails in a gentle arc that echoes the distinctive ring of chrome around the side windows.

The model we drove sported Night Blue Metallic paint that comes at no extra charge, and 18-inch alloy wheels to complete the look.

Furthermore, though the roof rails may look decorative they are functional as well. They readily accommodate accessories enabling the Tiguan to carry bikes, kayaks, skis, snowboards or surfboards, and an available towing hitch can haul up to four bikes, or be used to pull 2200 pounds worth of jet skis, dirt bikes or ATVs.

Interior
The 2012 VW Tiguan is distinguished from other compact SUVs by spacious seating for five adults, easy ingress through doors that open very wide, and a generous amount of both leg and headroom.

Surprising versatility, however, is one of the vehicle's hallmarks. Thoroughly enabling the active lifestyle, the rear seats feature a 40/20/40 split. This allows storage of long objects down the wide center section, accommodating skis, fishing gear, or even rugs, while still providing space for passengers on both sides.

Even with the back seats up, there’s 23.8 cubic feet of space in the cargo area. Folding the rear seats creates 56.1 cubic feet and the front passenger seat also folds down allowing the transportation of objects up to 98 inches long. Rear seats also slide forward six inches, increasing cargo space in the rear, and when on road trips each rear seatback’s tilt can be adjusted.

In the cargo area, five tie-down hooks are provided to keep stuff in place and a 12-volt outlet is handy to power coolers or air pumps.

From the driver’s point of view, there is little that’s utilitarian about the 2012 Tiguan. The soft touch areas feature rich, soft touch plastics on the dash, plus brushed-metal trim surrounding the eight omni-directional air vents and gearshift.

The 2012 VW Tiguan SE features Volkswagen’s perforated V-Tex leatherette, available in black or beige; and the Tiguan SEL offers rich leather seating surfaces in black or beige. The model driven had the black and beige interior that perfectly compliments the deep blue exterior.

A full length panoramic glass tilt or slide sunroof lets the sun shine into the Tiguan’s cabin, with a power shade screen that keeps it from becoming too hot or intense. As quiet as a full metal roof, the panoramic roof is comprised of a front segment that opens and one static glass panel over the rear seats. The sunroof comes standard with the 2.0T S with Sunroof model, the SE with Sunroof and Navigation, and as part of the long list of standard equipment on the Tiguan SEL model.

We especially appreciated the angle of the plastic molded door handle over the door’s storage space and bottle holder. It is angled at roughly 40 degrees, matching the natural orientation of the driver or passenger’s hand as they reach to close it.

We also like the placement of both door latches and power window controls high at the top edge of the doors. Incidentally, the windows were very easy to control with none of the recurring up and down inputs to stop the pane just where it’s wanted.

The gauges are oversized and light up at night with a friendly blue and orange that can be read at a glance. Between them is a multi-function trip computer, right over the steering column allowing selectable data to be handily displayed.

One impressive feature is a compass displaying your geographic orientation in this display between the gauges. It can also be used both to display and control things such as fuel consumption, phone info and service intervals, among other things.

Safety Technology
The 2012 VW Tiguan SE features an entire suite of active and passive safety systems that warranted designation as an Insurance Institute for Highway Safety Top Safety Pick in 2012.

Travelers in front are protected by front and side-thorax airbags, while Side Curtain Protection cushions are there for all occupants. Safety belts are automatically pre-tensioned and cinched tight for front-seat and rear-outboard occupants in a collision.

All Tiguan models feature the Volkswagen's Intelligent Crash Response System that shuts off the fuel pump, unlocks the doors and even switches on hazard warning lights automatically if the vehicle is involved in certain kinds of collisions.

Another excellent feature helping to promote peace of mind is the no-charge Carefree Maintenance Program for all VW vehicles. All scheduled maintenance is covered by the Manufacturer for three years or 36,000 miles, whichever comes first.

As in the GTI, the 2.0T is mated to a precise-shifting six-speed manual transmission, with Tiptronic manual shifting, Sport mode, and Dynamic Shift Program.

The six-speed automatic transmission takes advantage of a second overdrive gear to reduce engine revs at cruising speeds. The transmission in non-Sport mode shifts at slightly lower revs, making greater use of the turbo engine’s considerable torque. For economy, the idle speed of the 2.0T engine has been lowered to 600 rpm.

Volkswagen’s sure-footed 4Motion all-wheel-drive system is offered on all models with the six-speed automatic transmission. The electro-hydraulic system delivers drive to all four wheels without any input from the driver. A Haldex center differential continuously varies the inputs to front and rear axles, depending on the traction available.

What this means is that most of the time 90 percent of the power goes to the front wheels, saving fuel, but when accelerating hard from a standstill, front-wheel slip is prevented by the Haldex’s ability to direct up to almost 100 percent of the torque to the rear wheels.

What all this means is the 2012 VW Tiguan SE is a master of highway curves in almost any conditions. The 4Motion system will overcome that rough road to the cross-country trailhead or an icy driveway in winter, not to mention optimal straight-line stability even in crosswinds.

We found the compact SUV to be a comfortable way to traverse city thoroughfares and side streets, and an eager performer on the freeway at higher speeds.

The electronic steering is very responsive, while the ride is comfy and the surrounding clearly visible. The 2012 VW Tiguan is an excellent choice for young active singles or couples in the wintery north and mountainous or rainy west.

If you are considering a compact SUV and looking at any of the following, the Tiguan is well worth a look.