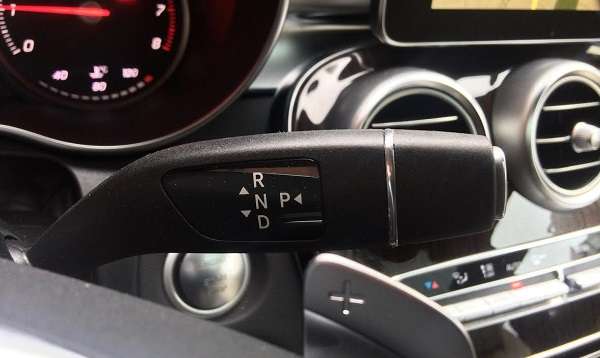 Recently, Consumer Reports released a report that detailed how confusing shifters have gotten on cars with automatic transmissions. It called out more than a dozen manufacturers for using shift levers it claims are difficult to use, even going to far as to stop recommending the Chrysler 300, the Lexus CT200h, and both the Mercedes-Benz E-Class and GLE. But while the report makes several good points, I can’t agree with it entirely. Because Mercedes’ column shifter is actually awesome.
Advertisement

The first time I ever saw the new shifter was in the C450 AMG sedan (now the Mercedes-AMG C43). As is the case with most press loans, nobody gave me an introduction to the car or explained how anything worked. And yet, somehow, I managed to figure out where the shifter was and how it worked in less than a minute. It wasn’t confusing at all. In fact, it ended up being brilliant.

I put a ton of miles on that car, and the more I drove it, the more I fell in love with the simplicity of the design. With my hands on the wheel, putting the car in drive required only a firm nudge of the stalk. No whole-arm movement needed. And as it turned out, not having to take my hand off the wheel to put the car in reverse made three-point turns a breeze. They’re not exactly difficult in cars with conventional shift levers, but after a few days of using a column shifter, all those extra arm movements started to feel unnecessary.

With the shifter no longer taking up space, Mercedes’ designers were able to simplify the design of its center consoles. Across the line, Mercedes offers some of the nicest interiors in the industry, and that’s partly because it doesn’t have to dedicate console space to a big, unnecessary shifter.

Yes, it’s a little weird to use such a small stalk to put a serious performance car like the C450’s big brother, C63 S, into gear. But you’ll still have plenty of fun behind the wheel of a 503-horsepower sports sedan, even if you don’t get the pleasure of grabbing a big, meaty knob and hearing it clunk into gear.

Really, we should be asking why traditional PRNDL shifters are still around at all. It’s not like putting a car in drive physically does anything. It just tells a computer to tell the transmission what to do. It’s what people are used to, but we can’t assume something is right simply because it’s been around for a long time. Technology moves forward, and so should the controls in cars.

Not too long ago, we were having the same issue with what the best way to manually shift an automatic was. Some companies put buttons on the shifter, while others let you slide the lever over so you could bump it up and down. But pretty quickly, we all realized that paddle shifters were a far superior solution.

If you’re driving down a long, steep hill, you might find those other methods useful for saving your brakes. But if you’re driving a performance car, having to shift that way can be downright frustrating. You don’t really get any of the benefits a manual would provide, and unless your transmission is incredibly sluggish, you’re probably better off letting the computer control the shifting.

Paddle shifters, meanwhile, won out for exactly the same reason a column shifter is awesome: you can keep your hands on the wheel the whole time. At this point, I can’t even imagine an automaker trying to sell the automatic version of a performance car without them.

Would it be great if Mercedes would program its shifter to put the car in park if you turn it off with it still in drive? Sure. But I’ve also never had an issue remembering how to park a new Mercedes. Maybe it’s an issue for people who haven’t also spend years driving cars with manual transmissions, but come on. It’s not that hard to make sure your car is parked properly.

Having driven pretty much every new car out there, I firmly believe the Mercedes column shifter is as good as shifter designs get. Rotary knobs are fine, but they’re finicky and can’t be used eyes-free. Traditional shifters take up too much space and rarely look nice. And let’s not even talk about whatever the one in the Toyota Prius is.

Honestly, I’d love to see more automakers take a page out of Mercedes’ book and start using column shifters of their own again. If they could become standard just like paddles are, that would be even better. Because if you can’t have a manual transmission, the next-best thing is a column shifter.

Parks McCants wrote on March 27, 2017 - 11:07pm Permalink
Collin Woodard... Seriously? Welcome to our world of self-edited auto news journalism. A decent read. See you around the virtual office cooler. Cheers!
Kit Gerhart wrote on January 29, 2018 - 4:28pm Permalink
The Prius shifter is great. It takes all of ten seconds to get used to it, and by "returning to center," it allows the car to automatically go into park when you turn the car off with the start-stop button.
Roberto wrote on May 7, 2019 - 12:48pm Permalink
Yeah, I'm not a fan.......reminds me of my grandfather's old American car. I dislike it so much, that the E and CLS are off my list of possibilities for our next car. It's a shame they went this route.
Robert wrote on March 21, 2020 - 8:45pm Permalink
I hate it. I had a '13 E350 with a console shifter and it was perfect, now I have a newer one with a column shift. Everything else about the car is exactly what I want except that. I was told by many people that it's just fine and "you'll get used to it", but I have not and I truly hate it. I've come to the conclusion that all these people are generic drivers and have no need to controlling gears. I am not one of these people and I shift manually quite often. It's somewhat bearable if I'm going straight, but if turning forget it. Plus it automatically shifts after a short time despite my manual selection, so if I want to stay in a gear I have to constantly put it back in that gear. Whoever needs two hands on the wheel to drive is, well, a granny... You cannot steer quickly with two hands, and certainly cannot shift while doing so with this bogus setup. My car is a sports car, even per the mfg, so to take the shifter out is just retarded. It would be different if they offered it as an option, but no. What's next, bench seats? Maybe get rid of that bothersome AC and heater. Why not discontinue of any engine or motor over 100hp?
San Findello wrote on August 20, 2020 - 3:47am Permalink
I’ve driven nothing but Mercedes since college but this Underwhelming blunder just reeks reeks of downgrade ... and has me looking elsewhere for my next vehicle. I’m not going to pay a premium for an alleged prestige brand that looks like it has a cheap Honda looking screw on shaft shifter that looks like a clip on tie. Keep the cheesy interior mood color lamps and get me back a stylish and ergonomic center shifter.