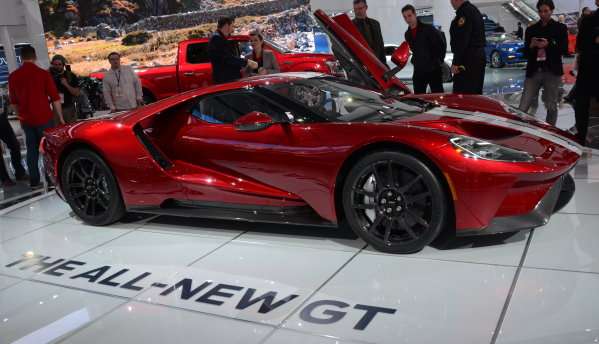 The first production cars of the latest edition of the Ford GT started rolling off the assembly line in Multimatic Inc. in Markham, Ontario in December of last year and Ford finally released the official specifications. But the debate in the forums is whether the Ford GT is true to its heritage or a commercial gimmick. The question is whether the new GT a success or failure, is it a marketing gimmick or living up to it's legacy and besting Europe once again.
Advertisement

The latest gem in Ford’s storied super car history makes 647HP, 550 ft-lb torque and will apparently reach a maximum speed of 216 miles an hour. Ford went so far to ensure the car met expectations as to purchase both a Ferrari 458 Speciale and a McLaren 675LT. Other specifications are a 2.9 second 0-60 and a fuel efficiency rating of 11 mpg city and 18 mpg highway with a combined of 14 mpg. That last spec as fueled criticism, after all the GT does have the “EcoBoost” label on the engine, shouldn’t it get better mileage than the supercharged V8 in the last edition? Wasn’t fuel efficiency the point of the development of the EcoBoost engines to being with? Shouldn’t the GT be true to the first car and have a V8 behind the driver’s seat?

To answer the question of whether the Ford GT is true to it’s heritage I believe it’s more important to consider what was motivation behind the development of the first GT to begin with. As we all hopefully know the original Ford GT was developed for the sole purpose of winning Le Mans 24 hour endurance series races, more to the point beating the Ferrari.

While the origin of the Ford GT may have resulted from an ego battle between two very wealthy men, it’s impact on the sport of endurance auto racing was far reaching. After Ford pulled direct support from the series privateers drove a GT to victory two more years. After the GT relented, another performance stalwart Porsche used the opportunity to carve their own LeMans legacy, and the door was forever open to other privateers, Porsche undeniably developed the similarly legendary 917 to beat the late 60’s era class leading GT.

The Ford GT’s history is of course old news, the question is does this new car live up to it’s legacy?

Well, the car has only been out a year, however the #68 Ford GT did beat Ferrari among other notable manufacturers in GTLM class of the 2016 LeMans 24 hour endurance race. For those that don’t know GTLM is the pinnacle class of production based entrants, this is where Porsche, Ferrari, Corvette, Aston Martin, and in the near future BMW put their best head to head. Flash forward to 2017 and Porsche’s long-time rear engined 911 has been updated to become the race-spec only 911 RSR a mid-engined car for the LMGTE and GTLM series. GM has it’s own more recent LeMans legacy to consider, and now that an unmistakably rear-engined though heavily camouflaged Corvette pictures are available, it’s fair to at least ask the question, without the Ford GT would we have pictures of a mid-engined Corvette in 2017?

Back to the question is the GT true to it’s heritage? The Ford GT is now winning GTLM endurance races and forcing stalwarts Ferrari and Porsche to redesign their entrants into the field in order to better compete. The 3.5 EcoBoost is inarguably a key part of the winning design, allowing the among the best power to weight ratios which in this company can be matched, however it also allows the best aerodynamics package, which apparently thus far cannot.

To this author, while hopefully the history of this latest edition of the Ford GT is far from done, it does appear to be earning it’s namesake. If the point of the Ford GT is to win races it’s a success, if living up to it’s legacy means to effect change in the auto industry it is also a success. To answer the question; the Ford GT may be the finest example of smart engineering currently available.

Steven wrote on February 7, 2017 - 10:39am Permalink
The point of fitting the V6 was not primarily for roadgoing fuel economy, but to enable the shape of the rear half of the car, and consequent airflow to the rear wing. The V6 is ~13cm shorter in length vs Ford's current V8s. Further, turbocharging enables a larger tuning envelope in response to Balance of Performance measures imposed by governing bodies. Insofar as it's the optimal package for Le Mans rather than a facile throwback to the 1960s (which they'd already done in 2005), the 2017 GT is as true to the original as one could possibly imagine.
Steve Meyer wrote on February 8, 2017 - 9:07am Permalink
I appreciate the more detailed technical explanation, we are in agreement on the car.

LG's New EV Battery Plant Is a Welcome News for Tesla
Tesla Giga Berlin's New Hurdle: It's Not Only the Gov't, but Now Tesla Itself
END_OF_DOCUMENT_TOKEN_TO_BE_REPLACED