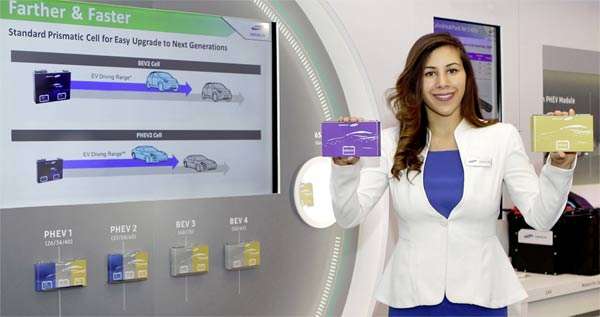 Range anxiety is one of the main hurdles for most EV vehicles manufacturers in the coming years, the ability for the vehicle to go as far as possible on a single charge. Samsung may now have the answer with a new battery cell in the works, which plans to provide a range of up to 372 miles and can be charged in 20 minutes.
Advertisement

Samsung’s SDI battery arm may just have the answer for the next stage of electric vehicles with a battery cell that doesn't just have a range of 372 miles, but can also be charged in 20 minutes to give a 310 mile range at 80% capacity. If all goes to plan, it will make EV vehicles that much more appealing to the wider market.

The new Samsung battery was released at the North American Auto Show(NAIAS) in Detroit and also boasts a weight decrease of around 10% as compared to the current batteries produced by Samsung.

The excitement may be starting now, but full production will most likely be 2021, which should also line up with announcements from other manufacturers along with their autonomous vehicles. The fast charging and extra range would go a long way to alleviate range anxiety in current EV cars as a quick rest or stopover will give you enough time to give you over 300 miles of range. If you compare this to Tesla's current superchargers, which will give you around 170 miles for a 30 minute charge, the increase is quite impressive.

However, Tesla will not be resting on their laurels as the ultimate aim is for Tesla superchargers to get their recharge times down to the 10 minute mark, busting Samsung's offering by the time of its release. Tesla are also consistently boosting the maximum output of their charge stations, which should mean charged times will steadily drop by the time of the Samsung's battery.

Samsung's STI website states that the "integrated battery module" will maximise safety and energy efficiency with more than 24 cells giving a capacity of 6~8kWh, compared to a conventional EV battery which has 12 cells and only 2~3kWh. “The high-energy density battery cell with the fast charging capability and the integrated battery module are the innovative technologies with full potentials that can transform the market. Expectations are high that we will be able to accelerate the vehicle electrification utilizing these technologies with improved driving range, manufacturing efficiency and user convenience,” stated a Samsung official.

Tesla themselves have invested heavily in their Gigafactory in Nevada and with their close links with Panasonic will undoubtedly be pushing the envelope themselves with their own battery cells and modules by the time the Samsung battery offering hits the market. The EV battery wars should ultimately mean quicker charge times and more range for everybody in the long run, which is ultimately great news for anybody thinking of buying an EV vehicle in the next few years. Nothing like some healthy competition!