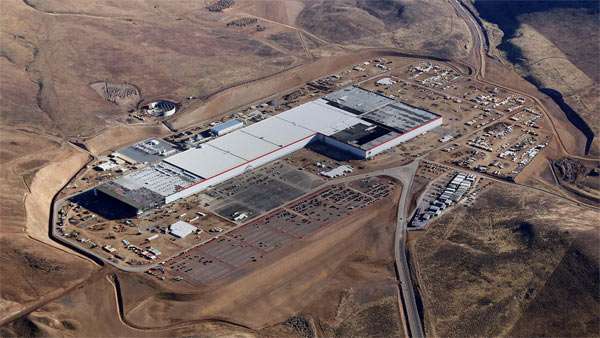 Tesla announced on their blog yesterday that battery cell production has begun at their Gigafactory in Nevada, eventually ramping up to full production in what will be one of the largest factories in the world when fully operational.
Advertisement

In a joint venture between Tesla and Panasonic the factory will be producing lithium-ion battery cells for both Tesla’s Powerwall 2 and Powerpack 2 energy products and vehicles, especially the upcoming Model 3. The blog post goes on to say, 'The high performance cylindrical “2170 cell” was jointly designed and engineered by Tesla and Panasonic to offer the best performance at the lowest production cost in an optimal form factor for both electric vehicles and energy products.' The factory will start production on the energy products first before producing the batteries for their upcoming Model 3 in the second quarter of the year.

The Gigafactory is probably the biggest thing to be built in the area since Area 51(or is it?!?) so the factory is being built in phases, with each phase being operational for production before further expansion. At this point the factory has a footprint of 1.9 million square feet, with 4.9 million square feet of working space across several floors. Pretty impressive, as only 30% of the factory is currently finished. The sheer size of the operation ultimately aims to bring down the price of batteries and employs 6,500 full-time local employees when fully operational. The ultimate aim is to be fully operational by 2018 and produce more lithium ion batteries than was produced globally in 2013. That's around 35 gigawatt-hours a year.

Tesla have big plans all round and hope to reach sales of 500,000 Model 3 vehicles by 2018. With a pricetag of $35,000 the markup price is currently unprofitable, so driving down the costs of battery production will take up the slack, according to Bloomberg. Battery pricing also fell during 2016 by 22% and may drop another 15- 20% in 2017 according to Bloomberg New Energy Finance, so it's no wonder the Gigafactory has to get up to speed as soon as possible.

For Tesla to lead the charge in the EV market, battery production is crucial according to rocktechlithium.com who state that 'there simply aren’t enough lithium-ion batteries being made anywhere for Tesla to achieve its goal of 500,000 Model 3 sales by 2018.' With other manufacturers opting to buy in their batteries from the likes of LG Chem and Samsung, Tesla are going all in to drive down the costs of battery cell production, which will also mean battery cells being produced on US shores, instead of the 88% global lithium ion cells currently being produced in China, Japan and South Korea. This means an all-American product made by American workers , which will always be a winner for local morale.

You have to hand it to Tesla for not just betting big on their own battery production but also ultimately becoming an all-American vehicle manufacturer, with 95% of the upcoming Model 3 being made in the US, with 25,000 of the 30,000 employees being based there, according to rocktechlithium.com. It still stands for something for a product to be made on home shores by local hands, which is why we hope Tesla do hit all their targets, even if it is for having the guts to go in this big. It's still early days in the EV market, but it seems if anyone is pushing the boundaries, Tesla are having a good go at it.