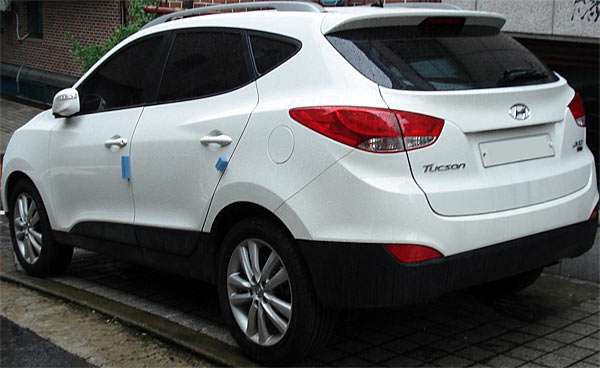 The race is on for providing the EV vehicle with the furthest range and Hyundai are on the case with a new fuel cell for the Tucson, possibly available by January 2018 which will provide a 348 mile range.
Advertisement

The first fuel cell on the Hyundai Tucson which debuted in June 2014 had a decent enough range at the time, but the new fuel cell on the Tucson IX SUV will increase the range by 30% from 265 miles to 348 on a full tank of hydrogen. The planned release of the vehicle could be January 2018 and the company hope to keep the price around $50,000 to keep competitive with the rest of the SUV market. With subsidies for EV vehicles, this price point may be far lower in reality. The new Tucson Fuel Cell Electric Vehicle (FCEV) SUV could be debuted in the middle of 2017, with orders being taken by the third quarter.

'Before it brings out a new hydrogen-powered vehicle, Hyundai will introduce a commercial fuel cell bus around the same time that Toyota brings out one of its own. Although not much is known about this new bus, expect a marketing rollout sometime in 2017.' as reported by Nikkei. The SUV has a 80 kW motor developed by Enova Systems of Torrance, California. Hyundai's Tucson Fuel Cell is only available currently in California, with only a leasing option available.

If Hyundai can reach their proposed 348 mile range or better it at time of release, it will go a long way to alleviate range anxiety, but the company has a lot of competition snapping at its heels along with going down the road with hydrogen technology.
In the hydrogen stakes the Tucson SUV will have a bigger range than the Toyota Mirai at 312 miles but not as much as the Honda Clarity with 366 miles. Range ability aside, the other concern is the amount of hydrogen refuelling points, which may be the long-term decider on if hydrogen is to win out in the end. Currently, the Chevrolet Bolt, BMW i3 and Tesla model S electric vehicles have a range of 186.4 miles, but with the likes of Tesla promising a 250 mile range with the upcoming model 3 and the rollout of their national supercharger points, the new Tucson will have stiff competition.

The Tesla Model X males, so see upgrades by the beginning of 2018 with a bigger range and with Tesla marketing their performance side of things, with even the base model being able to do 0-60mph in 6 seconds, consumers will at least have a good variety of vehicles to choose from.

However, Hyundai are also hedging their bets with the IONIQ in hybrid and fully electric form, which means that the next few years will be interesting to see how hydrogen fuel cells progress compared to the rest of the EV market.