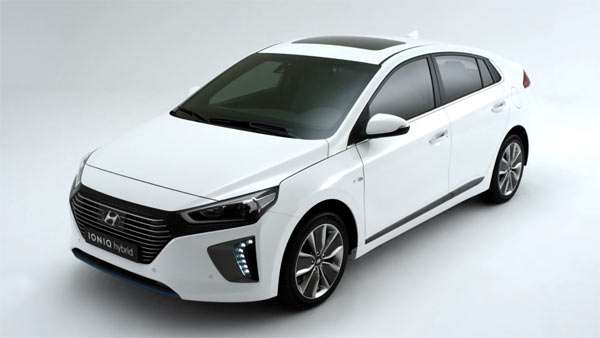 The Hyundai Ioniq is giving customers loads of options with its hybrid, hybrid plug-in and fully electric options, boys also winning the stakes when it comes to fuel economy.
Advertisement

According to fueleconomy.gov, the EPA's source for fuel economy information, all three variants of the Ioniq have done remarkably well in the form of the Hyundai models the Ioniq Blue hybrid, the hybrid Ioniq and the Ioniq Electric. All 3 beat the 2017 Toyota Prius as the Ioniq's possible closest competitor. The fueleconomy.gov website has a rather nice side-by-side comparison facility where you can load in the cars of your choice to compare gas/electric milage and even end-user costs.

This isn't too shabby for Hyundai's first dedicated electric drivetrain and this vehicle to offer all three variants from hybrids to fully electric. The Ioniq has also been rated by the independent Euro NCAP vehicle safety assessment program as having five stars for safety, being the highest possible. It won over in the safety stakes for its autonomous emergency braking, Lane departure warning, smart cruise control and Lane keeping assist. Other safety features incorporate 53% high-strength steel, which benefits a more rigid chassis with higher impact absorption and distortion in a collision. The addition of seven airbags and a drivers knee airbag complement the rest of the safety features. 'The IONIQ is an innovative concept in the market for green motoring, with these latest awards bringing further global recognition to Hyundai’s forward-looking design philosophy.' said Hyundai’s Head of Operations Mike Song.

Some of the features that may make the Ioniq a winner in 2017 are familiarity when coming from a standard vehicles. There are no radical departures in the design, which should make buyers feel more at home when it comes to crossing over to a hybrid or fully electric. Drivability has also been a main feature with the Ioniq using a dual clutch system which also bests the Prius. the only downside at the moment is the range of the Ioniq being 124 miles, when the likes of Tesla will be producing 200+ miles range vehicles very soon. It's likely that Hyundai will respond by 2018 with 200 mile versions and/or upgrades their present versions.

Hyundai are also pushing in the autonomous driving stakes, which has already filtering down to their main crop of vehicles which means along with their new top fuel economy rating should mean buoyant sales as we roll into 2017.