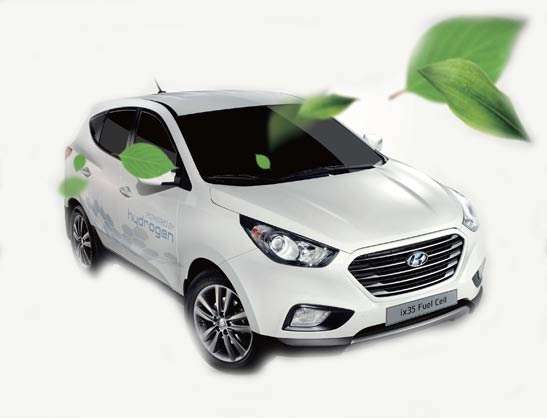 Hyundai Motors recently confirmed a new hydrogen fuelled SUV model at CES coming in 2018 and with a full electric vehicle lineup already in the pipeline are they hedging their bets?
Advertisement

The executive vice president of Hyundai, Seung Ho Hwang gave a press conference at CES and announced that the Hyundai ix35 Hydrogen Fuel Cell SUV will be arriving in 2018, with a planned debut at the Geneva Motor Show. The new SUV will be built on a new platform and have a completely new styling with a lighter body, much further range and better price tag. The ix35 fuel cell vehicle currently available weighs in at 1830 kg and a price point which has put off many early adopters. The next fuel cell vehicle hopes to remedy all the aspects of the current ix35 with a 30% improvement for the SUV.

There are no official figures as yet, but the vehicle is expected to be able to do 300+ miles on a full tank and possibly further, which should go along way to alleviate range anxiety. It will also come with a new driver assistance systems and according to the Hyundai website be possibly the most environmentally friendly EV vehicle on the road.

The Hyundai website also says that the advantages of a hydrogen cell vehicle is the quick refueling time only taking three minutes to fully fuel the ix35 Fuel Cell with an operating range of 369 miles. If you're also thinking that hydrogen is too much of a volatile substance to use in a vehicle Hyundai also address this point, saying that vehicles will include a whole host of intelligent sensors which will detect anomalies and shut down the hydrogen in the event of a collision. Hyundai's hydrogen tanks have also been safety tested the fire tests, crash tests and have hydrogen tank certification. The tanks are also fabricated from aluminum and carbon composites which seemed to have had everything thrown at them from burn tests to crash tests with guns to prove their safety worth. The vehicles also have internal hydrogen sensors which will detect any possible hydrogen leakage into the cabin. The new ix35 will go face-to-face with the Toyota Mirai and the Honda Clarity in the hydrogen stakes.

Hyundai already have the hybrid and electric Ioniq and the plug-in version coming in 2017, which fulfills the gamut of the electric market, so to cover hydrogen fuel cells aswell seems to be hedging their bets as to which technology will win out at the end. With the likes of Tesla and Chevrolet seemingly paving the way for battery-powered vehicles and the slow rollout of charging facilities, you would think the battery brigade have a good head start, but hydrogen fuel cells seem to be pushing the top range factor and speed of refueling, which could possibly win out with a public in the long run as range anxiety is such a priority.

In response to if hydrogen fuel cells are a viable long-term solution, Hyundai are seeing this as a propriety technology and as it's still early days in the EV market, it will be truly interesting to see which technologies do win out in the end. The 2018 ix35 will definitely give the public something to chew over if hydrogen is the way forward.

Parks McCants wrote on January 11, 2017 - 9:16pm Permalink
Where will it be available? Thank you.
Kafantaris wrote on January 12, 2017 - 4:08am Permalink
Battery cars are relatively simple vehicles, which is why a century ago their development preceded gasoline cars. Though they came a long way since then, battery cars still need to be charged, and with raw power made elsewhere. Such is not the case with hydrogen cars -- or gasoline cars for that matter -- which make their power from the fuel they carry onboard. Automotive engineers took this nagging fact into account, and took into account also the finite capacity of our electric grid. They rightly concluded that there is an inherent limitation with battery cars -- one that does not go away with high capacity batteries or with fast chargers. This might explain why 62% of automotive executives believe battery-powered cars will fail and 78% believe hydrogen fuel cell cars are the future.
Parks McCants wrote on January 12, 2017 - 5:01pm Permalink
Agreed!