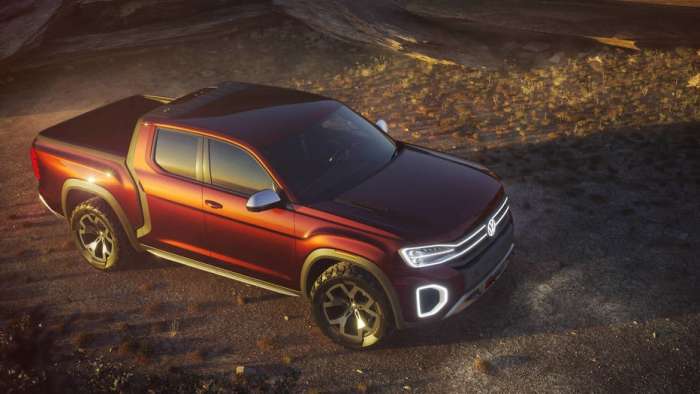 Will The Tanoak Be Built? Only VW Has The Answer

Will the VW Tanoak be built? Looking at all of the potentials, there's only one firm answer to this question: only VW knows the answer and it isn't talking.
Advertisement

At this past spring’s New York International Auto Show, Volkswagen’s showed a concept version of a pickup, based on the Chattanooga-built three-row Atlas SUV. Called the Tanoak, was named after an American plant. The automaker built the design study to get a feel for consumer response for a modern VW pickup. VW Offers Consumers Chance To See New Pickup.

VW Has Had Pickups In The Past

Though many consumers today probably think this is VW’s first try at a pickup, the Tanoak is undoubtedly not the first VW pickup. As far back as 1965, the automaker had pickup versions of its vehicles. In the 1960s, for instance, the automaker made a working pickup version of its MicroBus.

In the early to mid-1970s, there was a real, albeit subcompact, a pickup truck based on the VW Rabbit. The Rabbit, if you are familiar with the vehicle, is the direct, lineal ancestor of today’s Golf family. After 1982, the pickup became history until this year’s NY Auto Show.

It’s not as if VW doesn’t have a working compact pickup because it does. It is named the Amarok, and it is a reliable vehicle. The problem with the Amarok, from a U.S. standpoint, is that it has only a diesel powerplant. Other than that it would make an interesting entry in the small pickup market especially with the impending arrival of the renewed Ford Ranger. However, according to a Ford spokesman, at that time, VW had no interest in selling into the crowded U.S.market because, a spokesman said at that time, there wasn’t room in VW’s plan for the pickup. It looks as if that position has changed. Ford is the leading truck manufacturer.

According to Autocar, a United Kingdom motoring magazine, VW has reversed direction and is reportedly considering a pickup version, something. This information not only comes from Autocar but there are other sources, as well, that says, VW is actively considering a pickup. Indeed, the automaker announced that the design concept that was at the auto show might make it to production. However, there were concerns that not every VW manager shared. For example, Hinrich Woebcken, chief of VW of America, said confidently,“It fits the brand well.” He emphasized that “because we want to get more American in the U.S. [market]” VW has made the study, but it is not moving quickly. Woebcken said that “it’s something we have to look at carefully.”

While Woebcken made the statement that this truck segment is tough to crack due to its orientation to America and U.S-made products, he may have been slightly off the market when he said that “It’s a very patriotic segment, which American manufacturers dominate.” Granted, it is a tough market for a new marque, which is what the Tanoak would be, to crack, it isn’t impossible.

If it were that tough, then, why are Toyota and Nissan selling as well as they are? Interestingly, said MSN Autos, the data doesn’t quite jibe with the picture Woebcken painted. In the midsized pickup market, where Tanoak would compete, another import is the leading seller and has been for some years. Toyota’s Tacoma is the best-seller, leading each American model by a considerable margin. The Tacoma has sold a total of about 162,000 vehicles through the first half of the year. The name Toyota indeed isn’t an American name, nor is it an American make, if our guide to makes of the world has any validity. Indeed, Toyo leads all the other sellers by massive amounts.

For example, Chevrolet’s Colorado, an award-winning midsized pickup that has been praised by publications, both in print and online, has only sold 69,000 vehicles through the first half of the year. Indeed, looking at Colorado versus the Tacoma, you will see that the Tacoma has sold 53,000 more pickups for the same period. And, even combining the GMC Canyon, Colorado’s corporate twin, U.S. makes still fall about 30,000 units short.

Domestics Did Well, But Not As Well As Imports

Granted, the domestic models did reasonably well for the first half of the year, but, GMC still lost out to Nissan, while Nissan did lose to Chevy. It’s funny, too, that Nissan hasn’t changed the design of its Frontier for years and yet Japan’s number two automaker still moved 40,000 vehicles for the same period. And, then there’s the highly received Honda Ridgeline which has only sold 15,000 units. Granted, the Honda is only available in one flavor, rather than in different versions, but, it is still a competent vehicle. The bottom line here is that the real competition in this segment is not American, but imported. For the record, this is one of the hottest-selling market segments in the automotive world.

Is there a chance that the VW will build the Tanoak? It seems to rest on a couple of factors. The first is that the pickup’s success would be tied very closely to the fate of VW’s midsized three-row SUV – the Atlas. You see, the SUV would likely bankroll the new pickup model. So, as they say, as the Atlas goes, so will the Tanoak. If sales of the Atlas remain respectable but flat, then it is quite unlikely that the Tanoak will be on the Chattanooga build sheet.

The second is involves real world sales. For example, Atlas sales stand at about 30,000. Looking at the competition, sales of the GMC Acadia are about 60,000. They are roughly a-third of the Honda Pilot’s sales figures of 90,000. And, they are nearly a-quarter of the hot-selling Ford Explorer whose sales are about 120,000 Granted, Atlas is still the new kid on the SUV block, so it remains to be seen what sales will look like when they are wrapped up in December. So far, they are running just about 4,000 units per month which will put the Atlas at 50,000 vehicles for its first full sales year. And, whether that is enough to make sure the sales are high enough to ensure that the Tanoak will be built is just unknown.

Tanoak Is Sleek And Attractive