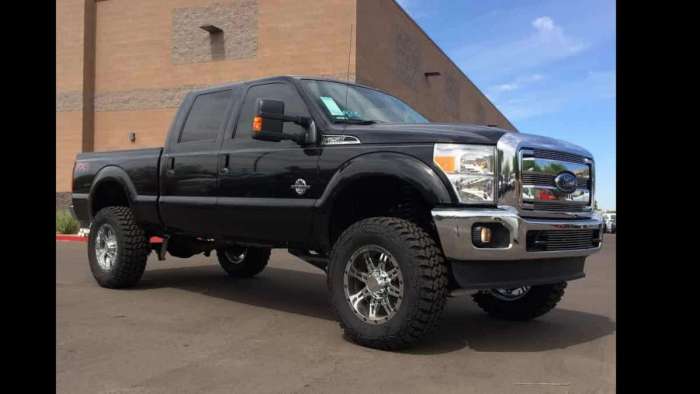 Watch As A Ford F250 Sticks It With A Perfect Landing; And Set A Record

Do you want to know what to do with an old Ford F250? One racer had a unique idea, try for a new Guiness Book of Records mark by sticking a 10-point landing.
Advertisement

If you have owned a particular truck for a long time, you know that it has a life of its own. Though trucks are mechanical things, not living beings, however, you can never escape the feeling that the vehicle you are driving, a Ford F150 or F250 Super Duty, for example, doesn’t have a life of its own.

Maybe that explains it. Explain what? Perhaps it explains what happened to a junker F250 owned by Mark Freeman, a professional motorcross racer. By now, you are probably scratching your heads, wondering why we are talking about this. It is a good question, so let's go back to the very start of this tale, as related by The Ford Authority.

It seems that Freeman picked up a beat-up V-10 F250 Super Duty that was on its last axles. Ready for the bone-yard, Freeman, decided that the F250 should have a proper send-off.

The first thing that the race driver accomplished was parting out those bits that people wanted from it. Then, Freeman made final plans for the beaten-up three-quarter-ton pickup. Perhaps, in a fitting sort of memorial, arrangements were made for a jump between two dirt ramps that are on the racer’s large property. Rather than making it a manned jump, which wouldn’t have done the driver much good – especially the descent -- Freeman made plans for an unmanned launch.

So, as the appointed time neared, Freeman had to figure out how to get the F250 Super Duty started and rolling toward its destiny. His first plan involved wedging a board between the throttle and the driver’s seat, throwing the vehicle into gear, and then getting the heck out of the cab. Now, if this looks a bit dangerous, you are right, it is more than a bit on the awesomely, hugely awful idea side. However, the problem of getting out of the way of the pickup was solved, and the whole show was set to begin.

Watch for news about the F150 and other Ford trucks like the F250 Super Duty. You will also receive information about planned changes to the Ford F150 and other trucks. Click To Subscribe To Torque News YouTube Channel For Daily Ford and Automotive Industry News Analysis.

To solve the problem of getting out of the pickup, Freeman turned to electronics, rigging up a remote kill box so that the F250 would halt before it missed the jump, possibly hitting a tree, a bush, or a shrub. Getting things right for the run-up, it then took several attempts to get the F250 Super Duty on the right path, but it looks like fate took over to give the F250 the send-off it deserved.

Speeding unerringly downhill toward the ramp, the F250 scored perfect takeoff. Rocketing towards the opposite hill, the F250 sticks its landing for a perfect 10. The damage didn’t seem too bad, but, when they tried to get the pickup moving under its power, the F250 wouldn’t budge. The jump was just too much for the well-worn wreck whose next date was with the crusher.

Source: The Ford Authority (TFA) is one of the leading independent news and information sources on the Ford Motor Company and its products. TFA presents up-to-date information with daily posts.