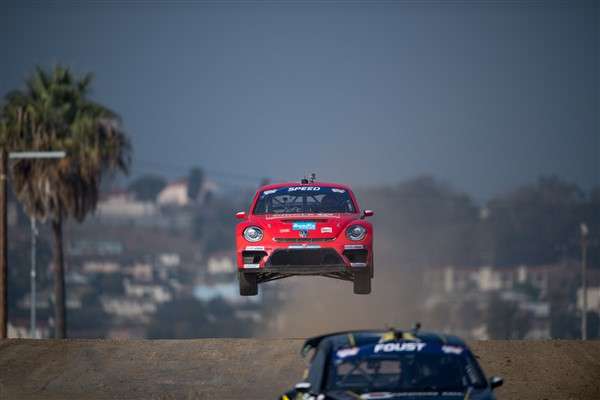 For the third consecutive year, VW Andretti Red Bull GRC driver Scott Speed took the driver's point championship. He was followed closely by his teammate Tanner Foust, who came within 18 points of pulling into the lead as he scored his fifth victory of the season. VW, by the way, won the Manufacturer's Championship for 2017.
Advertisement

From Atlantic City through the finale Saturday in Los Angeles, the battle for the driver’s championship of the Red Bull Global Rallycross series has been a crap shoot. Until that point, Tanner Foust was solidly in top place for the driver’s trophy as the long hybrid racing season sped toward its finish.

Troubled by some miscues and a major race-ending breakdown, Foust was bypassed by his teammate on the Volkswagen Andretti Red Bull GRC Scott Speed, whose smooth, error-free, yet spirited driving put him in the lead for the driving championship for the first time in the 11-event season. With Foust out of the race in the second part of the Atlantic City doubleheader, Speed played it mostly by the numbers as he bounced and flew on his way to victory in the Second Final of that August weekend.

At one point in the race weekend, Speed used a combination of an inside line and late braking to pass the front-runner and take over sole possession of first place in that race. When the checkered flag fell, Speed was atop the podium with a pair of first-place wins under his belt and a solid lock on the championship. Are race questions just the sound of sour grapes?

Foust, though, was a force to be reckoned with as the gap separating Speed and Foust remained close as the Red Bull Global Rallycross moved into Seattle for that late-season race. In that West Coast event, Foust overcame his mechanical troubles and driving issues to enjoy near-flawless racing results. And, even though he did come in first in the doubleheader events, Speed was right behind him as the VW Andretti teammates finished one-two. The gap between them, however, had shrunk to only 30 points, while it lengthened over the third place team.

Moving to the single-event Port of Los Angeles final event, there were 81 points up for grabs, enough for Foust to overtake Speed and move into first place, as he had done in 2010 and 2011, the two times he won the championship. Interestingly, if Speed had finished far out of the top three, then the final standings might easily have had a far different look. However, though Foust again ran a superb race, earning a victory, Speed was right behind him, giving the VW Andretti team not only another one-two finish but also giving it their third in a row. The final race was the decider.

Speed keeps it real, but relaxed

Speed, driver of the No. 41 Oberto Circle K Beetle GRC, played it coy all weekend. He qualified second on Friday, but, he had to battle back to second- and third-place finishes in the early Heat races on Saturday.

Speed then won his Semifinal as he moved into great position for the Final. Despite his starting position, Speed was quickly shuffled to fourth in the pack during the early stages of the race on the 0.65-mile track. Not doing anything flashy, but driving smoothly and steadily, Speed clawed his way back and into second place where he finished, clinching his third consecutive driving championship.

“The whole week leading up to the race, I was constantly thinking of the what-ifs, all the problems that could happen going in with a solid lead,” Speed told an interviewer. “My hat is off to everyone – I have the best team out there. I’m so lucky to have them, and we have great partners in Volkswagen, Circle K, Oberto, Expedite Home Loans and Rockstar. It was truly a team effort.!”

For Foust, it was a killer weekend as he qualified fastest on Friday. He kept the No. 34 Rockstar Energy Drink GRC, in the top spot as he drove smoothly through Saturday's Heats, Semifinal and ultimately the final. Foust had a topnotch season with five wins. He finished second in the Driver’s Championship for the second year in a row.

“The key is qualifying,” Foust, told the interviewer. “That sets up you for success for the rest of the weekend.We snuck away from Scott, and then there was a glimmer of hope. We came into the Final actually having a chance to win [the championship] if Scott finished eighth or worst. I’m not going to lie, that was a big gap in points, but I was feeling it. I’m so happy for our team on the Rockstar side of the Volkswagen Andretti tent.”

Point lead shrinks, but not enough

Despite his hope for an eighth place, it wasn’t to be. When the dust settled, second-place Speed finished the 2017 season with 826 points, 19 ahead of Foust. Volkswagen Andretti Rallycross also celebrated its third consecutive Manufacturer’s Championship.

“We’re so excited to end the 2017 … season with the final race win, the Driver’s Championship and the Manufacturer’s title,” said Hinrich Woebcken, chief exec of the North America Region, Volkswagen, and of the Volkswagen Group of America. “This is a great day for the Volkswagen Andretti Rallycross team, and we’re happy to be part of it today with the team in Los Angeles.”

Sven Smeets, motorsport director of VW, congratulated both drivers and the team “for another fantastic season,” he told the interviewer. “It could not end better with Scott winning his third title and Tanner winning the last race. It proves the partnership between Volkswagen of America, Andretti Autosport, and Volkswagen Motorsport is the perfect match to win races and titles! Looking forward to next year already, but first, it is time to celebrate.”

VW Andretti will return to action next season for the 2018 version of this series – the Red Bull Global Rallycross Championship.