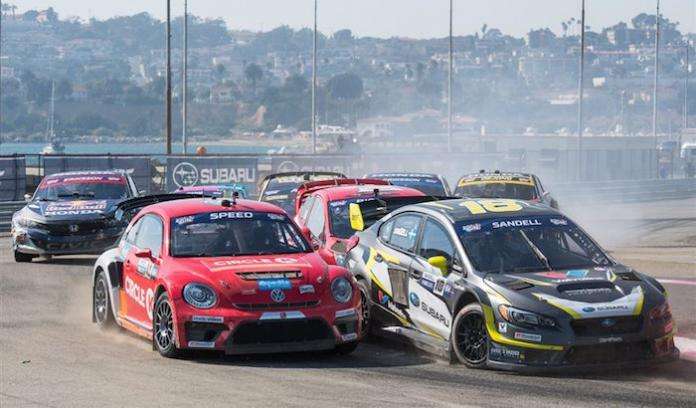 Subaru WRX STI Gets 5th Podium in LA; VW Dominates GRC But Are They Cheating

The #18 Subaru WRX STI driven by Patrik Sandell gets another podium finish. The VW Beetles dominate again, but are they cheating?
Advertisement

It was a year that Subaru put new WRX STI Supercars on the Red Bull Global Rallycross circuit, with a new driver and Chris Atkinson returning for his first full season of GRC. Subaru made significant progress this season with Sandell securing another podium to wrap up a successful rallycross year.

Subaru came on strong at the end of the season as the third place finish in LA marks the fourth podium in the last four races, and fifth this season by the SRTUSA WRX STI team. But it was another season dominated by Tanner Foust and Scott Speed and the VW Andretti team. This is the VW team’s third-straight year-in-a row to win the teams' championship. Are the VW Beetles superior, or are the drivers that much better than everyone else, or could VW be cheating?

Why is Volkswagen so dominant?

It been reported by Build Race Party that VW Andretti may be using traction control to dominate Red Bull Global Rallycross. This driver aids work good on the street and can save lives, but it’s specifically banned in the GRC racing series. If used by Scott Speed and Tanner Foust, it would clearly give them an unfair advantage launching off the line and in the corners.

Foust, who was chasing a third straight title for VW, dominated the weekend in LA again, winning each of his three heats and his semi-final on his way to the main event. Scott Speed who also dominated in almost every event this season finished second ahead of Patrik Sandell this weekend securing Andretti's third-straight driver’s championship. 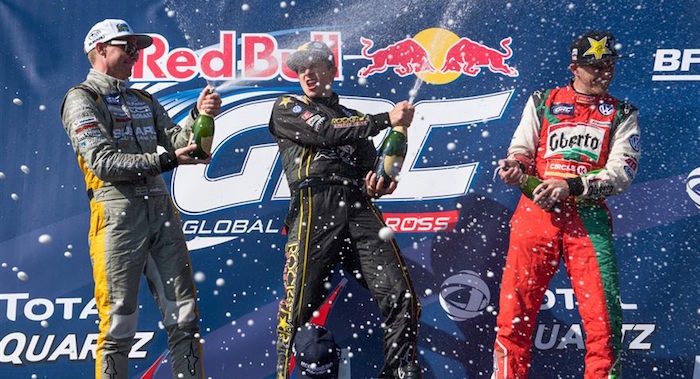 This is now the third year Scott Speed, Tanner Foust and the Volkswagen Andretti team seem almost unstoppable in the GRC series. Are they that good, or is something else going on? A video surfaced after the 2015 season showing Speed’s VW Beetle’s wheels slow and pause independently of each other, suggesting that a traction control system on the Beetle could be diverting power to other wheels as it detects one wheel is slipping.

If traction control was used in GRC, it could detect slip in the wheels, diverting power away from slipping wheels over to wheels that aren’t slipping. The result is that the 600hp car would be able to put down the maximum power to the ground possible. This would mean faster standing starts, and better traction in tight corners and on loose surfaces. All things the Andretti Beetles seem to posses while the competition can’t pull off.

Bill Caswell, rally driver and writer for Build Race Party who was at the final GRC race in LA 2015, says “The cars made it through post race inspection, so either the system is really good, really complicated, or we’re seeing something that works like traction control but really isn’t.”

The article also says VW is possibly using Bluetooth to remotely trigger the traction control system before the car goes out, that the system could be triggered by GPS (when it senses the car is on the race circuit) or that it’s activated by the car turning or launching from a standing start. This would allow the team to have the system completely off for inspection, but on for competition.

It could be just sour grapes from the other GRC teams, as it’s not unusual for one manufacturer to dominated a race series like VW has done for the past three years. Subaru’s WRX STI NBR won the grueling Nurburgring 24-hr race in 2011, 2012, 2015 and 2016. It could be that VW Andretti has better equipment, and the best drivers.

It’s unlikely VW could cheat and get away with it three years in-a-row. Subaru is making progress and seems to be catching up as Patrik Sandell gets another podium finish in the #18 Subaru WRX STI and his third podium of the season in LA. SRTUSA now looks ahead at how to improve the WRX STI GRC Supercars even more and catch Scott Speed and Tanner Foust in the VW Beetles in 2018.

Marc Stern wrote on October 16, 2017 - 12:41pm Permalink
Denis, I don't think it is much more than sour grapes. If a writer for a major building journal wonders how it could be implemented and asks how the GRC Beetles can get through inspection, then I would have echo those sentiments. I find it especially interesting that someone has asked whether it might be Bluetooth-linked? I don't think that could be the case as the range of that particular style of device is rather limited.
Denis Flierl wrote on October 17, 2017 - 7:16am Permalink
VW does seem to have an advantage over all the other cars. It will be interesting to see if any other information surfaces in the future Marc.
Marc Stern wrote on October 19, 2017 - 6:47pm Permalink
If you look at the other race series VW is or has been involved it like the enduro series with its Audis, you'll find that the automaker has been the winner of the Manufacturer's Championship several times in the last several years and it also has the winningest drivers, too. I have to attribute it to good engineering and development work. If it works that way in one series, I don't think it would be otherwise for the GRC Beetles. IMHO.
Denis Flierl wrote on October 20, 2017 - 10:51am Permalink
Once you get a reputation for cheating, unfortunately, it spills over to all their activities and people question everything.
Pete wrote on October 17, 2017 - 5:52pm Permalink
What? VW cheating? No way......
Denis Flierl wrote on October 18, 2017 - 6:16am Permalink
Not hard to believe, right? Thanks for reading Pete!