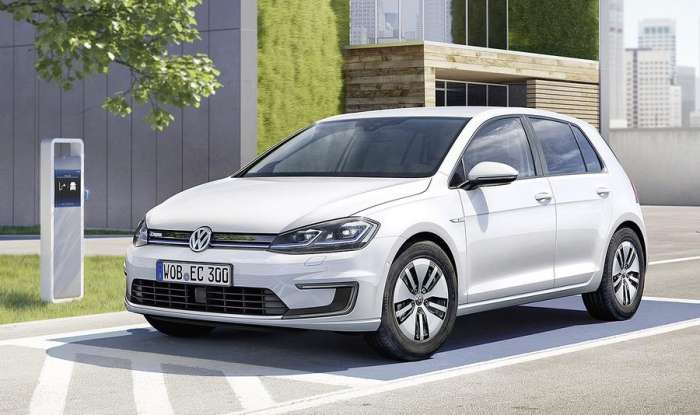 When the 2017 Volkswagen e-Golf goes on sale in the spring it will feature an improved 100 kWh motor and a better battery. The result of the improvements has been an improvement in range to 125 miles. With a 240-volt charging system, the battery can be charged in under six hours.
Advertisement

For the longest time, it has been claimed that the only thing holding back electric car demand is range. Various pundits have said that consumers are worried about vehicles whose range is less than the average driver’s commute across town.

That may estimate may be overdoing things a bit, but it is not by much. The situation has changed at a dizzying pace, especially since Tesla has been in the mass market, showing that upscale electric vehicles can both perform and have excellent range.

Not to be outdone by other automakers, the world’s number one car manufacturer, Volkswagen, made some changes to its e-Golf that push the electric vehicle into the ranks of vehicles that achieve good mileage.

Volkswagen upgraded the lithium-iron battery pack as well as the vehicle’s electric motor so that the 2017 e-Golf achieved the equivalent of 126 mpg in the city. The changes more than doubled e-Golf’s estimated range to 125 miles.

According to the Environmental Protection Agency (EPA), the e-Golf achieved an electric equivalent of 126 mpg in the city-11mpg on the highway-119 combined. The agency gave the compact battery electric vehicle a range of 125 miles.

To achieve its extended range, Volkswagen upgraded the e-Golf’s battery pack to 35.8 kWh. The automaker also upgraded the electric motor to 100 kWh. The motor is rated at 134 horsepower. The battery and motor are noticeably improved over earlier models. Previous e-Golfs had a range of 83 miles; 24.2 kWh batteries and 85 kWh motors. Top range in older models is 83 miles. The old motor produced 115 horsepower. Previous e-Golfs were rated at 126 mpg city-105 mpg highway-116 mpg-e combined.

Volkswagen will begin marketing the updated e-Golf this spring. SE and SEL Premium models will feature a 7.2 kW onboard charger. With a 240-volt charging system, the charge time is under six hours, according to the automaker. Higher trim models also feature DC fast-charging. Using DC fast-charging, the battery pack can be charged to 80 percent in an hour.

Lad wrote on February 26, 2017 - 11:28pm Permalink
Call me when it get an honest 200 miles or better
Marc Stern wrote on February 28, 2017 - 5:22pm Permalink
Well, nearly half way is better than none!! I honestly think a new battery tech is needed, maybe plastics, maybe heated Li-ion, probably something we don't even suspect yet. Could be a rare earth battery, or somesuch. I don't think it's far off as VW has commited to 20 new electrics by 2025, only eight years from now.