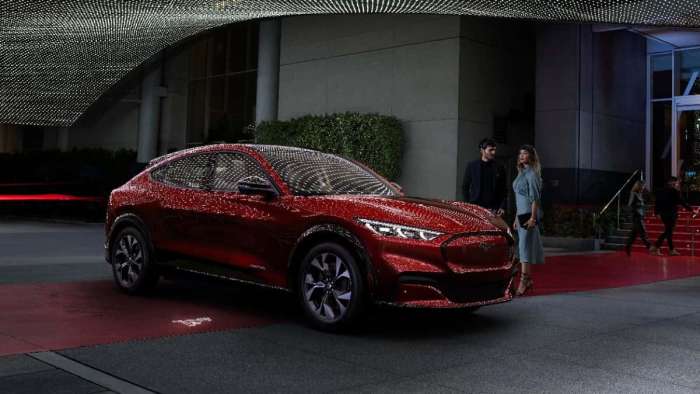 Valentine’s Is Electric, Especially For the Mustang Mach-E

In a forward-looking study, Valentine's Day gets much more electric if you are driving a Mustang Mach-E. Since it isn't here just yet, you do have to make other plans, though. How about a good hybrid?
Advertisement

Ahhh, Valentine’s Day. It’s the day when we renew the ties to our loved ones or set up new ones with those we want to be our loved ones. Remember the first time you saw your partner, whether it was across a room or at a function or the beach? Do you remember the thrill of things? It might have been your first date or your first dance or just your first glance! Whatever it was, it brought you together, and you have been there ever since, whether it’s one month, one year, 10 years, or half-a-century.

Today We Remember Something Special

On Valentine’s Day, we remember that time we first met our partners. Think about it. What was it that excited you and got your juices flowing? Was it the restaurant? Was it the beach date? Was it the car?

Believe it or not, Ford thinks that it may just be your car. The automaker, in a quick holiday news story, noted that whether you are “celebrating a new squeeze, revisiting an old flame or doing the anti-holiday night out, your new all-electric Mustang Mach-E can make whatever you do on Valentine’s Day, a little more special."

Indeed, in a forward-looking statement, the automaker looked to next year and asked, “Next Valentine’s Day, it might land you a second date – if you play your cards right.” Well, how about sooner than that! How about this: if you play your cards right, you may end up with your date card being full for a long time to come, well before next year. Wouldn't it be better?

However, Ford suggests, if you are driving a Mustang Mach-E, it could even be quicker. But, since the American introduction of the Mustang Mach-E is late this model year and since you are probably not willing to wait until next year, you are likely seeking a solution for right now. Indeed, if you are like most folks, you would probably like to be working on a permanent relationship that begins right now. Ford has a point about the Mustang Mach-E, it is likely to draw lots of interest from lots of people, including your date.

Ford acknowledges that if your date were to be impressed with the Mustang Mach-E and things looked promising, then “you better have a plan.” They suggested that a plan is to use the vehicle’s cloud-connected communications system, an improved SYNC® system. With the Sync® 4A system, you can “find the right place for a romantic dinner,” using Yelp reviews and ratings of the “hottest dining spots.”

All of this would be great advice if it were next year when Mustang Mach-Es roll off delivery trucks and into driveways en masse. You see, the first deliveries of the all-new all-electric SUV won’t begin until late this year. So, you’d better have a backup plan tonight if you are planning to go out tonight. Perhaps a Ford Escape Hybrid or an Explorer Hybrid will be an impressive ride before your Mustang Mach-E gets here.

A Good Plan Helps Out

Having an excellent plan for Valentine’s Day – today, of course -- is probably the best plan now, but, if you think that having a vehicle will help, then do consider the hybrids, for the moment. You still have a bit of a wait until the Mustang Mach-E is here. If you are interested in the new Mustang Mach-E, you can reserve one here..

(The survey was conducted by PSB, a global research and analytics consultancy. Conducted in June, the survey covered 3,000 people in Europe, the U.S.A., and China.)