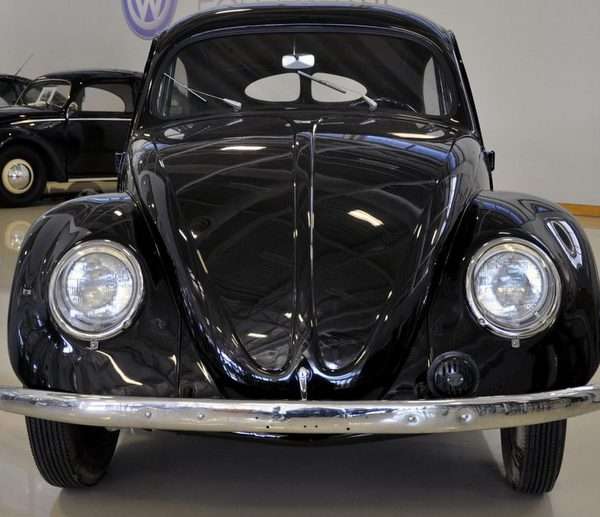 Here's the inspiration for the Thomas and Mays-designed Volkswagen Concept 1 that became the basis of the current generation of Volkswagen Beetles.
Advertisement

In a way, the movie “Back to the Future” and Volkswagen have a lot in common. How is it possible, you might ask? It’s an interesting question. Just how is it possible? Try this on for size: would you believe that a pair of designers went back to 1946 for their inspiration on a current model? Well, the designers didn’t physically try to get back to 1946 because the time-traveling DeLorean was tied up when they were doing their work. With no time machine available, the team had to find another way to gain inspiration. The team had to find a way back and, incredibly, it did.

Here is how it happened. When Freeman Thomas and J Mays were working on the Volkswagen Concept 1, which would become the basis for the current generations of Volkswagen Beetles, they went back to the past for their inspiration. Specifically, they turned to “Simi,” a 1946 Volkswagen Beetle Type 11. It is one of the few immediate postwar (World War II) Beetles that the automaker has as part of its specialized car collection.

“Simi” received its nickname while it was parked in the Simi Valley design study where Thomas and Mays did their work. Today, it sits in the Volkswagen Academy in Chattanooga, where it greets workers who are training to build VWs for the future.

“Simi” was constructed in 1946 when the Volkswagen plant in Wolfsburg was different management, the British Army. Britain, one of the victorious Allies of World War II, remained in Germany for several years as the defeated nation slowly rebuilt itself from the ground up. The interesting fact of that era was that the Brits offered the tooling and plans for the Beetle to any country that wanted them following the war, but there were no takers. The design they were pedaling was still very much the “people’s car” that Ferdinand Porsche had imagined more than a decade earlier, the automaker said.

Inside and out, chassis number 1062386 is the same simple vehicle that rolled off the assembly line in 1946. It was powered by a rear-mounted, air-cooled horizontally opposed four-cylinder that produced an incredible 24 horsepower. That it took forever to reach a reasonable operating speed was a given. It was a situation that continued until the mid-1960s as a generation of cars, known for their ease of maintenance, helped to make the name Volkswagen famous.

In the first year of production, they made 10,000 Beetles. The iconic tiny two-door with its front-mounted “trunk” and an engine mounted behind the rear axle was but a small start to what would become a legend.

Today, Volkswagen is the world number two automaker, right behind Toyota. It is not just a carmaker, but it is also a car collector. Its collection includes more than 30 rare, classic or unique VW products. They are located in Tennessee, Virginia and elsewhere.

Fahr Sicher wrote on September 23, 2016 - 8:46pm Permalink
The key design components that came from the original VW Type 1 Sedan (yes, I know it's a coupe) for the current Beetle was exterior color apparent in the interior, the bud vase, the individual circular instrument pod, and of course, the iconic shape. During the original design and engineering briefs, a lot of "old Beetle" negatives" had to be addressed too, which is why the 5-star safety rating was a requirement, as well as modern heat, A/C and other modern accommodations (like a fuel gauge). Mays and Thomas did a beautiful execution of the "Concept 1", but Dr. Piech made the requirement that it could only be produced if it would fit within the A4 (mid-90's) Golf/Jetta platform. That changed everything design wise - setting the driver seat well aft of the traditional location and requiring the extremely deep dash. The final "New Beetle" was a design sensation and was the original "retro car" following thereafter by T-birds, Mustangs, Camaros, Minis and others. As with most "retro cars however, the "cool" factor wears off quickly once you start seeing them everywhere - and for VW, the reintroduction of the Beetle probably caused as much brand image confusion as it did support. In the States, VW has always been synonymous with "Beetle" and bringing out a new one just helped cement that image. Which makes it easier to understand why the Phaeton was such a flop... Akin to buying a designer gown at K-Mart...
"Marc Stern" wrote on September 23, 2016 - 11:25pm Permalink
Your comments add a layer of richness to my piece. It's great to see how much better things can be when knowledgeable readers provide background.