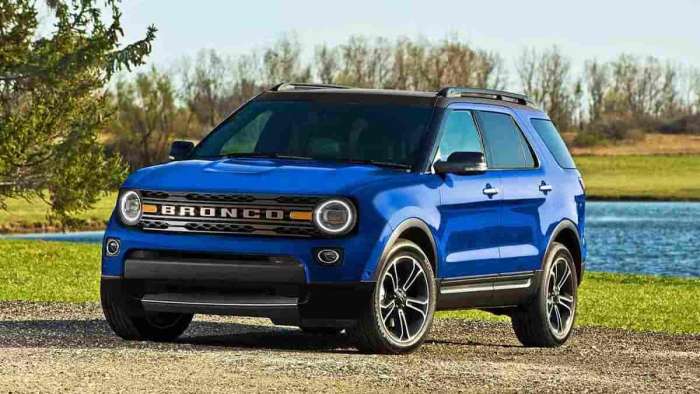 With all of the gloom and doom that has been hitting the auto industry for the last couple of months, it is nice to have something exciting to talk about. In this case, it is a new model that is likely coming from Ford, a pint-sized brawler that slots below the Ranger and is likely to be named the Maverick and share the Ford Bronco Sport platform.
Advertisement

Well, it is a case where this rumor looks like it is half right at this moment. So, which part appears to be true? The small pickup piece, according to several sources that I have read lately on the internet. Indeed, there are some dark spy picks floating around the web that shows a heavily camoed small pickup mule going through its paces.

The part of the rumor that looks like it is amiss is the name of the pickup. Instead of the Courier name – which is entirely acceptable – Ford looks like it is planning to name this particular pickup the Maverick. Now, if you are old enough or you know your Ford history, you would know that the original Maverick was a compact automobile that was solid until the end of the 1970s when it was retired.

Now, though, Ford looks as if it will be reviving the Maverick name, for the automaker's planned mini-pickup. Torque News learned that information from The Fast Lane (TFL), a car and truck tuner whose YouTube channel had more information about the potential pickup.

Indeed, during the last several days, there have been several stories and rising excitement about the name. But, is it real?

According to an "interesting piece of email" that showed up in the TFL's email inbox the other day, the name Maverick seems to be real. The email contained an image of the new mini-pickup's tailgate. In the picture, the name "Maverick" shows plainly across the center. Just above the Maverick name is a cutout for the Blue Oval.

While discussing the name, the TFL spokesman said that there had been a couple of names in consideration for this new pickup. One was, as mentioned, the Courier (a great name, but, one I guess that powers-that-be didn't like) another was the Ranchero. That was the name of the sedan restyled into a pickup by leaving the front bench seat and cab and eliminating the body from the B- and C- pillars while changing the styling into a pickup bed.

It was a conveniently sized pickup because it was still sedan-seized. However, it was a nice pickup. Granted, it wasn't near as robust as the Ford F-150, but the Ranchero wasn't a competitor of the full-sized truck, either. The Ranchero was for people who needed a pickup's convenience and a car's comfort.

With that said, let's look a little more closely at the speculation about the Maverick.

Planned Ford Mini-Truck May Use Bronco Sport Base

This means that two things:

Some speculation had pointed to the Focus as the platform. However, given the email and TFL's thoughts on the subject, it looks like the Focus isn't the base platform.

Indeed, platform sharing makes a lot of sense as Ford's balance sheet doesn't look particularly robust right now. Indeed, the larger Bronco is sharing its platform with Ranger, both of which are body-on-frame construction. Speaking of the Ranger, I recently explored the potentials of computer hacking and the Ranger. Computer Hacking Could Be A Real Possibility.

Sharing platforms not only keeps build costs down, but it also helps to maximize assembly line use because there is no frame-swapping on the line. The only things that change are the parts bolted onto each frame.

Interestingly, TFL speculated that the Maverick would likely be competing with the new Hyundai Santa Cruz pickup, another unit-body pickup, as well as Honda's Ridgeline, the most notable unit-body truck on the market.

The mini-pickup, slated to be built at Ford's Mexican plant, will likely have two powerplants, a 1.5-liter, three-cylinder Ecoboost engine, and a 2.0-liter Ecoboost four-cylinder motor.

Planned Ford Mini-Truck Will Likely be 2022

With the Bronco Sport introduction pushed back about 60 days by the coronavirus, the Maverick will probably be a 2022 model, not 2021. Jimmy Dinsmore has even more news for those who want the next-gen F-150. It will be here sooner than you think. Ford F-150 Production Schedule Leaks