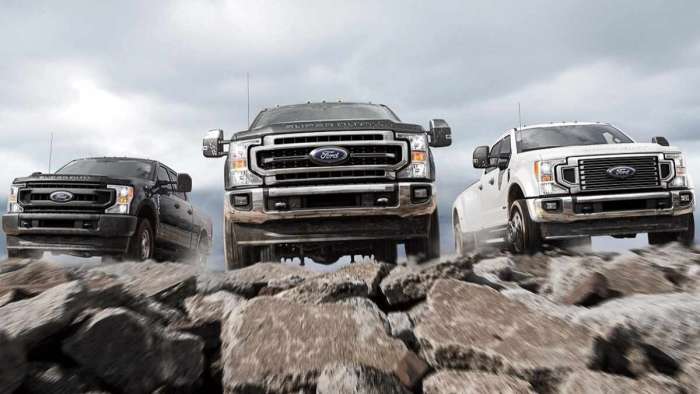 Next Ford Reveal Is The New Super Duty Truck Lineup

To say that Ford has had lots of news lately is putting it mildly. From new uses for Bluetooth to the reveal of the 7th generation Mustang and its exhibition and comments at the recent Detroit Auto Show, the automaker hardly has had time to catch its breath. It continues next week with the reveal of the 2023 Super Duty lineup.
Advertisement

Hard on the heels of Ford's big Mustang reveal last week, which Torque News told you about Ford introduces 7th generation Mustang, Ford plans another major reveal next week with the intro of the new Ford Super Duty.

Reveal Planned For Next Week

According to TFLtruck.com, the automaker plans to reveal the pickup lineup on Sept. 27. And while there is little information available about the Super Duty line, some things are pretty evident from the teasers that Ford has put out so far.

Further, TFLtruck.com notes that the Super Duty line's quad-light design will still be featured, though the front end will likely feature turn signals placed "between the two headlamps on each side."

The front-end design is in keeping with the same styling used on Ford's F-150 lightweight truck. The point of departure is that while the front end features similar items like the daylight running lights, the automaker is "keen to keep the heavy-duty trucks' notorious boxy, no-nonsense look. The headlights themselves, though, seem to be more integrated into the overall grille design.
Trailer Doesn’t Reveal Much More

Looking closely at the clip, TFLtruck didn't see much more other than the Super Duty's lower valence and tires, though the Super Duty logo is prominent on the hood.

Also, "based on earlier spy shots," TFLtruck notes that they "have it on pretty solid authority that the heavier F-450 will return, as well." The site bases some of its speculation on dually prototypes featuring "10-lug wheels, suggesting the F-450 and up models are sticking around."

As to the interior layout, TFLtruck believes that the new Super Duty lineup will take a cue from the new F-150 pickup line. Since the F-150 incorporates a new infotainment screen layout, the Super Duty will likely feature the same style screen layout. It is also possible that the new screen layout will feature "multiple size options."

The heavy-duty series will likely incorporate Ford's updated Sync 4 capability. That may also give the Super Duty line the capability to have over-the-air software updates "at least for certain features," TFLtruck notes.

Powerplant Lineup Could Be Changing

As to the powerplants available in the heavy-duty series, TFLtruck notes that "rumors are swirling about a new gasoline engine to replace the aging 6.2-liter 'Boss' V-8."

And, there is speculation that a "6.8-liter gasser may emerge in the 2023 Super Duty lineup." It adds another "option against the 7.3-liter 'Godzilla.'" Speculating about the exact engine, TFLtruck notes that "it's tough to say at this point." For example, the "old 6.2 puts out 385 horsepower and 430 pounds-feet of torque" while the "Godzilla, for its part, manages 430 horsepower and 475 pounds-feet of torque."

Honestly, there isn't much difference between the two engines "so Ford may focus on fuel economy rather than out-and-out grunt. Ford could split the difference too … though we'll have to wait and see if this engine (the 6.8) turns up at all."

The best advice here is to wait until next week; all these questions and more will be answered with the reveal.

Tesla Contemplates A New Strategy for China Retail even As Sales Boom
Jay Leno on Elon Musk & EVs: “I Think He Should Get ... Credit"
END_OF_DOCUMENT_TOKEN_TO_BE_REPLACED