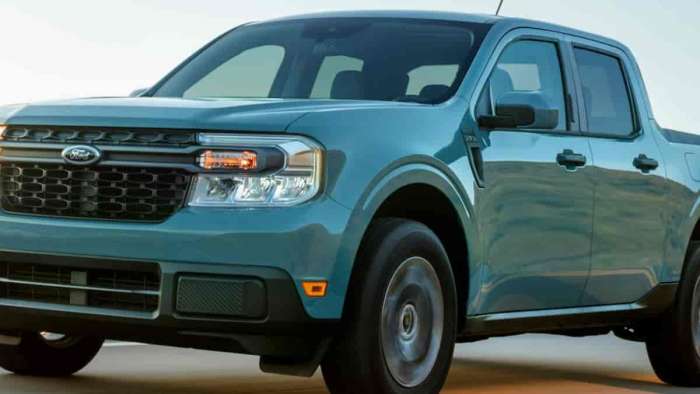 Maverick Gives Ford A Model In A Burgeoning Market Segment

The other day when we were discussing the "standard" Ford Maverick, we noted that it was a "Back to the Future" moment. In the first part of this story, we noted what seemed apparent to us. The marketing and planning folks at Ford looked closely at the pickup market and realized that there was an untapped segment of the pickup market that the automaker was missing. That market was for the compact pickup. Indeed, the "Back to the Future" moment was the realization that there were compact pickups back to the 1960s.

The first part of this article discusses some of the considerations that may have gone into the choice of the Maverick as Ford's compact pickup.

Compact Pickups Were Quite Common

From the early 1960s onward, automakers were producing compacts. The problem was that these vehicles were often based on sedan model frames and weren't up to the rough-and-tumble of pickup life despite general beefing up.

What were some of those early compact pickup models? Vehicles like the Volkswagen pickup, based on the "Rabbit" – the Rabbit morphed into the Golf, come to mind. Or, there was Subaru's "Yama Yagi," a small specialized pickup that eventually disappeared from the lineup. And, there were others, of course. Since they were about the size of larger-sedans, automakers often used an automotive frame. They really couldn't stand up as the constant body flexion quickly loosened things up and made life with these vehicles quite entertaining.

And, don't forget the other compacts out there, like the ones that were half-sedan and half-pickup offered by Chevy and others. They were reasonably robust because they retained most of their body and frame integrity. But, even these vehicles eventually fell victim to the rock-and-roll of the pickup world.

The thing that these vehicles proved – something we didn't discuss in the first story a couple of days ago – was that there was a market for compact pickups. Indeed, the compact pickup market has been pretty much ignored by the auto industry. And, no, we aren't discussing midsized pickups. Indeed, vehicles like the corporate twins from General Motors, Colorado and the Canyon are robust vehicles. And, there's the Honda Ridgeline, which has finally morphed into a pickup. Then there's the Jeep Gladiator, Toyota Tacoma, and Nissan Frontier. Each of these vehicles is a midsized model.

What Makes Up A Midsized Pickup?

What are some of the characteristics of the midsized pickup? They are all about 230 inches in overall length, with wheelbases in the upper 120-inch vicinity to well over 130 inches. The only thing these vehicles have in common with a compact like the Ford Maverick is the width of about 73 inches. The tracks of the midsized are between 65 and 70 inches. And, several of them, like the Ford Ranger, are built using standard truck body-on-frame construction.

Contrast this with the Maverick, basically a front-drive vehicle that uses unitized construction (its body and frame are one unit). The Maverick uses the Ford C2 platform. The Maverick rides on a 121-inch wheelbase and has an overall length of about 200 inches. Its bed is about 4.5-feet. Like its larger compatriots, the Maverick can sit five nicely with more than enough headroom, legroom, shoulder room, and hip room.
Meantime, Senior Reporter John Goreham discusses the latest addition to Ford's Maverick lineup, the Maverick Hybrid

The three-version Maverick is a practical, competent lineup. It has seating-for-five means that it is a SuperCrew-style or four-door pickup with "two-row" seating.

The Maverick is the first Ford with a continuously variable transmission (CVT) offering. The CVT transmission is paired with the automaker's 2.5-liter inline four-cylinder powerplant.

There is another engine option available, Ford's 2.0-liter EcoBoost four. The turbocharged engine mates to and the automaker's eight-speed automatic. The 250-horsepower four turns out 277 pounds-feet of torque.

LG's New EV Battery Plant Is a Welcome News for Tesla
Tesla Giga Berlin's New Hurdle: It's Not Only the Gov't, but Now Tesla Itself
END_OF_DOCUMENT_TOKEN_TO_BE_REPLACED