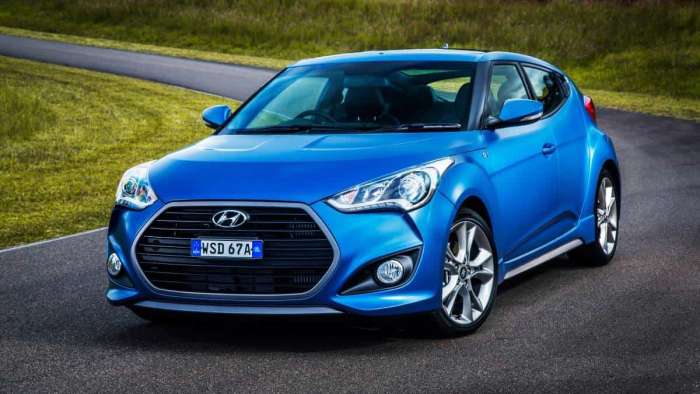 Hyundai's 2019 Veloster, recalled last week for door problem, has now received an Insurance Institute for HIghway Safety Top Pick award. The reason given by the insurance group was that the recall was enough to satisfy IIHS needs so the award was given.
Advertisement

After revealing 2019 Hyundai Veloster door recall last week to fix a problem with the driver’s side door latch, Torque News has learned that the Insurance Institute for Highway Safety (IIHS) has awarded the same vehicle line a Top Safety Pick award. The insurance group made the award to a limited number of models.

The reasoning the insurance safety group gave in its award was that “Hyundai has addressed the issue.” It’s interesting that days after our story disclosing the problem in Torque News, the IIHS revised its decision. So, we wonder, is the problem fixed? Hyundai believes the recall notice addresses the issue, but history shows that many of the recalled vehicles will never have the problem fixed. So, how can anyone know about the state of the repair? If going through the motions counts toward a fix, then it has succeeded beyond all expectations. However, if you need proof that the recall has fixed the problem, you will have to wait until someone or organization queries owners to see if they took the time to have the recalls made.

And, if you look at the specific award, it is for Velosters with specific headlights built after August 2018, not the entire lineup. The recall applied to Velosters built after January 2019. And, while IIHS acknowledged the crashworthiness of the Veloster – its “overall good crashworthiness” – it also freely said that it had uncovered the problem for which the automaker had initiated the recall.

That’s not to say the Hyundai Veloster, redesigned for 2019 after a year out of the lineup, isn’t a good vehicle because it is. It is just that there were likely teething problems with the redesigned Velosters. The issue lies with the Veloster’s with its unusual door configuration. There are two conventionally hinged doors on the passenger side; there’s only one door on the driver side, with different standards.

In the first of two IIHS tests, the driver door snapped open during the crash testing, which could have led to occupant ejection. Hyundai modified the door in models built after January and in a second side crash test, the door remained closed.

“Velosters built before Hyundai began implementing these modifications on the production line must have the recall completed to qualify for the Top Safety Pick award. The recall applies to models built before February,” the safety group said in its notes on the problem.

The Volster earns an acceptable rating for the premium headlines that come with the Turbo, Turbo Ultimate and Turbo R-Spec trims built after August 2019. Earlier models generated excessive glare for oncoming drivers, earning the vehicle a poor rating. The Veloster’s base headlights also earn a poor rating.

In contrast, the Veloster earns superior ratings for its standard and optional front crash prevention systems. Each system avoided collisions in IIHS track tests at 12 mph and 25 mph. However, only the optional system includes a front collision warning component that meets criteria set by the National Highway Traffic Safety Administration (NHTSA).