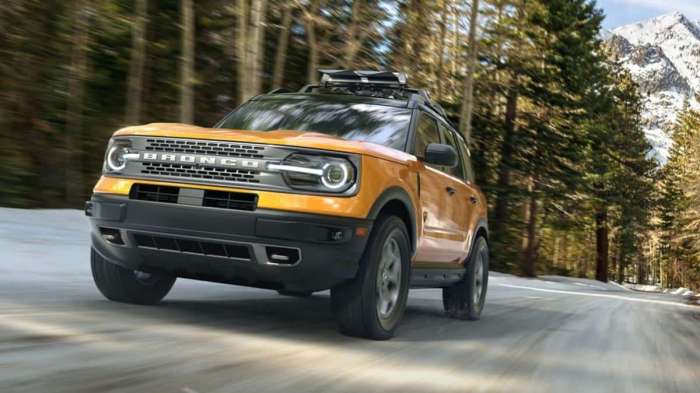 Here's Some Added Information About Touring With Your Crossover

Believe it or not, you can tour with your crossover but the vehicles like smooth road better than the rough-and-tumble of offroad.
Advertisement

I have to admit that my colleague John Gorham does do a great multi-image piece on AWD versus 4X4 and the need for either, but here’s the thing, if you know what you are going to do and aren’t planning a major military assault, you really don’t need much more than 2X4 (front-wheel-drive preferred). Here's my colleague's take on offroading with a crossover.

Why would I disagree with one of the pre-eminent car writers in the business? Maybe it’s because I have been around the car-writing business for more than 50 years and maybe it’s because I have driven every type of vehicle out there multiple times (in some cases 12 or 15 times through a career that continues today and has put me behind the wheel of nearly 5,800 cars – likely a few more – since I began writing about the mechanical beasties).

Let’s look at my reasons for disagreeing (or if you like the analogy, why I decided to toss my shoes into the gears of our publication which makes me a sabot – shoes – teur). First and foremost, all-wheel-drive, which is strictly a branch of the 4X4 movement, is great; there’s no doubt of it if your vehicle is starting up in snow or mud. For anything else, the common types of two-wheel-drive (front or rear) or 2X4 is perfectly fine.

Here’s an example. Let’s say you take said Buick Enclave (mentioned in John’s article) and park it on the flat, head in on a major – and dry – a stretch of a major road. Do you need all-wheel-drive or 4X4 to back out of the space and start-up in traffic again? Nope, nosiree, the more important feature here is the result of technology and it is a backup camera. I don’t how many times I have backed out of a spot in our daily driver as I watched the backup camera. The backup camera in our Ford Fusion has kept me from having major headaches as it has caught vehicles coming into the rear field of view before I do (our’s is manual and doesn’t have any sort of special warning attached, but that’s the way it was in 2015 when our driver was new).

As noted you didn’t need the services of 4X4 or AWD to make it in or out of the space. If it were six months from now – January – and there were three feet of snow on the ground with the white stuff piling up at about at more than an inch an hour, then AWD comes into its own. However, you do have to drive using sense.

As John noted in his piece most of the crossovers on the market that feature AWD have decent ground clearance, eight inches, or a bit more. For the most part, eight inches will keep you out of trouble. Unless – and it’s a bit unless – the snow is coming down faster and harder than you can imagine, and the eight inches of ground clearance is no longer there. Indeed, if you look at your crossover and it looks as if the snow is up the rocker panels, then you know that you will need the AWD to get rolling again.

For the most part, the AWD will work nicely if you remember to use an absolute minimum of pressure on the accelerator. If you just get in, hit the accelerator hard, and expect to move right into traffic, be aware that you will likely just be digging your crossover into the snow, leaving yourself a shoveling job before you can get out.

Even now, if you have parked your crossover in a loose dirt and gravel parking area, the chances are good that you will just be digging yourself into the loosely packed dirt. It is highly unlikely that you will dig your crossover into the parking area, but you may end up more than a bit out of control as you also spray dirt and gravel all over. Like snow, a nice steady, light pressure on the accelerator will get you out nicely.

Let’s say, though, that you have taken your crossover – a Ford Bronco Sport, for example – out into heavier woods where the tracks are deeper. Will the AWD work there? As John shows in his piece, AWD will work in areas where it used to be the gospel that 4X4 was needed. The key difference is how you handle your vehicle.

If you are driving a crossover and trying to do some back-trail bushwhacking, you know that you must keep your eye out for deep ruts that may hide large rock piles that could hole your oil pan. If you run into a problem like that then it’s a good idea to make sure that another vehicle that you might be running with has a winch available because you may have to winch your vehicle out of that situation.

If you don’t have a winch available what can you do? One course of action is backing up so that your crossover is out of immediate danger of major damage. Then, when you are sure of it, you might try driving out of the rutted path gently and slowly. Sure, you may have to take a shovel or an entrenching tool and fill in the track ahead. Perhaps you weren’t aware of the need for the added muscle work but when you think about it, it is the type of work that will keep your vehicle from needed a ramp truck out of the forest, if you could get one in, in the first place.

Here’s something to note and it is simply this: crossovers, while they can and do go out back-trail runs, are much better served by staying on the paved surfaces of Interstates and local routes. It is true that many commercials show your crossover – whatever the model – running on backwoods paths. However, if you look at the trails in the commercials, they are remarkably free of runs and rock piles and other things that can easily break a crossover.

Better that any heavy bushwhacking is done by a pickup that is rigged out for it; perhaps a Bronco or a Ford F-150 with a lift kit that and suspension pieces that would accommodate larger tires and a larger liftover height. Plus, full-sized pickups tend to have such equipment as standard winches which will make things easier.

So, what is our conclusion? At least from this writer’s standpoint:

Tsingshan's Threat to Tesla: EV Maker Is In Battery Crosshairs
Tesla-Funded Research Reveals One of The Biggest Mysteries of EV Battery
END_OF_DOCUMENT_TOKEN_TO_BE_REPLACED