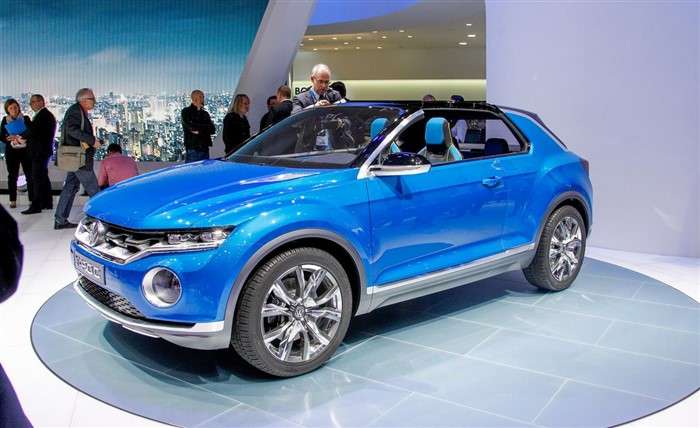 Here’s Another Model The U.S. May Not See, The VW T-Roc

Though Volkswagen is planning a strong push for the T-Roc crossover in most of the world, it looks as if it is another nice model that may just not make it across the pond to the U.S.
Advertisement

Sometimes you have to wonder why Europe seems to get more fun stuff than the United States. Could it be because their taste leans more toward designs that are more than traditional? Could it be because the U.S. is too hidebound and conservative to accept something new and edgy? Honestly, I don’t have the foggiest clue as to why the good ones stay in Europe, never leaping across the pond.

No U.S. Sales Plans, Yet, Anyway

Here’s one that we’re not getting, at least not yet, anyway, the VW T-Roc. For months, there have been teasers about the T-Roc. First, there were concept vehicles that looked strangely like the T-Roc, appearing on displays at car shows like Frankfurt, Geneva and elsewhere and then there were the press releases discussing the possibilities of T-Roc. Early News About T-Roc Crossover.

That was only the first round. Later rounds – and appearances at other shows on the car show circuit – built a sense of anticipation around the T-Roc, as if it was going to imminent for worldwide distribution.

And, now comes the real news that T-Roc, VW’s compact crossover – Crossover Utility Vehicle or (CUV as VW’s literature identifies it) – that T-Roc will have its media debut later this month and its official public showing at Frankfurt next month in Germany. And, the U.S. will be left like kids staring across a pond at a bunch of toys, but unable to grab them, own them or use them because they are on the other side of the pond where they will stay. At Least Some Are Lucky Enough To Drive T-Roc.

Okay, so it is VW’s plan to do this, but, since the U.S. is one of the biggest crossover markets in the world, one is left wondering why a vehicle that is slated to be a core volume model for the automaker won’t be available here. And there’s another T- model coming, the T-Roc’s smaller cousin the T-Cross. Both models are for the booming compact crossover market. T-Cross will be available sometime next year.

“It will be Volkswagen’s first true lifestyle CUV … packed with highly innovative digital features and the latest driving assistance systems,” Juergen Stackmann, VW brand sales, and marketing chief told reporters in a conference call. “The T-Roc will be a very important model for the Volkswagen brand covering the SUV segment below the Tiguan.”

A very-excited Stackmann noted that VW is in “a very early phase of the Atlas/Teremont (VW just had to have its T-lettered version) launch – it was launched in May of this year – and the initial reaction is just outstanding. We are almost sold out of stock of the car at our dealers already, with high demand and high specification levels. The customers are really shooting for very much loaded cars.”

Herbert Dieess, VW brand chief exec, said a couple of months ago, that VW has seven new SUV and crossover launches going forward through the end of next year. “The T-Roc, in particular, will contribute to an increase in volumes and earnings,” he said.

As it is, T-Roc is slated to be a core volume model as VW grows the number of crossovers and SUVs offered over the next few years. T-Cross, its smaller sibling, is expected to be another key model in the booming subcompact crossover segment next year. Along with a projected 25 percent gain in German productivity and a planned return to profitability in VW’s loss-making regions by 2020, the SUV launch – seven in the next few years – is seen as a pillar of the automaker’s plan to have a four percent operating margin in three years.

Though T-Roc continues an SUV offensive that began in the first half of this year, the sales push in China, the VW’s largest market that accounts for about half its sales, VW has launched other models; the long-wheelbase (three-row mid-sized crossover) Tiguan and Teremont. The long-wheelbase Tiguan is locally built, while Teremont (the U.S. Atlas) has already proven successful with 5,329 sales. China is a major Teremont market.

Last month, VW replaced the short-wheelbase Tiguan with the long Tiguan, a model that offers room for seven, with its third row of seats. The long Tiguan is set for sale in Europe as the Tiguan Allspace. Plans call for sales of the Allspace alongside the standard Tiguan. VW has opened orders for the Allspace in Europe. Prices start about $30,975 for the base model. A 148-horsepower, 1.4-liter gas engine powers the base model.

The Tiguan Allspace is 215 mm longer, at 4,700 mm than the standard Tiguan. Allspace offers not only more interior cabin space, thanks to the longer wheelbase. It also features the top-line “Discover Pro” infotainment system.

According to a VW spokesman, T-Roc sales are not planned in the U.S. now. However, the company will watch the development of small SUVs there. China will give a locally built model next year, said the spokesman. It will be a long-wheelbase model.

Ebert wrote on August 8, 2017 - 9:15am Permalink
As far as I know, one of the reasons why VW is going to produce the T-Roc is because they are going to sell it in the U.S., the largest automotive market in the world. And the name of the Atlas SUV outside the U.S. is Terramont, no Teremont.
Marek Wojciech ... wrote on August 16, 2017 - 7:01pm Permalink
No TDI, no Polo, and now, no T-Roc. It looks like VW is trying hard to lose lifelong customers in the States.

LG's New EV Battery Plant Is a Welcome News for Tesla
Tesla Giga Berlin's New Hurdle: It's Not Only the Gov't, but Now Tesla Itself
END_OF_DOCUMENT_TOKEN_TO_BE_REPLACED