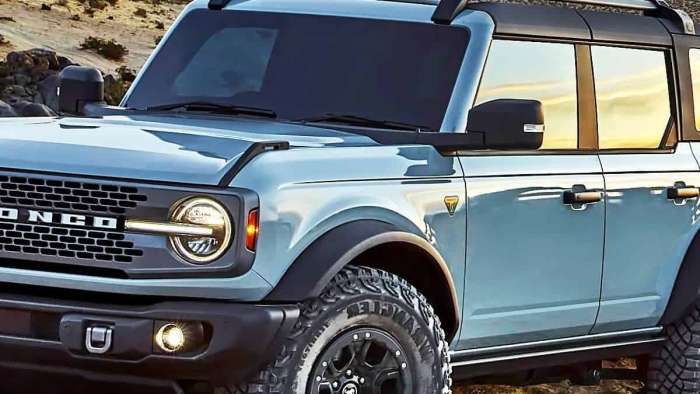 Although the Ford Bronco Four-Door -- full-sized -- is one of the success stories of the auto year, one area where it has not lived up to the successful story line is in the ratings from the Insurance Institute for Highway Safety where issues with the head restraints and headlights kept the popular model from earning an IIHS award.
Advertisement

For more than two decades, the Insurance Institute for Highway Safety (IIHS) has conducted a comprehensive vehicle rating program that has become one of the standards of the automotive world.

Since it began rating vehicles, IIHS has continually developed tests that rate the capabilities of vehicles currently sold in the United States. IIHS is an independent safety group dedicated to making vehicles safer. Since that is its mission, it is little wonder that the group publishes its safety ratings.

To say they don't play favorites is an understatement. With the popularity of Ford's new Bronco, one would think that the SUV would meet the group's safety standards hands-down, but they don't. While the Bronco Four-Door doesn't meet the IIHS ratings, it does pass another test, sustainability as the automaker looks to the ocean's giant trash heap for some of its parts.

Indeed, when the IIHS released its assessment of the 2021 Bronco four-door – one of the two full-sized models, the other is the two-door – the safety group noted that while the SUV did well in most of the group's testing categories, it did not earn one of the safety group's awards due to two issues:

When IIHS evaluates a vehicle, it looks at two major aspects of automotive safety: crashworthiness and crash avoidance/mitigation. As part of the crashworthiness aspect of its ratings, the safety group looks at six specific tests:

The SUV earned a Good rating in five crashworthiness tests in the Bronco ratings. However, it received an Acceptable rating in the head restraint requirement. IIHS notes the SUV's headrests meet its criteria for geometry but come up short when providing enough support for an occupant if the vehicle is hit from behind by a similar weight vehicle going 20 mph.

Interestingly, the Bronco meets the IIHS criteria for crash avoidance and mitigation with Superior and Advanced ratings in the vehicle-to-vehicle and vehicle-to-pedestrian tests.

Interestingly, the other Bronco model, the Bronco Sport, did very well in the IIHS tests, earning a Top Safety Pick+ rating in the Small SUV category.