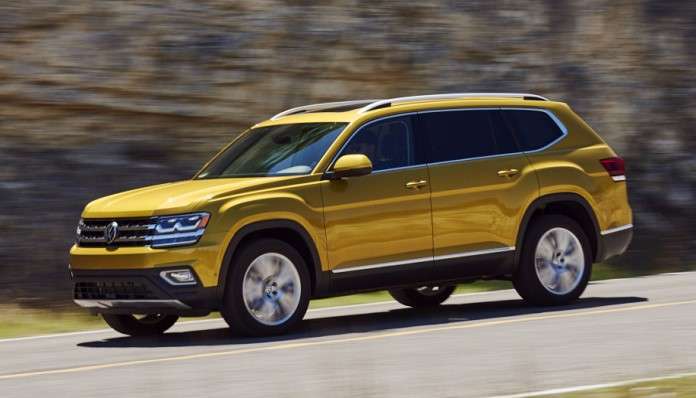 Has Volkswagen been hinting at an expanded Atlas lineup? It is very possible

Volkswagen, whose Atlas SUV has been a strong seller in its first seven months on the market, may be expanding the line. The automaker has trademarked a couple of interesting name and there have been hints that a sporty five-seat version in the offing, as well as an off-roading version.
Advertisement

Following last week’s introduction of the second generation of the Volkswagen Jetta, some interesting rumors have been making the rounds dealing with the VW Atlas, the three-row crossover that went on sales last July.

Atlas sales have been a strong point

Suffice it to say, the Atlas has been an active seller, although, of course, not in the same league as others in the same category. Since sales began last summer, VW dealers have moved about 21,000 copies of the SUV, and while it isn’t up there with the likes of the Honda Pilot or Toyota’s Highlander, it is in a real battle with BMW’s X5 and Caddy’s XT5, among others, and doing well.

At the time of the Jetta frolics, Hinrich Woebcken let it slip to Autoblog that there may be plans in the works for a full family of Atlas-based vehicles. Woebcken is chief exec of the VW’s North American region. He hinted that the new family of SUVs might include a volume-selling entry. Atlas draws rave reviews.

Also, other hints point to the possibility of a sportier version of the sleekly square Atlas, perhaps a five-seater. There could also be an off-roader in the works, as well. Autoblog reminded that Woebcken, in a chat with reporters at the New York Auto Show, earlier this year, that VW is working on the five-seater, though he didn’t give much more information at that time. He also noted that plans for the new SUV are moving along.

Volkswagen on a trademarking tear

One other question that popped up followed VW’s trademark application for the name Apollo. This isn’t the first time the automaker has used the moniker. VW used the name on a small, two-door made there some years ago. Woebcken has been pushing for a Tiguan-based five-seater for the U.S. market. It stands to reason that the mid-sized crossover line could be expanding and Apollo could be its name.