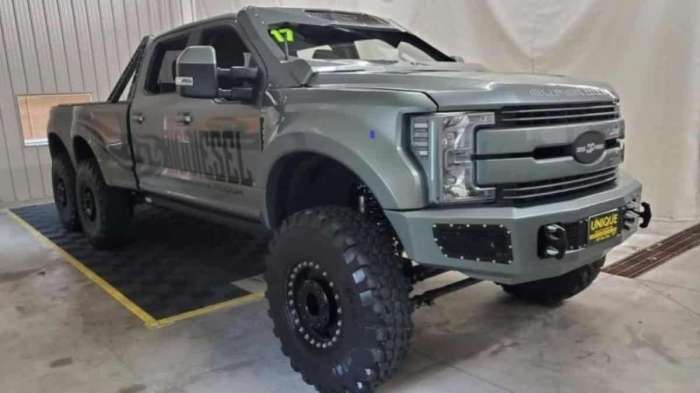 In a line from a famous old show, we have Superman being able to "leap tall buildings in a single bound." And, now, we have a 6X6 Ford F550 truck conversion that may be able to do the same thing.
Advertisement

In the faster-than-a-speeding-bullet department, we roll up to the Ford F550 called the “Indomitus.” Like its name, the “Indomitus” can’t be deterred by very much. Is there a hill in the way? The “Indomitus” will storm and take it without much help from any other vehicle. Or, is there an especially tough stretch of offroad real estate that is hanging up other all-wheel-drive vehicles? The six-wheeled SUV will sweep on through the obstacles as if they are not there.

This Is Not You Average Converted Ford F550

As you might have guessed by now, “Indomitus” is not your average 6X6 heavy duty SUV. No, it is much more than just a dualie with pretensions of tank-hood. As its name implies, “Indomitus” isn’t stopped by much. Remember the 6X6 that had trouble when it tried negotiating a small bump in the road a couple of weeks ago? If you don’t, that particular 6X6 made it about halfway up small bump in the roadway when it stalled out with the rear wheel spinning away, smoking. The rear wheels were, due to the angle, hard against the middle axle, apparently preventing the center axle from moving.

And, while we don’t know if “Indomitus” ever tried to negotiate the same stretch of roadway that tied up the other 6X6, we have it on pretty good authority that “Indomitus” probably would quickly blow by the hillock with no trouble.

“Indomitus” began life as a very stock 2017 Ford Super Duty F550. The F550 is a Class 7/8 truck. Part of Ford’s Super Duty series of heavy-duty trucks, the F550 is usually sold as a chassis onto which some sort of body is grafted, such as a cargo box or a towing rig or flatbed or something similar.

If “Indomitus” seems familiar to you, it should be. It was the “star” of the Discovery Channel show Diesel Brothers. During that season, the Diesel Brothers grafted on an active rear axle so that the 4X4 became a 6X6 truck. Indeed, the second driving axle was this truck’s superpower.

Watch for news about Ford trucks here. You will also receive information about planned changes to the Ford F150 and other Ford F-Series trucks. Click To Subscribe To Torque News YouTube Channel For Daily Ford and Automotive Industry News Analysis.

Powered by a Ford Power Stroke 6.7-liter turbodiesel engine, there’s plenty of torque available as “Indomitus” cranks out 440-horsepower and a considerable amount of torque. In the Diesel Brothers transformation, they used top-quality parts. For instance, the F550 features Rough Stuff suspension parts, among other manufacturers. The suspension changes made also included a ReadyLift seven-inch suspension lift kit. The ReadyLift lift kit meant that the 40-inch wheels now installed on the F550 received enough clearance so they could roll easily.

“Indomitus” exterior color is Giverny Green, a custom PPG blend that looks, at times, either silver or gray, certainly not green. “Indomitus” is dressed in custom rear fiberglass fenders, and it sports a ViCal visor made by Fab Fours. Everything, well almost everything, is stock on this conversion. One specialty item is the 10-foot pickup bed. The bed, by the way, has a custom headache rack installed. The front and rear bumpers are from Flog.

The Conversion Stickers Are Easily Removable

Initially made for the Minnesota Soybean Research Council, “Indomitus” is covered in stickers that celebrate soybeans and biodiesel. If you are in the market for a very special 6X6, you should know that “Indomitus” has an asking price of $145,000. And, should you have the money available to pick up the conversion, we were informed that the stickers are vinyl, press-on and apply and they are easily removable.

Source: The source of this article is The Ford Forum, one of the leading providers of news and information about Ford vehicles.

Tsingshan's Threat to Tesla: EV Maker Is In Battery Crosshairs
Tesla-Funded Research Reveals One of The Biggest Mysteries of EV Battery
END_OF_DOCUMENT_TOKEN_TO_BE_REPLACED