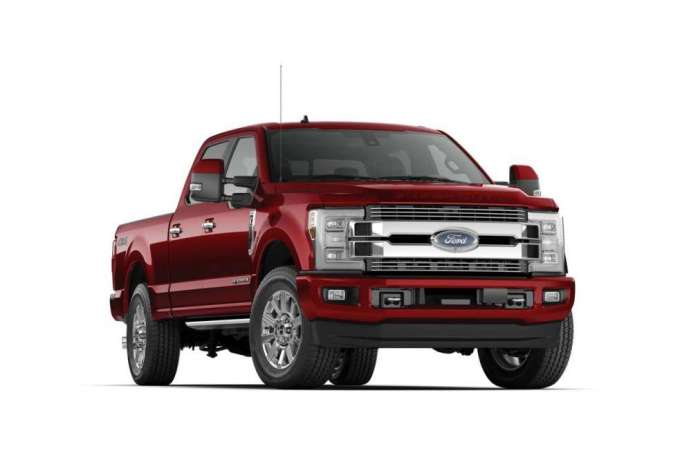 Ford is facing a new lawsuit over the valve stems in its F350 Super Duty trucks. The suit claims the tires lose pressure, sometimes daily, and require constant refilling.
Advertisement

A pair of Ford F350 Super Duty owners have filed suit against the manufacturer over aluminum wheels that always lose air pressure due to issues with valve stem leaks. The owners claim that the low-air pressure affects fuel economy, handling, tire condition, and safety.

Lawsuit Claims Tires May Blow Out

Further, the lawsuit claims that the tires may blow out; and, the action claims that there is added danger if the trucks are hauling heavy loads. The suit says the issue involves the 2017-18 Ford F350 trucks.

The lawsuit was filed by a pair of truck owners. It also includes all F350 variants such as the:

One of the plaintiffs in the suit, James Collins, owner of a 2018 Ford F350 Lariat DRW, claims he has to refill the tires sometimes daily due to the leakage. He claimed in the suit that he had taken his truck to a Ford dealership many times for repair. The repairs included replacement of the TMPS (tire monitoring pressure sensors), wheel replacement, and valve stem replacement.

He further stated that none of the fixes did any good. He also said that he eventually hired a mechanic to replace the factory steel valve stems with rubber units. Collins claims that the aluminum wheels on his F350 truck have become discolored and corroded from the original and replacement valve stems.

The second plaintiff in the suit, Ken Newman, owner of a 2018 Ford F350 DRW XL, also complained that the tires on his truck have to be refilled frequently due to the valve stem leaks.

Newman claims that he had to return to the dealership many times. According to the suit, the owner claimed the dealership informed him the warranty would not cover the truck’s wheels.

The central issue, the lawsuit claims, is the contact between the aluminum wheels and steel valve stems, which, the action alleges, has caused the corrosion at the contact site.

The pair of claimants brought suit in the U.S. Court for the District of Delaware.

The tire pressure suit is one of several actions that have been brought against Ford. One of the most significant lawsuits against Ford involves the DPS6 transmission that has been used on several car lines.

Sources: Author research; The Ford Authority which is one of the leading independent sources of news and information about the automaker.

SANDRA CARVER wrote on September 1, 2021 - 9:41am Permalink
owner of F350. Under 36,000 miles. Over 3 years. Ford will not replace the wheels. They offered for us to pay about 850 to replace
ivy wrote on January 20, 2022 - 3:03pm Permalink
How do you all get this problem fixed?
James Campbell wrote on November 16, 2021 - 3:15pm Permalink
I have a 2020 F350 which has been leaking from valve stem sense about 8000 miles. I know 2 valve stems leaking at 11000 miles. We’ll be making appointment shortly.
Bill Dougherty wrote on December 23, 2021 - 4:06pm Permalink
I have a 2017 F350 Super Duty dually. Same leaky problem. My left front needs to be refilled daily. Come on Ford, stand up and do the right thing.
Larry L Bates wrote on January 11, 2022 - 12:15pm Permalink
I have a 2017 Ford 350 Dually . Bought it brand new. Rims started leaking at the stems just a few months after I bought it.. They paid to replace all 4 rims with the same type of rim and they still leaked. The dealership talked me into rubber stems. They still leak. Have to fill tires up every time I drive it. Contacted Ford Motor Company and they said the warranty is over and they can't do anything about it. I told them this has to do with a safety issue with factory Ford rims that they put on the truck from the factory not a warranty issue that runs out and there should be a recall on those rims. Looks like they won't do anything about it till a stem blows going down the road and someone gets killed over this. But they probably still won't do anything. The fight goes on
Teresa wrote on February 1, 2022 - 1:59pm Permalink
I have a 2018 F3 50 Dooley with the same issues with the wheels. They were replaced when the truck was about a year old at no cost to us by the dealership. We are now having the same issues with the new replacements. Ford has offered to replace them with the exact same wheels with our out-of-pocket cost $2350. I’m sure within the year we will be faced with the exact same issue once again, when you pay over $74,000 for a new truck you shouldn’t have to deal with issues such as this. This is definitely a safety issue and Ford needs to step up to the plate if they want to keep repeat customers.
Woody wrote on February 23, 2022 - 6:41pm Permalink
I have written to Ford myself, as a matter of fact, to William Clay Ford directly, and never even got a form letter of response, and yes, this was over a 2020 Ford F350 dually. The apathy at Ford goes from the assembly line, right up to the front offices. Once they've got your money, they really don't care about customer service and if your vehicle works or not. My vehicle has less than 9000 miles on it, and all of the sensors are saying that all 6 tires are low and under inflated. The only way to hurt this apathetic company, is to hit them in the pocket book. Boycott buying Ford products. If they don't want to fix their products, let's we, fix Ford!!! So much for loyalty to a certain company and a certain product.
TS F350DRW wrote on April 12, 2022 - 3:15pm Permalink
Sitting at the dealership right now having 3 new valve stems put on that I get to pay for. Was having to air up daily. 2019 F350 DRW... come on Ford! Do the right thing
Debbie wrote on May 3, 2022 - 12:57pm Permalink
I have a 2017 F350DRW. I have had this issue since a couple of weeks after getting my truck home. Ford has replaced the valve stems many times now on all of the wheels. They also replaced the wheels on 4 out of the 6 tires. I am still having to fill my tires constantly. I worry every time I haul my horses somewhere. I do NOT feel safe. The last time I was in the dealership they kept my truck for a few days and when they told me to come get it, they said they can't seem to find any replacement valve stems. That has been a few months ago and when I call they still can't find replacements. Ford has NONE in stock. If they don't do something soon I will NEVER purchase another FORD product.
Michael Baker wrote on December 27, 2022 - 12:12pm Permalink
I have a 2017 F350 Dooley. I’ve had the same problems ever since I’ve on the truck and now it’s almost 2023 and I have another sensor leaking. Any idea what I can do? Thanks. Mike