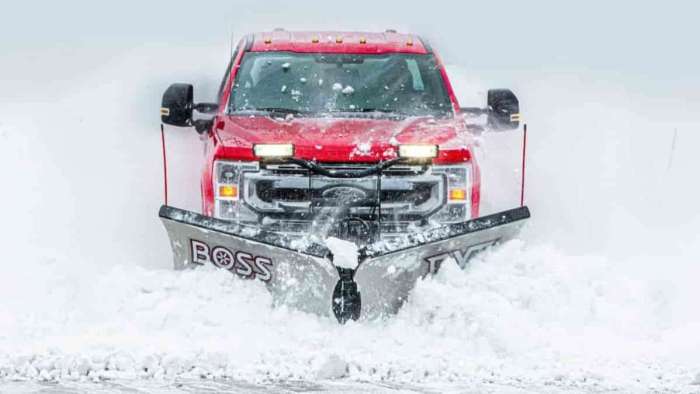 The Ford F-Series Super Duty pickup line already has best-in-class towing ratings and it has added to those numbers with best-in-class plowing figures, as well.
Advertisement

Let’s face it; so far, this winter life hasn’t been easy if you live anywhere that has been hit by the 10 or so winter storms that have run from coast to coast as if they were on train tracks. In some places, the snow has fallen so deep and fast that lightweight plow trucks usually can’t keep up. So, what do you do in this situation? If it’s your space, you measure your options and then act.

You can hire a contractor with a bigger duty truck than your plow vehicle. Or, you can contract with a company that uses a front-end loader to come in and clean things up quickly. In either case, when the contractor is gone, you may be left with still-falling snow and space rapidly covered and filling with snow. You are back where you started. What would happen if, instead of hiring a contractor, you picked up a Ford F-Series Super Duty model to take care of business? Indeed, for a couple of reasons, it makes sense.

First, if the space you own and are plowing is part of your business, you would be able to use the truck as an investment in your own business, and it might help cut your tax load. And, second, even if you are using the Super Duty to plow a space owned by another party, you can still use the pickup as an investment and that can help your bottom line at tax time, as well.

One truck series that is worth not only a first look, but also a second and third is the Ford F-Series Super Duty series of trucks made by Ford at its truck plants in Louisville, Ky., and Avon Lake, Ohio. The Ford F-Series Super Duty models – F-250/F-350 – can take care of the winter’s worst weather easily. The Super Duty trucks feature best-in-class plow ratings for the gasoline and diesel engine segments. Ford Super Duty pickups are not the only trucks with special models available as I found when I checked out the 2020 Ford F-150 Police Responder Package.

Mike Pruitt, Ford F-Series Super Duty chief engineer, put it this way. “With our new Super Plow Prep Package, we’re really delivering for folks who clear the way after a big storm. Being able to hook up bigger plows means roads, driveways, and parking lots are cleared quickly, and drivers can move on to the next job.” He continued that “Super Duty is a real workhorse in the snow-removal industry.”

The Snow Plow Prep Package is available on 4X4 pickups. The package includes heavy-duty springs specific to each truck configuration and an up-rated alternator to deal with heavy electrical loads. There is a Plow Prep Packages available for gas-engined models and diesel-equipped Ford F-Series Super Duties. The gas engine package has a maximum 1,400-pound snow plow rating, accounting for mounting hardware. The diesel version has a maximum of 1,290 pounds. Both are best-in-class.

A study, conducted by the Snow and Ice Management Association (SIMA) and Wolfworx/Singer Consulting, notes that moving the white stuff is big business. It is the study notes, an $18 billion industry in the U.S. The snow-removal sector is growing at a rate of about three percent a year. More than 22,000 commercial contractors and 75,000 sole proprietors are part of this growing segment. According to a 2019 SIMA survey, the Ford F-Series Super Duty pickups account for nearly 50 percent of market share in an industry that values reliability, the service network, and rated plow weight.

Owners will likely appreciate new features such as a windshield wiper de-icer that pre-heats the windshield under the wipers to keep the blades free of ice, an available heated steering wheel, and heated seats front and rear. Deep Snow/Sand drive mode is available on models equipped with the all-new 10-speed heavy-duty TorqShift® automatic transmission. The unique drive mode changes throttle mapping and traction control settings to allow for added control and greater confidence in snowy or slick conditions.

Tesla Giga Berlin's New Hurdle: It's Not Only the Gov't, but Now Tesla Itself
Teslas Are Sold Out Until 2023, But The Timing May Reverse
END_OF_DOCUMENT_TOKEN_TO_BE_REPLACED