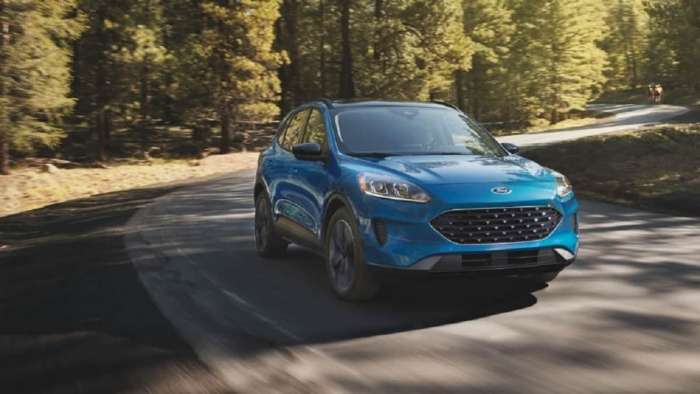 Capping a major week of recalls, Ford has recalled about 3 million vehicles to fix a problem with its gearshift. Owners of the recalled vehicles may find themselves with vehicles that roll when they were not supposed to even though the vehicle was in Park. The culprit is the shifter cable and bushing. This is not the first time this issue has arisen.
Advertisement

The last week hasn't been great for Ford as two recalls have been making headlines.

The first was a potential recall of nearly 50,000 Mustang Mach-E electrics, the automaker's popular battery hauler. As noted in a story in Torque News, this is the fifth major recall of the Mach-E, which had some early teething problems but has been successfully on sale for months.

The second even more-major recall that rocked the automaker was Ford recalling about 3 million vehicles. The automaker has recalled the vehicles because of problems with the shifter. It seems that when one of the affected vehicles is shifted into Park, it can still roll.

As we have detailed several times on Torque News, the culprit is a problem with the Park mechanism. Usually, when you shift a vehicle into Park, a bushing part of the shifter cable engages a pawl that locks into the driveshaft and keeps the vehicle from rolling. It is pretty practical, as many have when they shift too quickly into Park, even as the wheels were still moving. At that time, the vehicle will stop quite violently, usually rocking back and forth. The piece affected by the recall connects the shifter to the transmission so that the transmission will shift into Park.

With the recall, though, Ford has filed paperwork with the National Highway Traffic Safety Administration (NHTSA) that expands an already-existing recall effort. As detailed here in Torque News, the potential defect lies in a malfunctioning part – the bushing – that connects the shifter cable to the transmission.

Ford notified the NHTSA last week that it had expanded the recall to 3 million vehicles because it is possible for the vehicle to roll into traffic even though it has been put into Park by the operator. The issue is that the driver doesn't know that Park has not been engaged, and the vehicle can roll. Ford indicated last week that it is aware of four injuries that may be linked to this condition.

The vehicles recalled include:

In a letter to the company, the National Highway Traffic Safety Administration cited the risk of an "unintentional rollaway." The problem can also cause the vehicle "to move in an unexpected direction." According to MSN Auto News, in its filing with NHTSA, the automaker said in its filing with the safety agency. "The driver does not receive a warning message or audible chime." The filing continued that the driver is left without knowing whether the vehicle is in Park or not. If the vehicle is parked without the transmission being set to Park and without the parking brake set, the vehicle could keep moving, "increasing the risk of injury or crash," Ford told the agency.

Things Drivers Should Look For

And according to MSN Auto News, there are other telltales besides the Park issue. For example, Ford said, "the driver may also notice the defect if they attempt to shift to an intended gear and the vehicle responds differently than intended."

Ford said it knows of four potential injuries related to this problem. According to the Detroit News, there have also been six reports of damage caused by this issue. The recalls follow information the automaker received that it was "not previously aware of," said Ford. The carmaker was spurred to action when its own "' analysis found a change in the consumer complaint data that moved it to take further action.'"

Ford told the Detroit News, "projected failures remained low, but it decided to recall the vehicles that [may] have the affected part." The automaker has estimated that only one percent of the 3 million vehicles may have the defect, the Detroit News said. Indeed, the carmaker is still hunting for the cause. "Root cause is unknown. Based on Ford's investigation, "heat and humidity can potentially contribute to the hydrological breakdown of the bushing material."

Ford plans to notify owners in July of this issue. Once they are notified, owners can take their vehicles to their dealer for a fix that involves replacing the cable and bushing and installing a protective cap.

This is not the time that Ford has acted on this issue. Last year, the automaker recalled 192,000 Transit Connect vans for the issue.

Chuck Davis wrote on June 21, 2022 - 4:54pm Permalink
Wouldn’t you think Ford could figure out what the problem is with the faulty shifter, it’s only been a problem since the mid-sixties.