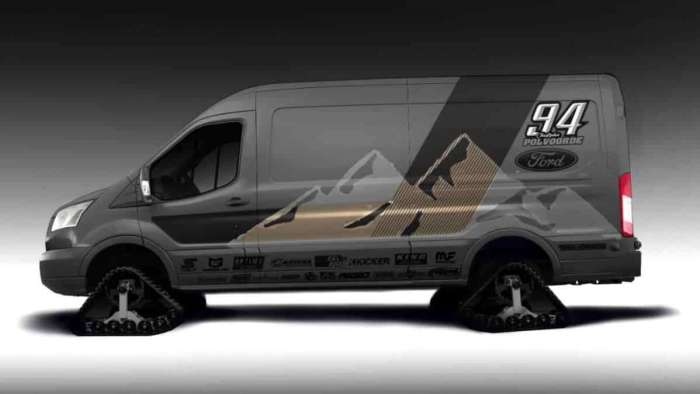 It took an offroad racer with some definite ideas about tread design, backed up by the Ford Motor Co. to come up with this customized Ford Transit Van with tracks. Not quite ready for U.S. roads yet, we'd still like one for Christmas.
Advertisement

The guys in Ford development have been having a ball of late as they release their latest concept creations for this year’s Specialty Equipment Manufacturers Show (SEMA) in Las Vegas. Torque News, earlier this week, described one of their Ranger creations, the Yakima Ford Ranger, and today we’ll look at a Ford Transit van customized into, of all things, a mini-tank.

Treads Ensure You Can Go Way Off Road

That’s right; it’s a Transit van that is meant to go off the grid, as in way off, and to facilitate that trip, it rides on tank treads. The mind behind this particular vehicle is offroad racer Christoper Polvoorde, who designed it as a specialty vehicle for an active lifestyle. Not only was the Transit van intended to get over any object (tank treads are pretty good at that), but it also was designed to serve in several roles as well. It is “part home; part garage, and part hangout,” said The Ford Authority in an article about the custom-designed van.

Let’s look a bit more closely at the customized Ford Transit. The van accommodates up to four people. The customization extends to a water system, a heating system, its air conditioning, and there is also a provision for solar power.

Watch for news about Ford trucks and vans here. You will also receive information about planned changes to the Ford F150, and other Ford F-Series trucks, as well as Ford Rangers and truck-based vans and SUVs. Click To Subscribe To Torque News YouTube Channel For Daily Ford and Automotive Industry News Analysis.

Built with a bulkhead for storage and other things, there is space for mountain bike mounts, as well as snowboard and paddleboard racks, kayak mounts, fishing pole storage, and a boot/glove heater for days when the frost is on the windshield.

Ford Transit Van Is Not Stripped Down

As you can already tell, this is not some stripped-down, barebones version of a Transit van that is meant only for hardy outdoors people or survivalists as it has many amenities to keep you happy such as an upgraded Kicker stereo system, a Rigid LED lighting set up that puts lots of light where you need it. And, for those days when you decide to stay in one spot, while you are in the bush as the sun beating down, you can swing out the side awning for some welcome shade. Also, if you should find yourself unable to go forward, backward, or any other ways “ward,” you will find the designer thoughtfully put a Warn winch set-up behind a custom off-road front bumper.

This Transit customization is large. It had to be so that everything had enough space. For instance, there had to be room for the bike storage, as well as the water and heating/air conditioning components. It is quite a tall order to shoehorn everything, plus sleeping accommodations for four, into the customization. The developers did this quite well.

And, while we have seen vehicles with their wheels replaced by tank treads in some recent apocalyptic movies, this is one of the first we have seen in public with tank treads where the wheels should be.

After Some Quick Research, No Standard

We did do some quick research with the Federal Motor Vehicle Safety Standards, and couldn’t find anything that remotely looks like approval for tank treads, so we have had to conclude the treads, though they may work, are just for show. Anyway, who cares about whether there is a safety standard for the tank treads, they look way cool.

Source: The Ford Authority is one of the leading independent authorities on information about Ford products. They cover any vehicles with the Blue Oval logo.