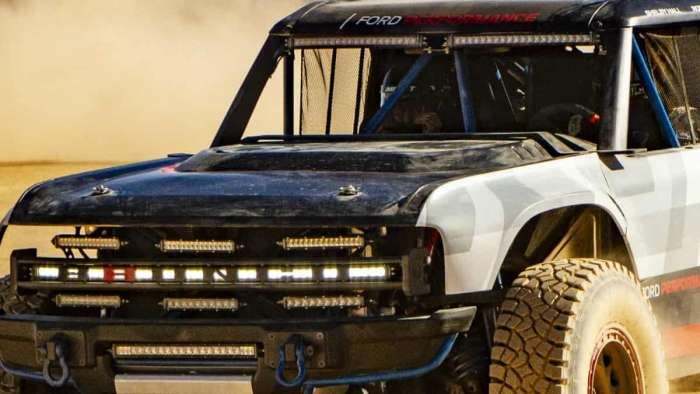 After charging hard through the first half of its race last year, Ford's Baja 1000 racer came up short as course-caused damage knocked it out of contention.
Advertisement

Way back, as in WAY BACK, Ford's Bronco won the first Baja 1000. It was quite a victory. The victory set Ford up as the goto company for SUVs for a long time. Yes, there was the competition as in Jeep and International, whose CJ and Scout, competed head-to-head with the original Bronco.

To be sure, there were differences as in rear-wheel-drive as standard, versus 4X4 and as in two-door versus four-door. The competition was intense, with Ford winning much of the early going. Indeed, Bronco set the standard for years, until the mid-90s when Ford halted production on that version. It's back again (Bronco), in a big way.

Most noticeably, the Bronco is the complete retro model. If you look at today's Bronco, you should find something interesting. It is a modern yet retro truck. Indeed the models introduced about three weeks ago look as if they could have rolled right out of 1967. About the only noticeable change is that the vertical body parts have nicely rounded edges.

Interestingly, Ford is marketing the Bronco as a brand as well as vehicles. Like the Mustang with which the manufacturer set a precedent earlier this year, the Bronco is a distinct brand. Since it is a brand, it likely that it will grow. Right now, test mules are running around Dearborn that are pickup versions of the current Bronco.

With that said, another Bronco is getting ready for its new assault on the Baja 1000 off-road race. Like the original Broncol that took the first Baja 1000 half-a-century ago, this one is ready for the rough-and-tumble of the trackless route to southern Baja California. Bronco R's original purpose was to race in the 50th Anniversary off-road-race. Unfortunately, the Bronco R made it only about halfway before mechanical woes put the letters DNF (Did Not Finish) on the effort.

Now, the team that drove the Bronco R about halfway through last year's race is getting it ready for this year's run. And, though the Bronco R had hoped to win the 50th Anniversary, the fact that it is running is important enough.

For example, the Bronco R does have a rather large roll cage to protect the driver and the navigator who will be competing in the Baja 1000 in November. The Bronco R employs composite body panels. Unlike standard body panels which may not hold up well given the beating they take, composites take the beating easily. Remember, the Bronco R will be moving through a course made up of unmarked trails that are the only way for a competitive vehicle like the Bronco R to make its way to the finish line.

The Ford engineering team turned to Fox suspension pieces to handle the ups-and-downs, as well as the ins-and-outs of the trackless Baja 1000. For example, Fox suspension the engineers chose can easily handle the bumps and jumps each competitor is required to handle. With up to 18 inches of travel in the rear and 14 inches in the front, the Bronco R should handle the course quite easily.

The Bronco R's powerplant is Ford's EcoBoost 2.7-liter V-6. It is a twin-turbo unit that drives a 10-speed automatic shift-on-the-fly transmission. 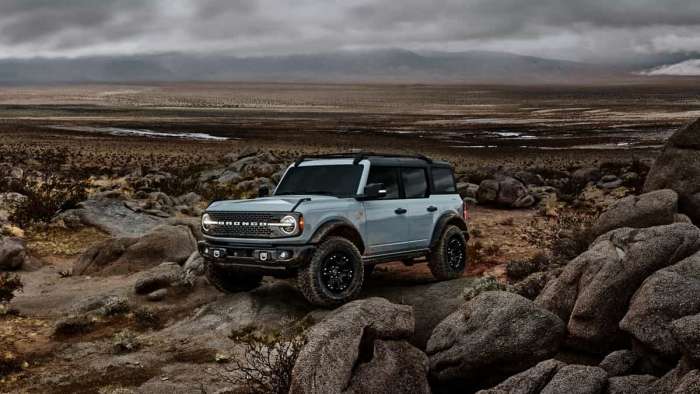 Bronco R Will Be Ready To Go

In the final analysis, the Bronco R will be ready to go to victory when the start flag drops on the Baja 1000 in a couple of months.

The Ford Authority and Trucks.com provided much of the information for this article.