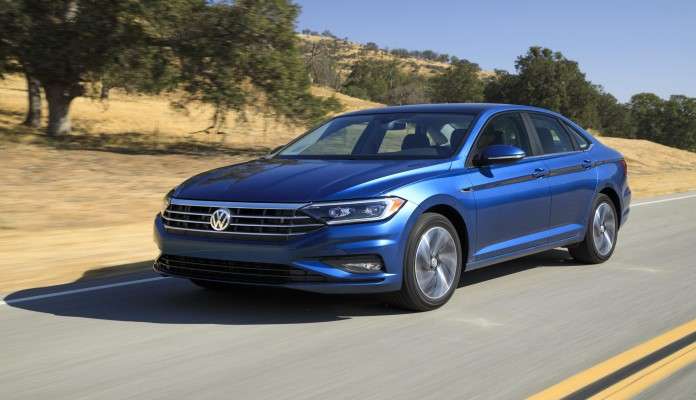 According to some rather broad hints in the press information, Volkswagen has no plans to sell the newly introduced Jetta in Europe. The reason is size. Since the new Jetta is nearly the same size as the Passat, introduced last year, it makes little sense for the automaker to sell a new model that would only cannabalize sales from an established line.
Advertisement

With all of the hoopla surrounding the many vehicle introductions at this year’s Detroit Auto Show (aka the North American International Auto Show, NAIAS), it would have been pretty easy to miss an interesting occurrence. The new Volkswagen Jetta, just introduced by the automaker at the show, to the U.S. market doesn’t look like it will be headed to Europe or the Eurozone anytime soon. In fact, the seven generation Jetta, probably won’t be on sale there, at all.

Built on the corporate MQB platform

The new Jetta, which will officially go on sale here in the second quarter of this year, is built on VW’s corporate, adjustable MQB platform. The platform will underpin VW’s new entries in the future. From hints in the press information regarding the Jetta, observers have deduced that though the Jetta may be going on sale here and in Mexico and China (the Sagitar), it appears there are no plans to offer the new, larger VW in the Eurozone. In a similar twist, the VW Jetta GT is unlikely to see Europe, either. Volkswagen Jetta GT will be U.S. only

Indeed, the word larger, in this context, has a special meaning. The new Jetta is nearly the size of the Passat, introduced last year. Since they are almost the same size, from a business perspective, it makes no sense to bring a new sedan into a market where sedan sales are slowing. One vehicle would cannibalize sales from the other and vice versa. The overlap between them is substantial.

Quite honestly, the decision to keep the new Jetta away from Europe makes sense. The U.S. is the largest and most successful market for Jetta. Since its introduction, Volkswagen has sold 3.2 million of them. The new Jetta has been called by VW “the most successful automobile with German roots” on the U.S. market.

VW’s design team in Wolfsburg, the automaker’s headquarters, designed the new Jetta for overseas – non-European – markets. According to the VW press materials, the Jetta features a “more progressive design” that features “improved interior space” and “efficiency gains.” The newly introduced Jetta is one “of the most technologically advanced Volkswagens today.”

Jetta is scheduled to go on sale in the second quarter of this year. Sales to Mexico are slated to begin a couple of months before those in the U.S. and sales will start late in the year or early next year in China.