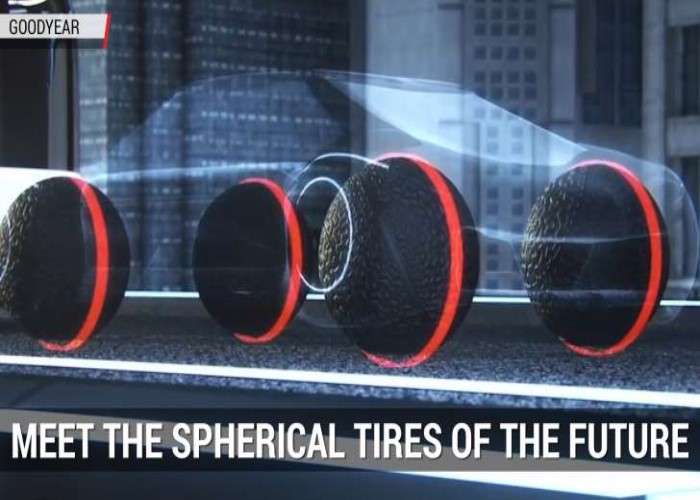 Do you suppose we’ll have to trim and water these tires, too?

Goodyear demonstrated a rather unique type of tire of the future at Geneva. It is a moss-filled, non-pneumatic tire that not only is capable of creating its own electricity, but also helps to clean the air and talks with other tires, as well.
Advertisement

The world’s major car shows – Geneva, Beijing, Detroit, Los Angeles and New York – not only are, as you would expect, hotbeds of cars, trucks, and vehicles of every description, but they are also places where exciting ideas emerge. These are the ideas that, while they seem a bit wild today, will likely become business as usually in the relatively near term.

For example, one of the more exciting concepts that came out of Geneva, in my opinion, was developed by Goodyear. It’s an idea that pushes sustainable mobility, self-generates electricity and controls it all with its own AI or artificial intelligence. Of course, you have to know since Goodyear developed it, it has to be a tire, but, it is probably the most unusual tire you have heard of. I know it has me thinking about what just might be in my own car’s tires in, say, 15 years.

Here’s the plan, according to MSN Autos, Goodyear has been looking at future needs and has come up with a tire series it has labeled Oxygene. Not only does the tire generate its electricity, but it also does so cleanly by using moss. That’s right, in not too many years, we may be driving on tires filled with live moss that both cleans the air, while it also makes its power.

The Oxygene tire uses an open structure that is supposed to encourage the heat-resistant moss to grow inside the sidewall. To facilitate its growth, the tire uses smart treat design. The design absorbs water from the roadway, while also circulating it through the tire. Its own AI system manages the whole system. Also, the tire’s ability to “breathe” allows it to inhale carbon dioxide from the air to feed the moss.

This is the time over the top thinking is needed

It’s not exactly conventional thinking, is it? Indeed, I think it is this type of over the top thought that will help clean up the environment in many ways. Says Carlos Cipollitti, in a video released by the tire manufacturer, the “most … can absorb CO₂ and, through photosynthesis, we can convert that” to oxygen, “cleaning the air.” Meantime, the moss “can generate electricity through that [photosynthesis] process, which also fuels the energy required for the artificial intelligence that this tire will have,” he continued. Cipollitti is vice president of product development for Goodyear’s Europe, Africa, and Middle East division.

The concept tire differs markedly from the rubber you will find on today’s cars and trucks. For example, it is lightweight and non-pneumatic. It is built using 3D-printed rubber powder made form recycled tires.

The tire uses an open tread structure that also can improve its grip in wet weather.

It may seem like sci-fi, but it is real

While both tires may seem like they should be in the realm of science fiction, they do exists. Indeed, Goodyear appears to have built the V2I capability into the AI so that the tires can communicate with the tires on other vehicles through what the manufacturer calls LiFi technology.

The tire also illumination capability so it can signal when a car is turning of braking.

Believe it or not, this is not the first time tire concepts have generated electricity. The BH03 is an ordinary tire that can take the heat made as it rolls and turn it into power.