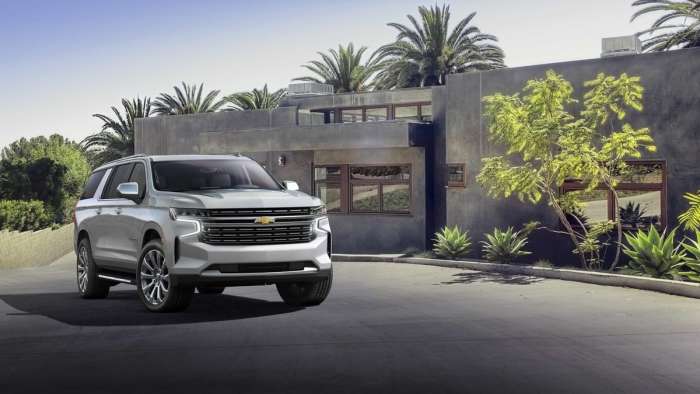 Why Your New 2021 Chevrolet Suburban or Silverado May be Delayed

Chevrolet is doing everything it can to speed SUV and truck production but the automaker is hampered by brutally cold weather and semiconductor chip concerns.
Advertisement

First it was the world-wide semiconductor chip shortage, now Mother Nature is doing her darndest to hamper Chevrolet’s production of its most popular vehicles. Texas continues to be hammered by unusual winter weather and rolling blackouts and the Midwest is dealing with bitter cold and snow. GM was already slowing production at some of its plants to conserve the semiconductor chips for its most important products like the 2021 Chevrolet Suburban, Tahoe and Silverado, as well as the GMC Yukon and Sierra. Now the automaker has had to stop production of its most profitable vehicles because of the bone-chilling weather.

The 2021 Cadillac Escalade, Chevrolet Suburban and Tahoe and GMC Yukon

GM has been forced to cancel a number of shifts at the Arlington, Texas, plant that is building the all-new 2021 Suburbans, Tahoes and Yukons. The area is dealing with rolling blackouts after bitterly cold weather paralyzed the Texas power grid. Wind turbines that produce much of Texas’s power supply have seen their blades frozen in place by the unusual freezing temperatures. Drones are being used to try to de-ice the blades, but so far, the state is still reeling from Mother Nature’s wrath. Even more dangerous weather is said to be headed that way. Temperatures aren’t expected to get above freezing until at least Friday. Even if the plants could restart production, many of the workers are stuck trying to get heat back into their homes and repair the damage from frozen pipes and other destruction. Unlike most northern cities, homes in Texas aren’t built with the type of insulation and infrastructure to protect against the frigid cold. Plus, the snow and sleet covered roads are too dangerous for many to drive.

The huge plant in Fort Wayne, Indiana, that builds GM’s hot-selling light duty trucks has also been temporarily sidelined by the huge snowfall that hit the Chicago area. Some areas in that region received close to 18 inches of snow. Managers were forced to cancel some of the shifts because traveling was just too dangerous. Plus, one of the Tennessee plants that supplies engines for the large SUVs and trucks was also forced to close because of the weather. Closures like these are very rare. The Midwest is used to dealing with adverse weather conditions. Texas, not so much. Most cities in Texas don’t even have snowplows.

“Demand for our Chevrolet Silverado and GMC Sierra full-size pickups continues to be very strong and we are taking action to increase the availability of our trucks for our dealers and customers,” said Phil Kienle, GM vice president, North America Manufacturing and Labor Relations during that announcement.”

GM has also idled other plants to conserve the semiconductor chips so they can use them to build the all-important large SUVs and trucks.

The current weather-related shutdowns should only cause minor delays in production. However, now, there are rumblings that GM may be forced to cancel some of the holiday and summer breaks to try to make up for the lost production, depending on how long the crazy weather lasts.