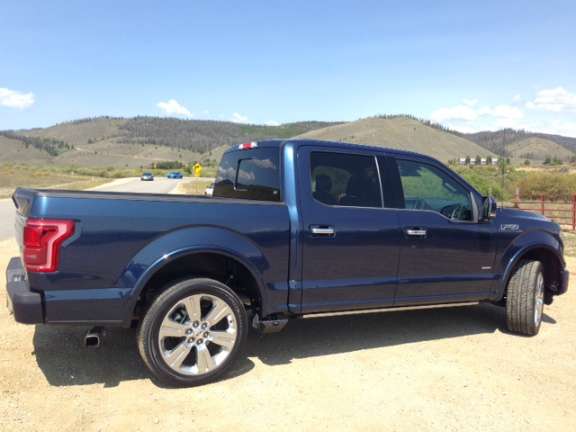 Why you may want to undercoat your aluminum F-150

Much has been said about the 2015 and 2016 Ford F-150s being made of aluminum. Parts of the truck are still high grade steel. Ford has done extensive testing on the new trucks but questions like this one from a Canadian truck fan remain, “Did you get your new truck undercoated, not sure if I should with the body being aluminum? “ The next question is “What is the best undercoating to use?”
Advertisement

There are at least a dozen fan forums set up to address this issue and hundreds of different answers. The questions come from all over the U.S. and Canada. J.B. asks “I just purchased a 16 SuperCrew about a week ago. I live in Ohio where salt is used on the roads during the winter and I'm curious if I should get the truck undercoated. I've heard the trucks come treated from the factory, but I don't know if that's accurate. Is it worth getting undercoated? I really don't want to see rust underneath in two years.”

A truck owner named Rick from south east Michigan sounds like his information is direct from Ford. Rick says, “For corrosion protection, the entire frame is immersed in an e-coat solution and an electric charge is applied. The result is a durable protective shell that bonds with the steel and inhibits rust, even in hidden areas. Ford engineers went to great lengths to inhibit galvanic corrosion, which can occur when steel (and some other metals) comes into contact with aluminum along with moisture. Specially coated bolts, clips and isolated body mounts prevent steel and aluminum from coming into contact.”

Rick adds, “Extensive corrosion testing was also done to ensure the tough adhesives used in the body can stand up to the elements and extreme temperature.”

Aluminum doesn’t rust but it can corrode, getting white spots on it. Steel obviously can rust and often does regardless of the corrosion protection, especially is high-salt areas.

Owners like this one responding to Rick, are very concerned. “That's all true, but have you been under your truck to look at it up close? I did and when I bought the truck brand new there was already a light flash rust on the front of the rear diff housing and a few welds on the frame that had rust spots. This was in the summer, before any salt or snow.”

A 2016 F-150 owner who goes by FoxTrot says, “I just ordered a Gallon of "Fluid Film Undercoating" and the equipment to spray it. This stuff never dries so it won't trap moisture. It does need to be re-applied ever year on exposed areas. And it creeps into the seams, nooks and crannies.”

There is a lot of concern that drilling any holes into the panels to apply rust proofing could void the factory corrosion warranty. “I got the Corrosion Free treatment done at a Canadian Tire in Windsor. They did a great job and spent about 1.5 hrs spraying my truck! I told them to not do any drilling at all. They just stuck the wand into some of the existing drain holes in the doors and door sills and sprayed what they could. I'm not that worried about the AL corroding and didn't want to void the factory corrosion warranty, in case there is some sort of recall, etc.”

The various truck owners seem to like Fluid Film, Krown and Corrosion Free as the best undercoating for the aluminum F-150s.

Torque News reporter Marc Stern warns that the vehicle must be properly prepared for the undercoating to work, if not the coating can do more harm than good. Stern says "I followed them closely and they seemed great. That is until they started to be applied poorly because the vehicles were never prepared right. Vehicles have to be super clean and super dry before you can even think of putting that junk on there. All that happens is if there is any moisture, the moisture is trapped and it begins to eat away at the metal, after it has a nice dinner on the clearcoat, cover coats, primer, electrophoeretic paint and then yum, the bare metal."

bobby wrote on February 28, 2017 - 5:08am Permalink
I have been doing sheetmetal work on airplanes for a long time and 90% of my work is changing corroded parts on aircraft. I can promise you that no amount of paint will protect your frame from rotting in half in a few years. The amount of measures that aircraft operators go through to prevent corrosion far exceeds painting the structure and it doesn't work. You would have to pay me to take an aluminum truck, airports dont use salt on the runway like the state roads do in most states so if you live in the north anywhere then you might get 1.5 to 2 years out of the truck until you walk out of your house and find a pile of dust where your bed used to be. If you do buy a truck get a corrosion prevention package if you can so you can get a new truck every couple of years. All it takes is one piece of gravel to fly up and chip the paint and you will never notice until your foot goes through the bed or you take your bed off the truck once a month and go over it with a 10x.
yep wrote on September 24, 2017 - 1:23pm Permalink
So Ford Spent millions in retooling, training and advertising to make a truck that will rot out in two years in all parts of the country?
Flyboynextdoor wrote on October 25, 2017 - 2:47pm Permalink
I've been flying airplanes a very long time in Northern Canada where they do use chemicals to deice the runways, many of the airplanes I've flown are so old (30yrs +) the paint is missing in many many areas. And these things are fine... A 6yr old steel truck on the other hand is rotting out at the fenders and can corners... I think Ford was smart as hell to make an Aluminum truck. There are a ton of 2015s on the roads up here now and they all look fine to me.
Pete Rossi wrote on November 28, 2018 - 8:50am Permalink
I Live in Vermont, I’ve had a 2004 Ford F-150 since 2005.. The cab corners finally got soft after 13 years of driving On salty roads, though I washed the vehicle and maintained it.. I now have a 2016 aluminum body ford F-150 this truck will outlast my 2004 easily
Anthony wrote on January 5, 2019 - 6:19pm Permalink
Bobby, three years running here in Michigan and not a corrode aluminum F 150 yet or a pile of dust in anyone's driveway. ....you are kinda an idiot...lol
Davud Brown wrote on October 17, 2019 - 11:31pm Permalink
I think you need to take a metallurgy class. Aluminum does not rust. It may corrode a bit forming aluminum oxide on the surface but is far superior to carbon steel which will eventually turn to dust as you say,
Ken wrote on November 13, 2019 - 4:43am Permalink
Why would you get a corrosion prevention package and THEN get a new truck every couple years. That's stupid! You must work behind a sales desk at a dealer.
Rob Cunha wrote on July 11, 2020 - 6:14am Permalink
What he means is, get the undercoating protection plan Ford offers and when it trusts in 2 years the warranty will have to give you another truck.
Pierre Verdoni wrote on March 5, 2020 - 8:56pm Permalink
Not a good comment from a guy using bobby for a username..no wonder I would hide my REAL name also.
Dale wideman wrote on July 29, 2017 - 5:51am Permalink
I had a 1997 Ford E 250 that I was taking to the scrap yard and one day one of my commercial neighbours came over to inquire about some electrical work. He spotted the van and asked me what year it was I told him the year and he became very was interested as he runs a fleet of aluminum body delivery trucks kinda like the UPS trucks with no doors and the only motor that will fit is a 1997 - 5.3 Ltr the truck he was putting it in was going on its third motor .Not sure how many miles this thing had on it but it didn't look in to bad of shape and looked like it was ever under coated . we live with salt and calcium on the roads every winter . I would think fords aluminum bodies have a better life span of the typical 10 year run with steel bodied trucks whatever the make so I bought one and I guess we will see
Dale Gibson wrote on February 5, 2018 - 9:00pm Permalink
I have a 2018 f150 and want to put the 5th wheel rails in it along with a bolt on frame kit as I don't see the need to drill holes in these fame parts. What do you guys recommend I do to prep or coat the bed where the 10 bolts go thru to secure the rails?
Joe Helwig wrote on December 12, 2018 - 12:49pm Permalink
Mastinox or Corban antcorrosion sealant. Mastinox is better but very toxic. Both are the same mil spec.
Noah wrote on July 30, 2019 - 6:44pm Permalink
I own a 2018 and have zero rust issues. On Saturday I went to the local Ford dealer and looked at a 2019. The engine looked like it had salt water corrosion all over it. The bolts and anything not aluminum was covered in rust. The muffler bracket was rusted and there was surface rust all over. Buyer beware.
Sacha Hindle wrote on December 8, 2019 - 8:25pm Permalink
I am a green type person...I change the oil in my truck then reuse the oil to spray the underside of the truck, then burn the rest of the oil in my furnace.
Zolton wrote on December 26, 2019 - 12:46pm Permalink
DO NOT re purpose old engine oil to undercoat your vehicle. There are contaminants in it that will cause your vehicle to corrode as if you never rustproofed at all. Maybe worse. If you fancy yourself a "green type" person, take your used motor oil to an oil recycling depot.
Henry Battle wrote on November 8, 2020 - 6:57pm Permalink
I live in Michigan and just bought a 2020 F-150. Should I get it undercoated yes or no