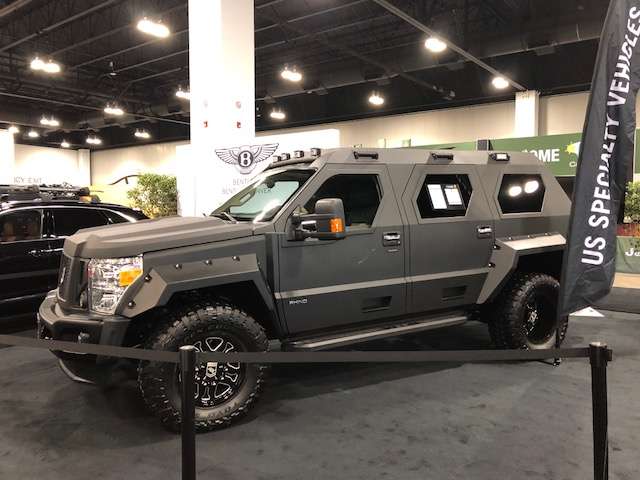 Why they call the Rhino GX the Ultimate Luxury SUV

Walking through the Denver Auto Show, I was struck by the appearance of the Rhino GX. It is a massive vehicle perched on 38" Toyo M/T tires.This is why USSV calls the Rhino GX "the ultimate luxury SUV".
Advertisement

The Denver Auto Show has more than 500 different vehicles and the Rhino GX stands out in any crowd. USSV or US Specialty Vehicles builds the massive 4x4. On its website, USSV says the SUV unites power and luxury. “The USSV Rhino GX is one of the largest luxury SUVs available on the market. Nothing can compare to the unique combination of the Rhino GX’s large, rugged exterior and spacious, deluxe interior. The Rhino GX will take you from the wilderness to a night on the town in style.”

It also looks like it would take you to a warzone if need be. The vehicle on display in Denver supposedly seats 7 people. It looks like it could carry an entire hockey team.

No wonder the Rhino GX looks so big. It is big! According to the USSV team, the vehicle is hand built, in California, on a Ford F-450 Super Duty body. USSV adds a military strength steel body, special hydraulic suspension as well as different windows and doors. The Rhino GX at the auto show has a 6.7-liter Powerstroke V-8 diesel, but you can also get it with a 6.8-liter V-10 Ford engine. On the company’s website, it lists the GVWR as 14,000 pounds. In person, the Rhino GX looks more like a military vehicle than a Ford truck, but that is the intent. The behemoth is 225” long (over 18 feet), 96” wide (8 feet), and 88” high (more than 7 feet). It is not armor-plated, but apparently the company knows someone who will do that for you, if you desire.

The Rhino GX’s interior looks more like a high-end den than a vehicle. The leather seats are incredibly thick and plush and the wood detailing is beautiful. USSV has spared no expense. “Quality checks are conducted at every level of the build process to ensure the final product is solid, strong and built to last. ‘Hand-built details on a rugged road warrior’ describes the design essence and philosophy behind the Rhino GX.”

The Rhino GX is not only huge, but is designed to handle extreme off-roading. “High intensity light bars adorn the front and side roof of the Rhino GX, for a spectacular night time look and added off-road functionality. Blaze a trail anywhere - and at any time - comfortably and safely.”

The Rhino GX includes all the latest bells and whistles, navigation, front and rear cameras, as well as a premium infotainment system.

The “rugged road warrior” will cost you dearly. The textured paint alone is a $10,000 upcharge. The premium model on display in Denver stickers at a whopping $262,945 and that doesn’t include taxes and dealer preparation! It certainly is the SUV that will stand out in the crowd. The best thing about auto shows is that they let you dream big. I'm sure there are days on the highway that everyone would want a Rhino GX.