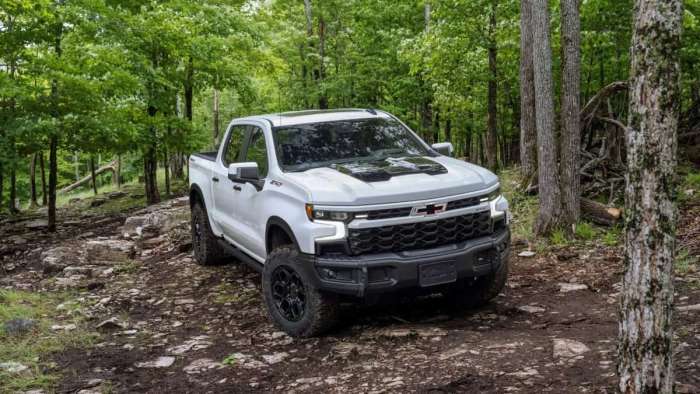 The off-roading craze really accelerated during the pandemic shutdowns and it shows no signs of abating. After the tremendous success of the Colorado ZR2 Bison, Chevrolet decided to upgrade the 2023 Chevrolet Silverado with a Bison version as well. The 2023 Chevrolet Silverado ZR2 Bison features rocker protection, unique skid plates, stronger front and rear bumpers and other enhancements guaranteed to improve the off-road experience.

ZR2 Customized with the Help of American Expedition Vehicles

AEV specializes in premium off-road aftermarket customizing, with an eye toward overlanding. That is why the underbody reinforcements are so important. Whether the driver is heading out to the trails for a day or to the back country for weeks, the improvements will make for a smoother, more successful journey. GM engineers worked with AEV on the proposed changes to improve the truck’s performance in the off-road environment.

“Our most recent collaboration with AEV resulted in the much-acclaimed Colorado ZR2 Bison. We’re thrilled to team up again to bring customers Chevrolet’s next chapter of off-road dominance, this time on Silverado,” said Scott Bell, Chevrolet vice president. “The 2023 Silverado ZR2 Bison unlocks the pinnacle of the nameplate’s off-road capability.”

The AEV-stamped steel front and rear bumpers are constructed of 3-millimeter-thick steel and are powder and e-coated. The press-hardened steel used for the underbody skid plates is three-and-a-half times stronger than an equivalent cold-stamped high-strength steel plate and provides incredible resistance to underbody damage.

Other Standard Bison Features Include:

The 2023 Silverado ZR2 Bison comes standard with a 6.2L V-8 engine paired with a 10-speed automatic transmission. The truck has 420 horsepower and 460 lb.-ft. of torque to handle tough back country or off-road terrains. Buyers can also opt for the popular 3.0L Duramax Diesel. GM estimates that the Duramax can deliver max horsepower of 305 and max torque of 495 lb.-ft.

The Bison has specific off-road chassis and suspension calibrations, including Terrain Mode, which allows one-pedal rock crawling. It comes with front and rear e-lockers and Multimatic 40-millimeter DSSV spool-valve dampers.

The Silverado ZR2 Bison is expected to start production in early 2023 with an MRSP of $78,490 which includes destination.